Kyrgyzstan, also known as the Kyrgyz Republic, is a landlocked country located in the heart of Central Asia. It is bordered by Kazakhstan, Tajikistan, Uzbekistan, and China.

The Tien Shan mountain range cover roughly 95% of the country. Kyrgyzstan has a polar climate in the Tien Shan Mountains, a subtropical climate in the Southwest, and temperate climatic conditions in the Northern foothills. The average low temperature is 4.8°C while the average high temperature is 17.0°C.[2] Shrub land, savannah, and grassland make up 56% of the land and cropland compromises 27%. The land area covered by forest is 4.5% but is decreasing.

Kyrgyzstan's population is 5.57 million and the population density is 27 people per square kilometer. Urban population compromises 35% while the rural population makes up 65%. The literacy rate (age 15+) is 98.7%

Kyrgyzstan also has locally exploitable coal, oil, and natural gas.It was the first country in the Commonwealth of Independent States(CIS) to develop an independent regulatory agency for economic regulation of the energy sector. Primary energy shares in 2008 comprised of the following : Hydro 31.8%, coal 18.5%, gas 21.5%, oil 28.1%, renewable and waste 0.1%. [4] Approximately 95% of the population is connected to the grid. Losses in the distribution system range from 40-50% and reliability is poor. Electricity losses are greater in residential areas than non-residential areas and bout 30% of the distribution systems need to be replaced. 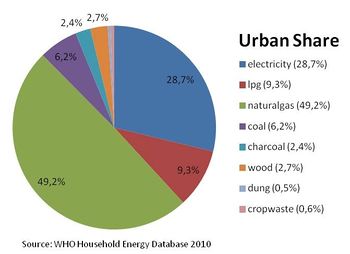 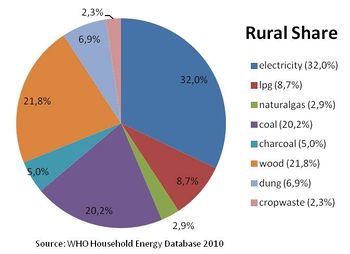 Solid biomass will become even more popular with the current outages of power, eventual tariff increase, and world pricing trends.The percentage of the population using solid fuels (charcoal, coal, cropwaste, dung and wood) as cooking energy is summarized below:

Impact of Solid Fuel Use on Health

There are, however, some potentials for solar energy and large scale and micro-hydro power plants. There are about 2,600 hours of sunshine per year and radiation is 1,500-1,900 kW/m² per year. In addition, a law on renewable energy was adopted in 2008. It includes biomass small scale projects, small hydropower programs, solar small scale projects and wind energy in the national program. Finally, some biogas plants have been established, but only by private initiatives.

Retrieved from "https://energypedia.info/index.php?title=Kyrgyzstan_Energy_Situation&oldid=350134"
Categories:
Hidden category:
Cookies help us deliver our services. By using our services, you agree to our use of cookies.