The report "Development of Implementation Strategies for a Regional Regulatory Action Plan (RRAP) for the Western Cape" prepared by GIZ sets out the possible land development regulatory hurdles to be cleared by a prospective investor in renewable energy[1].

It assumes that the majority of proposed renewable energy developments, including wind, hydro power and solar thermal or Photovoltaic (PV), are likely to trigger off a number of regulatory requirements because they will require:

There may be some projects where a change in land-use is not required, such as some landfill gas projects or urban solar PV projects.
A sub-division of land parcels may be required to facilitate the purchase of a smaller land parcel or may be connected to a subsequent consolidation of land parcels in order to reconfigure the cadastral boundaries of the land to meet the project’s needs.

Most projects will also involve a change of land use. This triggers off requirements for approval in terms of e.g. land use planning ordinance, environmental acts, heritage acts. A requirement of all these laws’ procedures is that the applicants must either be the owner of the land in question or have the written consent of the land owner. If the applicant wishes to own the land then obviously he or she will need to engage in the purchase of that land by way of commercial transactions with existing land-owners. As noted above, in most cases such purchase will require the reconfiguration of existing cadastral boundaries, hence the assumption that subdivision will be required at some point in the land acquisition process. The applicant may decide to avoid actually owning the land but rather engage in long-term leasehold arrangements with existing owners. Either way, these processes will be concluded independently of regulatory authorities.

A number of pieces of legislation need to be complied with in the case of the subdivision of land.

Subdivision is likely to be needed either where parts of a farm that are suitable for renewable energy production are separated from those retained for other purposes or where various portions of various farms need to be excised from the current farms and consolidated into a new property.

Land Use Planning Ordinance (LUPO)
Under Chapter III of the Land Use Planning Ordinance (LUPO), applicable in the Western and Eastern Cape provinces, permission to subdivide any land has to be obtained from the relevant municipality and a rezoning to Subdivision Area under some land uses/zonings is required before the subdivision can be approved. The applications for this rezoning and the subdivision may be
submitted simultaneously.

Change of Land Use

The legal processes related to a change of land use are distinct from those of sub-division although there is a relationship between the two (rezoning likely has to be approved prior to approval for subdivision being granted).

In the case of Western Cape - Changing the use of land – primarily in this case from Agricultural to a land-use zoning that
permits, say, wind farming requires permission in terms of the Land Use Planning Ordinance as well as the National Environmental Management Act, 107 of 1998. The NEMA authorizations are dealt with elsewhere so this section focuses on permission in terms of LUPO. It is important to note that in the Western Cape there is a policy in place to the effect that an application for change in land-use may not be considered in terms of LUPO until the NEMA authorization has been granted. This clearly may introduce additional delays in the process.


In terms of LUPO (section 14) all land in the Western Cape that does not fall within an existing zoning scheme is ‘deemed to be zoned in accordance with the utilisation thereof’ with effect from the date of commencement of the relevant ordinance (Ord. 15 of 1985) (LUPO). The process entails an enquiry of a factual nature into the purpose for, and manner in, which the land referred to was actually being used as at 1 July 1986, the date on which LUPO commenced. The current use of land, therefore, has no relevance in respect of a deemed zoning and in the case where the deemed zoning and current land use are at odds, a rezoning in terms of Section 17 of LUPO is required.


Thus even though land has never been formally zoned for a particular use it is deemed to be zoned in terms of the most restrictive zoning that would nevertheless permit the use on the date on which LUPO commenced. So, for example, land that was being farmed will be deemed to be zoned ‘agricultural’ in terms of the applicable provincial zoning regulations. A prospective renewable energy developer is therefore likely to have to rezone the land on which the renewable energy facility falls, through an application to the municipality concerned.


An applicant, unhappy with the outcome of a rezoning decision taken by a municipal Council, first has the right of appeal in terms of Section 62 of the Local Government Municipal Systems Act, 2000 (Act 32 of 2000). Once the process for applicant's exercising their right of appeal in terms of the Municipal Systems Act has been concluded, the applicant and any person who objected to such application, shall be afforded the right of appeal against such decision to the Minister of Local Government, Environmental Affairs and Development Planning in terms of Section 44 of LUPO.
The Western Cape province has a set of general Zoning Scheme regulations, in terms of section 8 of LUPO, that apply to all land outside of specific, municipal Zoning Schemes. There is no zoning in terms of these regulations that would specifically permit the operation of a wind farm or other renewable energy development. Unless these regulations are changed by the Provincial government the best option would be for the rezoning of the land to ‘Special Zone’ (paragraph 3.28 of the regulations).


The purpose of a ‘Special’ zoning is to accommodate a situation where ‘special factors justify the creation of a new zone on the zoning map for a site or sites without justifying the creation of a new zone in the scheme regulations’. It could certainly be argued that the need to generate renewable energy is such a ‘special factor’. In the longer term however it would probably make sense to revise the scheme regulations to provide specifically for either renewable energy generically or specific types of renewable energy such as wind farms, solar thermal plants, mini-hydro schemes and so forth.

In certain cases – determined by factors that include the scale of the proposed project, whether or not there is a need to demolish or change buildings over XY years old or whether the proposed project is on or near to a national or provincial heritage site – a permit has to be obtained. In all cases it is advisable to consult the responsible Agency, or a knowledgeable heritage management consultant. It can become likely that a Heritage Impact assessment is required.

The first step for a prospective investor is to deal with the land ownership issues. He or she needs to do one of the following or, in some cases possibly a combination of the following in relation to different land parcels:

The second step is the application for an environmental authorization. (This is necessary in the Western Cape before the rezoning application can be considered. It is also important to note that the project should also be in compliance with the regional Strategic Environmental Assessment, as shown in figure below. It is advisable to carry out a Heritage Impact Assessment at this stage too, should it be required. It is important to remember that the need for an environmental authorization in terms of NEMA is triggered both by the change of the land use and, in most cases, the subdivision of land (a subdivision of portions of land 9 hectares or larger
into portions of 5 hectares or less will trigger an EIA). 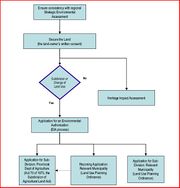 There are some additional considerations that should be considered by developers in relation to securing the required rights to land.

Retrieved from "https://energypedia.info/index.php?title=Land_Acquisition_-_Wind_Energy&oldid=118484"
Categories:
Cookies help us deliver our services. By using our services, you agree to our use of cookies.