Based on long-term corrected data of the wind measurements on site, a wind potential map has been calculated (using WindPro and WAsP software), providing information for the distribution of the average wind speeds over the area foreseen for the implementation of the wind park (Figure 6-1) and therefore being a base for the wind park layout development process. Figure 1 shows an example for a wind potential map for the Ashegoda wind project in Ethiopia.[1] 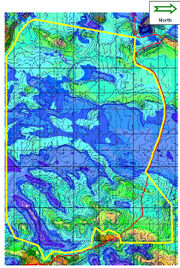 In this map, it can be clearly seen that ridges in the west and and in the east have considerably more favourable wind conditions than the plain in between, caused by the shadowing effects of the ridges and the speed-up effect atop a hill. In this example military installations north of the road (red line) are limiting the wind park area to the region south of the road until it reaches the eastern ridges. The villages around the site (orange areas) are furthermore restricting the available space, as noise emissions from the wind turbines and the shadow flicker caused by the moving turbine rotors cause stress to the inhabitants of these villages if specific values are exceeded.

Typically, wind speeds are higher with increasing levels above ground. For that reason higher towers can exploit higher wind speeds so that the annual energy production can be increased correspondingly. The counteracting effect is the respective additional investment cost for the tower and the foundation. In some countries available crane capacities could be a further limiting factor.


The following table will present the costs of several turbines types in connection with different hub heights showing the effect of higher hub heights described above:

This calculation was done with official market prices for the wind turbines of the named manufacturer and the production estimation is connected to the wind conditions at the Ashegoda wind park site. On the x-axis the standard hub height of the selected turbines in meters are plotted, and on the y-axis the specific investment costs in /kWh are presented, calculated by the estimated investment costs devided by the expected annual energy output (P75-value).


The use of larger hub heights, above 60 m and up to 100m will cause higher costs for towers, foundations and the erection period, as well as higher crane costs.

Besides wind speed characteristics the choice of hub height depends on the terrain: For example the Ashegoda wind project site in Ethiopa has a quite wind speed characteristic (characterised as wind class III b according to the IEC regulations) and the terrain at the site can be described as complex. Therefore the extrapolation of the wind speed at higher hub heights compared to the height of the measuring mast is associated with comparatively high uncertainties. These uncertainties could be reduced using higher measuring masts or higher order models for the flow calculations like mesoscalic models like KLIMM.

If these advanced options are not available, it will be necessary to choose a hub height, which does not exceed the height for qualified wind regime predictions for the specific site characteristics. At the Ashegoda site meaningful prediction of the wind regime was considered possible up to hub heights of 50 to 60 m. Thus the costs related to these hub heights have been considered in the feasibility study for the Ashegoda wind park.

Determination of the Optimal Unit Size

The selection of the wind turbine type is depending on several criteria, such as:

Wind turbines in the Multi-Megawatt range require a higher level of maintenance to be performed by the turbine manufacturer - compared to proven turbine types in the range below one Megawatt. In addition, proven in the past, almost all wind turbine manufacturers are not willing to offer turbines in the Megawatt class for countries which are just entering the wind energy market.

For the first projects realized in such countries, it is therefore strongly recommended to start with proven wind turbines. This will have the following advantages when compared to wind turbines with larger capacity:

The specific investment costs in Euro per generated MWh per year for two selected 2 MW wind turbines compared to the 0.8 MW turbines of the same manufacturer are displayed in the following table:

Additional Assumptions for V80 and E-70:

This calculation is clearly showing the higher specific investment costs of the Multi-Megawatt-turbines compared to the 800 kW turbine class. If there is sufficient space available at the site (which is a limiting factor in most European sites today) to set up the installed capacity with smaller turbines like the 800 kW turbines in the example, a smaller turbine class could be a preferred choice, in case the transportation of large turbines to the site is difficult and connected to additional costs.


Furthermore delivery time could be an important variable: Generally spoken smaller proven wind turbines have shorter delivery time as the large multi-megawatt machines. Thus, developers of a wind project have to conduct a small survey, which provider of wind turbines is able and willing to deliver the turbines to the country the project is located.


For the Ashegoda wind project the minimal distances are summarized in the following table. As the wind turbines at this site should be erected in a single row, the distance of the turbines in the prevailing wind direction is not considered. If space is not a limiting factor for a wind park, the placement in a single row is very benificial because an important part of the wake effects can be avoided.

The wind potential map (see Figure 1) provides information of the areas with the most favourable wind conditions (the areas shown in greenish colours, followed by light blue); wind speeds at the plain (dark blue) are up to 2 m/s lower compared to the ridges, resulting in a concentration of the wind turbines on top of the latter. In order to minimise the wake losses, single lines of wind turbines with considerable distance between the individual rows are more preferable than clusters of turbines, leading to the layout-example shown in Figure 3.

In the example layout the orientation of the central part of the eastern ridge nearly parallel to the main wind direction (southeast) prevents the more intensive usage for wind turbines as these will be situated behind each other in the main wind direction while the village at the eastern edge of the wind park area limits the length of the southeasternmost row of turbines. Further wind turbines at the northern end of the row will cause the exceedance of the noise level limits for the village. Similar limitations exist for the northern end of the westernmost row of turbines.

Figure 4: Layout example for the Ashegoda wind park in Ethiopia


The impact of the turbulence to each individual wind turbine can be calculated and analysed by means of the WindPro software package using for example the Frandsen Turbulence Model[2] (as recommended in IEC 61400 1, Rev 3) for GFK-Materials (rotor).


The calculated annual average, direction weighted turbulence for each individual wind turbine has to be lower than the critical values of 16 % turbulence intensity for a IEC class A turbine and 14% for a class B turbine at a wind speed of 15 m/s. Furthermore, the calculated annual average, direction weighted turbulence curve has to remain below the the IEC A and B curves for the whole range of wind speeds occurring on site.


New studies show that the Frandsen-Model overestimates the turbulence applied to the turbines. The Empirical Turbulence Dutch TNO Laboratory 1993 Model could be chosen as alternatively. A consultation of the manufacturers of the wind turbines for checking the turbulence impact is generally required.

The target of the noise assessment is to investigate the potential noise impact of the wind turbine operation on sensitive areas in the vicinity of the wind farm. The advisable distances between residences and the proposed wind turbine sites depend on a variety of factors including local topography, eventually background noise and the size of wind farm development. Official demands with regard to noise limit values for the operation of a wind park in Ethiopia are not specified. Therefore a prediction of the sound produced by the proposed wind farm in the surrounding area and an optimisation of the micrositing was made in accordance to the strict German noise limit regulations.


The calculation method is specified in ISO 9612-2 and implemented in the WindPro software used for the estimation of the noise effects. The sound emission data used in the calculation and the sound power level of the turbine bases on information given by the turbine manufacturers. Correspondingly the following standard values for noise emission can be considered depending on the utilisation of the area:

Considering that identified noise sensitive areas can be assigned to the Village centres with mixed utilisation, the limiting noise standard for the operation of the wind farm in the example of Ashegoda is an impact level of 45 dB (A) at night time.

When the sun is just above the horizon, the shadows of the wind turbine generators can be very long and can move across houses (windows) for short periods of time. If this happens for longer period, it causes stress to the inhabitants. The exact position and time period of shadow can be calculated very accurately for each location, taking into account the structure of topography and the movements of the sun. Official Boundary levels are not existing for the shadow flicker effect. In Germany, a commonly accepted value is the maximum of 30 hours shadow caused by the wind turbines per year, and 30 minutes shadow per day.

The estimations are carried out for the worst case that the sun is always shining, 365 days per year. An additional calculation can be performed using the real sunshine probability.

Retrieved from "https://energypedia.info/index.php?title=Layout_of_Wind_Projects&oldid=118485"
Categories:
Cookies help us deliver our services. By using our services, you agree to our use of cookies.