The Kingdom of Lesotho is an enclaved, landlocked country in southern Africa completely surrounded by South Africa. It is just over 30,000 km2 (11,583 sq mi) in size and has a population slightly over two million. Maseru is the capital as well as the largest city in Lesotho. [1]

The country has a continental temperate climate that is characterized by very distinguished different four seasons, as the temperature varies from -10 degress in winter to +30 degrees in summer, and receives most of its rainfall between October and April[2]. 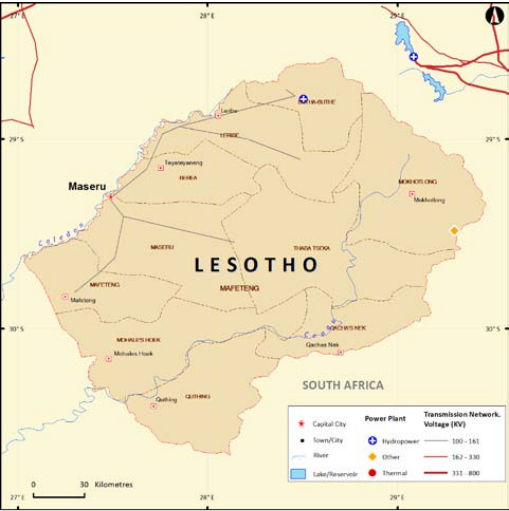 Most of the electricity produced is based on hydro sources, however the country requires energy imports from neighbouring countries to meet its demand. Lesotho produces about 72 MW from hydropower (Meula). It has about 150 MW peak power and imports more than 70 MW mainly from Mozambique (29% of peak demand) and 20% of its peak demand from South Africa. The electricity supply accounts only for +-50% in the energy mix. The National Policy 2015-2025 is the sector guideline and it envisions the development of the renewable energy sector.

An Overview of The Main Energy Sources

In addition to the hydropower abdundance in Lesotho, the country also relies heavily on biomass fuels to meet its major rural population basic needs of cooking and heating space[2][3][4]. The country does not have any proven fossil fuels sources, hence it does not produce any crude oil, consequently there is a huge dependency on imported fossil fuels[3][4][5].

The country is renowned for an abundant supply of unspoilt and unexploited water resources, capturing approximately 50% of Southern Africa's total catchment run-off, therefore, hydropower contributes to most of its electricity needs[2][4].

When it comes to energy access, Lesotho is considered one of the lowest in Africa[4]. Though there was a noticeable annual development since the beginning of the 2000s, yet the country has reached its maximum between 2015/16, which when compared to other countries, would still be relatively small[4][11][12].

The major percentage of access is concentrated in urban areas, where the infrastructure for transmission and distribution is considerably well-developed, with rural areas represent approximately 10.2% of the grid-served areas and about 47% of the urban areas have access[4][12]. 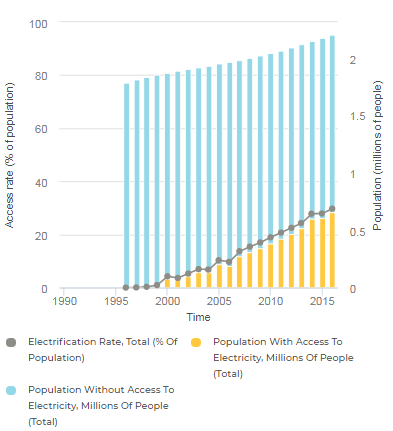 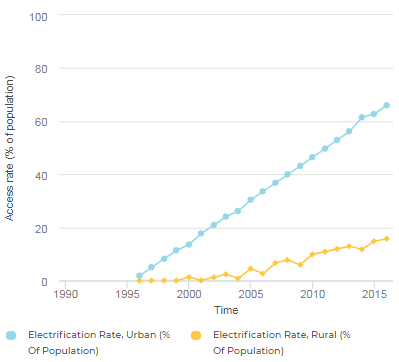 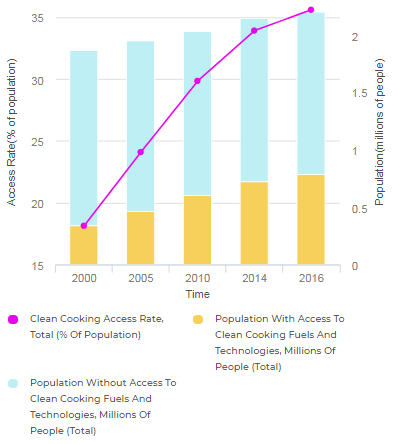 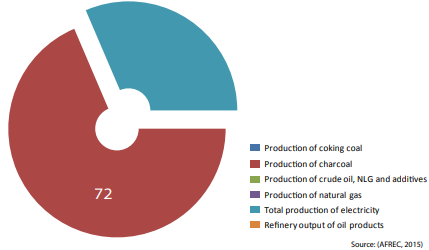 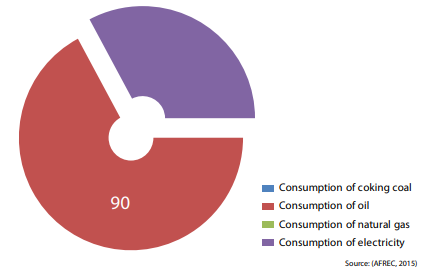 Lesotho seeks importing electricity when the national demand exceeds the annual average national production (~72MW), and the imported amount is approximately around 66MW, such electricity deficit is mainly imported from Electricidade de Mocambique (EDM) in Mozambique and Eskom in South Africa, which is within the Southern African Power Pool (SAPP)[4][5][15][16].

Hence the country has no proven fuel resreves of any kind, so there is near to nothing any exports in that sector[13][17][4].

All Lesotho's imported oil prodcuts come from South Africa, with three muli-national companies operating in Lesotho in that field, as they import and store the products in bulk storage facilities before they redistribute them through the country[18].

Despite the abundancy of hydropower in the country, yet Lesotho is to be considerd far from being energy secure even on the short term.

This state of energy insecurity is a result of many barriers with which the country struggle in general, and the energy sector in particular, and they can be summed in the following[18][11][4]: 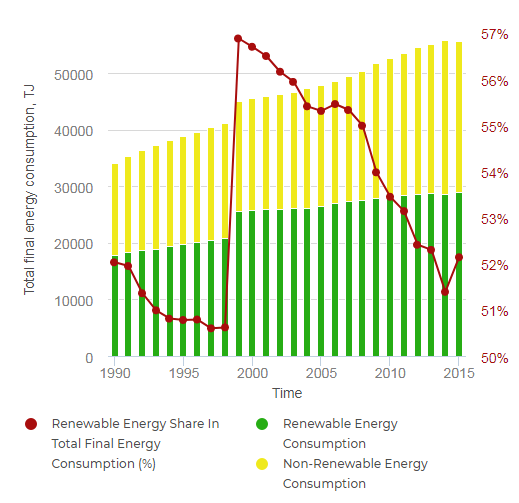 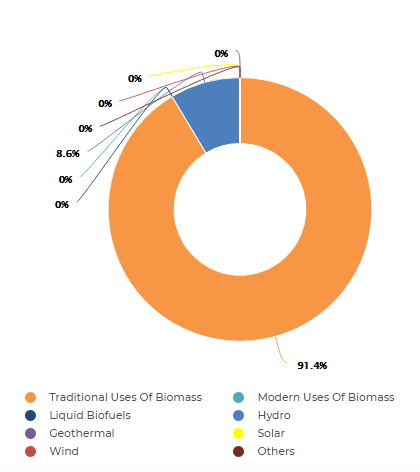 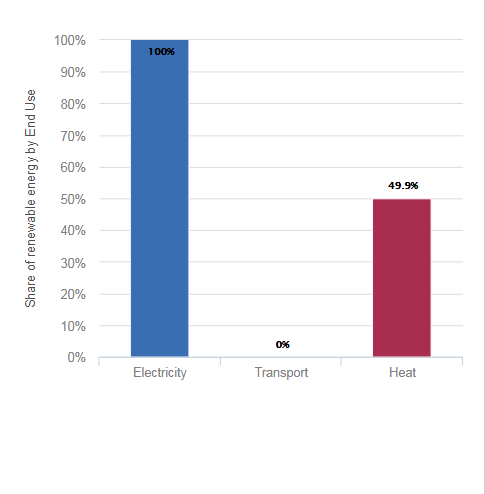 Fig.9: Renewables' Consumption Depending on End Use in Lesotho (Tracking SDG7, 2018)

The country has no records of any proven fossil-fuels reserves, consequently there is no production value or exporting capacity, and almost all its oil products' consumption comes through importing form South Africa[13][17][4][14][21], as explained in the Import & Export section.

Key challenges in the energy sector [9]

The National Strategic Development Plan (NSDP) is a strategy that aims to contribute to the broader National Vision 2020. The document explicitly highlights the fact that there is a potential for energy generation based on renewable sources, provided financial resources are available. The energy sector is regarded as a source of economic growth, climate change mitigation and eventually export revenues. For that the strategy articulates three goals:

The policy document aims to achieve the goals articulated in the NSDP. The policies pivot around principles such as sectoral integration, stakeholder participation, environmental sustainability, gender equity or public private partnerships.


The Energy Policy establishes 15 sub-policies which can be grouped in the following themes and is further disaggregated in general strategies, but no specific activities and monitoring indicators are set:

- Establish and sustain a platform for energy stakeholder coordination

- Develop standards, codes of practice and specifications for mini and off-grid solutions.

- Impose and collect levies on energy services and products

- Develop a database of local institutions and resources currently available to undertake energy-related research and analysis, and thereafter, assess skills and expertise thereof.

- Establish a support programme for the co-financing of energy research activities.

- Create an enabling environment that encourages investment in the energy sector. This may include facilitating the establishment of international/local and/or public/private partnership and Renewable Energy Feed-In-Tariffs (REFIT) programme.

- Promote research and development in the field of bioenergy and associated technologies for power generation, heat and fuel production
- Facilitate the establishment of Rural Energy Service Companies (RESCOs)

- Develop legal, regulatory and institutional frameworks to ensure security of energy supply and increased number of players in the electricity supply industry


The purpose of this facility is to channel funds towards the development and expansion of electricity service infrastructure. Furthermore, funding training programmes for communities and research to promote the access to electricity in neglected areas.

Ministry of Natural Resources or Ministry of Energy, Meteorology and Water Affairs

Institutional Overview of the Energy Sector in Lesotho [9]

From August, 2004 until April, 2013 the Authority was mandated with regulating the electricity sector. In 2007 the Government decided that the Lesotho Electricity Authority (LEA) should be transformed to be a multi-sector regulatory body assuming additional powers to regulate urban water and sewerage services in the country. LEWA officially started regulating both electricity and urban water and sewerage services sector on May, 2013. The Authority independently deals with matters such as electricity pricing, complaints handling and resolution and the supervision of the implementation of the Quality of Service and Supply standards (QOSSS) by its licensees.

The Basotho Enterprises Development Corporation (BEDCO) is a parastatal of the Government of Lesotho. The primary responsibility of the Corporation is the establishment and development of Basotho-owned enterprises. The main focus of BEDCO has been on entrepreneurial capacity building to promote the development of entrepreneurship in Lesotho. BEDCO has formal working relationships with both local and international business support stakeholders.

The  Appropriate Technology  Section  (ATS)  of  the  Ministry of Communication Science and Technology,  an  institution  that  was  mandated  to  undertake  appropriate  technology  research,  the development and application of these technologies, and the dissemination of economically viable results thereof.

In November 2011, Lesotho revealed plans for the Lesotho Highlands Power Project, under which a 10 gW renewable energy power-plant will be built. Unnamed Chinese firms will provide loans to finance about 80% of the project which is expected to cost 110 billion ZAR. Equity for the project will come from Breeze Power, a joint venture between the Lesotho government and South Africa's Harrison and White Investments.
Of the 10 gW of power, 6 gW will come from wind energy, and 4 gW will come from pumped-storage hydro power. Construction on the first phase of the project is slated to begin in 2012 with the construction of a 150 mW wind farm. By 2016, 600 mW of the wind capacity is planned to be online. As part of this project, manufacturing facilities will be built in Lesotho and South Africa.

The project involves the development of 42-turbine Letseng wind farm and has been approved by the Lesotho government. Lesotho’s first 25-35MW wind facility will be located near the diamond mine of Letseng La Terai in the highlands of Lesotho. PowerNET Developments (Pty) Ltd is a joint venture between South African energy consultancy NETGroup and Lesotho’s Powerdev Group.

The Lesotho Council of Non-Governmental Organisations (LCN) is an umbrella organization for NGOs in Lesotho. It was established in May 1990 with an objective of providing supportive services to the NGO Community. The Council implements this through networking and leadership training and development, information dissemination, capacity building, coordination, advocacy and representation when dealing with the government and the international community.

Among other goals the LAE seeks to foster and promote the art and science of Engineering and its application in Lesotho and to facilitate the exchange of information. For that matter, they will cooperate with educational institutions and public educational authorities for the furtherance of education and training in Engineering Science and Practice.

Lesotho Solar Energy Society (LeSES) acts as a platform for the industry and clean energy expert groups to exchange information and implementation of an industry code of practice.

Donor Activities in the Energy Sector [39]

Retrieved from "https://energypedia.info/index.php?title=Lesotho_Energy_Situation&oldid=272084"
Categories:
Hidden category:
Cookies help us deliver our services. By using our services, you agree to our use of cookies.