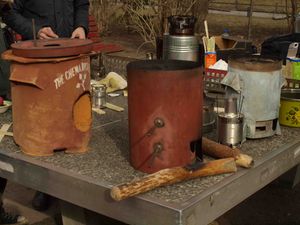 stoves convert dry biomass to wood gas and charcoal before the gas is burned. This gasification process needs heat and the absence of oxygen. The flame which offers sufficient heat for cooking is fed by the ascending wood gas and oxygen. This simple principle is used in a variety of contexts with different aims which mostly reflect local conditions.The aim was to discuss the impact of changes in the stove-design on the performance of the stove with special focus on type of substrate in use, efficiency, emissions, handling and other unexpectable side effects.The presentation included different models of microgasifiers and substrates which were presented by the participants in the room.

Asdescendants of the steam-engines, microgasifiers went through different stages with changing names, models and usage. Gasifiers of smaller size and weight conquered individuals lives throughmobility, cooking and agriculture. Woodgas drove millions of vehicles equipped with Imbert-generators during the 1930s and 40s in Europe. After propagation trough international cooperation since the 80s many households in Africa nowadays use microgasifiers as efficient cooking-stoves. Charcoal is a product of pyrolysis and stabilizes a highly fertile soil called Terra preta – an anthropogenic product rediscovered and reconstructed in recent years. Terra preta combines by-products of micro-gasifiers with recycling processes which form the basis of an ecological and social sustainable economy.

Characteristics of the products:

► Presentation: Lowtech Micro Gasifiers by Adelard Ndibalema & Andrea Berten
Tanzania faces a series of serious problems related to the heavy usage of fuel woods and charcoal in cooking, such as deforestation (especially in rural areas like Karagwe), health issues caused by indoor air pollution and great time consumption for its collection. “Micro-gasifiers” use organic wastes as fuel and have the potential to decrease the usage of fuel woods as well as the emissions, thus representing a possible solution for all these problems. This presentation described the development of a new type of microgasifier, a combination of TLUD and sawdust stove using sawdust (or in future coffee shells) and the testing methods which are being applied to prove the efficiency and the health improvements. This project is a cooperation project of Engineers Without Borders Germany/Berlin and CHEMA, an organization in Tanzania/Karagwe.

► Presentation: Sawdust - Microgasifier Stove
This work wants to increase the transparency of the thermo-chemical processes in a modified sawdust-microgasifier. The temperature distribution in the fixed bed and the gas composition of the combustion gas are measured and should illustrate more details about the different processes. Connected to this there can be a theoretical optimization of the stove design.
Defining the used biomass:

- Basically a stove can be controlled e.g. by adjusting the airflow. There is no possibility to adjust this at the sawdust at the moment; but you can close the surface and all holes to stop oxygen (primary and secondary airflow) getting inside and thus to stop the process running.

- No, because we want to be independent from electricity and the question of recycling of batteries. - Maybe it does make sense to test the difference in efficiency by using a mechanical fan.

- Due to the design with two layers, the outer part always remains much cooler then inside and remains handable.

- Open a workshop so that more people will have knowledge and experience to build and use the stoves. The dimension, design and other information will be published (as creative commons) so that people are informed. Also we want to be part of a development&production network for micro-gasifiers. Also Paul Anderson shared all the information about his stoves, e.g. Mwoto stove, to spread the idea of micro-gasifiers. The technology of micro-gasifiers is quite new. A lot of the knowledge sharing is based on creative commons and thus community-based. Commercialization only started recently within the last 10 or 15 years.

The creation of rotational flow is a common technique in combustion engineering to enhance the mixing of fuel and air and stabilize the flame. Micro-Gasifiers utilizing this technique are equally easy to build and possibly offer a more stable flame under a wider range of conditions. This talk explained the physics of fluid dynamics and how the design of the stoves affects the air flow, mixing and stability of the flame.

- The rotational air flow of the secondary air cools the outer tin, so it is even safer to handle than in other stove designs.

- Until now, only a few proof of concept stoves have been built, but they look promising and further research is due. 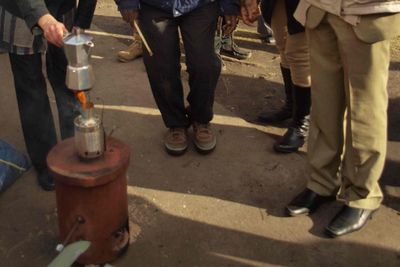 This article details the proceedings of the session "Micro-Gasifier" at the Micro Perspectives for Decentralized Energy Supply Conference - 2013 at University of Technology in Berlin with the following oral presentations:

Other Paper's submitted and accepted for the conference without oral presentation:

Retrieved from "https://energypedia.info/index.php?title=Micro_Gasifiers&oldid=190494"
Categories:
Cookies help us deliver our services. By using our services, you agree to our use of cookies.