Access to energy for poor households, especially in Africa and Asia, is one of the challenges in the 21st century. The question is which role can play Green Microfinance in this process? Many Microfinance Institutions (MFIs) are not aware about the importance of financing renewable energy (RE) / energy efficient (EE) products. A reason behind this might be the lack of knowledge about best practices and success stories.

Currently, the World Bank Group is engaged in hydropower projects in all its regions.


These efforts can be divided into four main points:

The World Banks investments in hydropower projects reflects international trends and demands. In the 1990 hydropower projects were strongly criticised throughout the world since social domains and investments in environmental protection were neglected and human rights have been infringed. Therefore lending in hydropower during the 1990s significantly decreased accompanied by a shift to projects with fewer environmental and social impacts.By the early 2000s, however, several policies re-positioned the World
Bank Group in terms of infrastructure and risk, and established a renewed framework for hydropower. 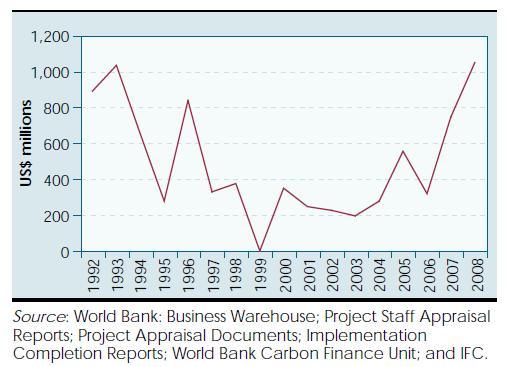 Since 2003 67 hydropower projects have been approved amounting to 3.7 billion USD in WBG contributions (US$3.2 billion for hydropower components) to support almost 9700 MW in project investments. 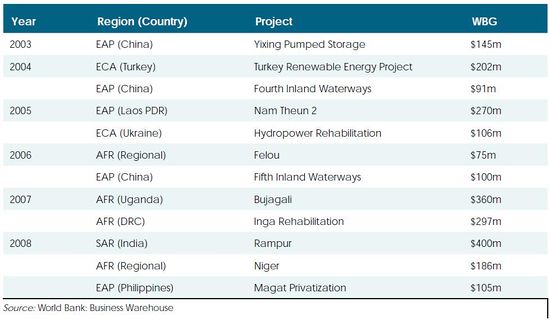 Over the time the WBG has adapted product lines and financial instruments. Over the period 1992–2002, the International Bank for Reconstruction and Development (IBRD) and the International Development Association (IDA) accounted for 99% of the lending portfolio, and International Financial Corporation (IFC) the remaining 1%. During 2003–08, IBRD/IDA’s lending decreased significantly,to 58%—mainly because of an absolute decrease in IBRD lending. At the same time, IFC increased support (to 20%), as did carbon finance (to 5%), and guarantees (to 17%), reflecting increased private sector involvement.

The WBG’s assistance extends beyond lending—to technical support, knowledge sharing, policy dialogue, economic and sector
work, and support during project preparation and implementation. In these roles, the WBG draws on a range of products and services which were developed after the fall of lending in the 1990s. These products in form of operational directives and safeguards, coupled with the ongoing development of tools such as Strategic Environmental Assessment and payments for environmental services offer the Bank opportunities to add inputs to hydropower efforts.

Source: Water Working Notes No 21, June 2009. Direction in Hydropower: Scaling Up for Development. Water Sector Board of the Sustainable Development Network of the World Bank Group

Detailed information about the total amount of KfW lending in hydropower projects in the last years could not be found in the literature. However, the Global Status Report of Renewables 2011 (REN21) stated that the KfW is one of the three leading development banks, in terms of financing of renewables projects in 2010 (with 1.5 billion USD).

► Information about small and large hydropower projects which are financed by the KfW can be found at the country portal at the KfW website: kfw.de

Countries where small and large hydropower projects have been / are supported are e.g.[1]:

The European Investment Bank is the EU's financing institution. Its shareholders are the 27 member states of the EU. In 2010, about 88% of total EIB financing of €72 billion ($99.5 billion) went to projects in the EU. Outside the EU, EIB is active in more than 150 countries.
EIBs lending for renewable energies grew almost five fold between 2007 and 2010. In 2008 lending account for 2.2 billion €, in 2009 lending were 4.2 billion € and in 2010 lending reached 6.2 billion €. However, the proportion of lending for small and large hydropower projects is unclear.

Some hydropower projects which are/have been financed are listed below[2][3]:

The IDB supports efforts by Latin America and the Caribbean countries to reduce poverty and inequality.In the hydroelectric sector, IDB supports the rehabilitation of facilities and helps to examine the social, financial and environmental sustainability of new dam projects.

In 2009 the IDB committed more than $1 billion in loans for renewable energy, including $941 million for hydropower.

Approved hydropower related projects funded by the ADB are e.g.:

Retrieved from "https://energypedia.info/index.php?title=Microfinance_Institutions_-_Financing_Renewable_Energy&oldid=99250"
Categories:
Cookies help us deliver our services. By using our services, you agree to our use of cookies.