In many countries, licencing of mini-grids still remain a hurdle for developers to scale up and reach economies of scale. The regulatory requirements are complex and time consuming and often is not clear which authority is responsible for which component. On average, licencing of a mini-grid site takes 26 weeks and for each new 100 kW site, the developers have to repeat the approval process. [1] In some countries, the developer have to even wait even longer and it is often not clear if and when will they receive their licence. For e.g., in 2021 in Senegal, out of five companies that have applied for a licence, only one got it, leaving the rest in limbo. In other countries such as the Democratic Republic of Congo, the level of bureaucracy varies from one region to another and this coupled with corruption rate makes the licensing process time-consuming, hindering the mini-grid deployment.[2]

Hence, strategies such as shortening of licensing period, simplified and clear regulatory framework for licencing and bulk licencing of mini-grids portfolios instead of individual licensing for each 100 KW project could greatly support the sector. [1]

Figure 1: Licencing period for different countries as of 2020 (based on AMDA's report where they interviewed 35 mini-grid developers).[1]

Publication: How do we licence it? 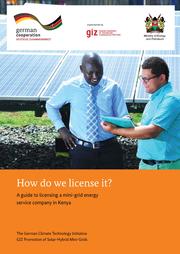 This guidebook has been compiled following the development of a pilot hybrid mini-grid project in Kenya. The project consists of a solar-hybrid generation plant of 50 kW, a low voltage (LV) power distribution network in Talek centre, Narok County and a prepaid metering system. While the project provides electricity to the surrounding community, it is also meant to act as a learning tool for all mini-grid stakeholders in Kenya, supporting the Government’s rural electrification efforts while helping to establish an effective solar hybrid mini-grid policy.
A private sector-driven approach was replicated through the creation of a Special Purpose Vehicle (SPV), the Talek Power Company, which is meant to be transferred to the Government of Kenya. The Talek Power Company had to go through all the steps of licensing as an energy service company.
This guidebook captures the lessons learnt from the Talek Power Company experience on the licensing process and acts as a tool to facilitate the licensing process for mini-grid project developers. Here you will find practical guidance on each of the steps of the licensing pathway.
In the annexes are sample documents utilised during the licensing process, provided for the purpose of illustration only. The use of these annexes and any adaptation must be done with the support of appropriate professionals.
The authors of this material do not bear any liability resulting from an improper use of the provided annexes.

This guidebook has been developed as part of a series of handbooks on mini-grids. You can check out the other ones in the following webpages:

A mini-grid is an integrated system for local electricity generation, transmission and distribution that can operate in isolation from the national electricity distribution network. Mini-grids can supply concentrated settlements, including domestic, business and institutional customers, with power at grid quality level. They typically utilise renewable energy (solar, wind, biomass) plus battery, diesel or hybrid fuel sources to produce power. Mini-grids are characterised by small capacities (MW), local geographical coverage, and low or medium distribution voltages, usually 415V to 11 kV.
There are currently over 20 public mini-grids owned by the Ministry of Energy and Petroleum (MoEP) serving remote towns and their immediate environs across Kenya. These are diesel powered with a few having been hybridised, using either solar PV (photovoltaic) or wind. Implemented by the Rural Electrification Authority (REA), they are operated under contract by the Kenya Power and Lighting Company (KPLC).
Several private-sector-owned mini-grids of varying sizes and sophistication are also in operation. These are typically below 50 kW and largely operate under the regulatory and licensing radar.
The following licences and/or permits are required to install and operate a mini-grid.

It should be noted that an integrated mini-utility operator can apply simultaneously for generation, distribution and supply licences . Also, prior to any construction or installation activity, the operator or project developer must have environmental clearance in the form of an environmental and social impact assessment (ESIA) licence issued by the National Environmental Management Authority (NEMA).
If the operator is a company, proof of registration is the Company Registry Form 12 (CR12). The licensed applicant and facility operator must be registered and domiciled in Kenya.

The template for this licence was prepared as part of an EUEI PDF project for the Regional Electricity Regulators’ Association of Southern Africa (RERA) to establish a framework for attracting increased investment in mini-grids employing renewable and hybrid generation in SADC.

The template for this licence was prepared as part of an EUEI PDF project for the Regional Electricity Regulators’ Association of Southern Africa (RERA) to establish a framework for attracting increased investment in mini-grids employing renewable and hybrid generation in SADC.

The German Climate and Technology Initiative GIZ ProSolar – Promotion of Solar-Hybrid Mini-Grids in Kenya. How do we license it? Nairobi. July 2015. Link: ProSolar Licensing Guidebook

Retrieved from "https://energypedia.info/index.php?title=Mini_Grid_Licensing&oldid=389053"
Categories:
Cookies help us deliver our services. By using our services, you agree to our use of cookies.