Mobile Service provider Safaricom projected that the mobile phone market in Kenya would reach three million subscribers by 2020. The price of the cheapest mobile phone in Kenya costs half the average monthly income. Using firm-level data from the World Bank Enterprise Surveys for Kenya, Tanzania, and Uganda, we find that a large percentage of firms had already adopted mobile phones in 2003, ranging from 83% to 93% across these countries. This high level of adoption appears to be correlated with the poor quality of landline services.

Kenyan firms reported an average of 36 days of interrupted landline service per year, with interruptions lasting an average of 37 hours. Many firms also faced challenges in even obtaining landline service. On average, Kenyan firms had to wait 100 days to obtain landline service, with a majority of firms paying bribes to facilitate this connection. (The average bribe was reported to be worth US$117, compared with a GDP per capita of US$780). Thus, explicit and implicit landline costs could have provided powerful incentives for firms to adopt mobile phones.


While Kenyan firms rapidly adopted mobile phones, the individual adoption rate has been signifificantly lower. Using data from the FinAccess surveys, we examine some basic patterns of individual mobile phone adoption in Kenya. Between 2006 and 2009, the percentage of the Kenyan population with mobile phone coverage remained relatively static, but the number of subscriptions tripled reaching 17 million by 2009 (GSMA data for 2009). The adoption of mobile phone handsets increased by 74% during this period, from 27% in 2006 to 47% in 2009, as shown in Table 1. 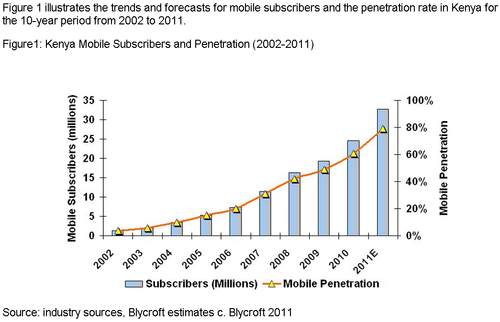 One-third of Kenyans shared their mobile phones with friends or relatives, supporting qualitative evidence of free riding and the use of mobile phones as a common property resource in sub-Saharan Africa. At the same time, such patterns could also reflect cost-sharing, especially among poorer rural households for whom the cost of handsets and services is still prohibitively expensive. For these reasons, reported data on mobile phone subscriptions could signifificantly underestimate the number of mobile phone users; in fact, while only 47% of individuals owned a phone, 80% reported having access to a mobile phone through direct ownership or sharing.

One of the most direct economic impacts of mobile phones in Africa is through job creation. With an increase in the number of mobile phone operators and greater mobile phone coverage, labor demand within these sectors has increased. For example, formal sector employment in the private transport and communications sector in Kenya rose by 130% between 2003 and 2007[1], suggesting that mobile phones have contributed to job creation.The mobile phone sector has also spawned a wide variety of business and entrepreneurship opportunities in the informal sector. While we would expect job creation in any new growth sector, many of these employment opportunities are directly related to the specifific business strategies of mobile phone companies in Africa. For example, because most Africans use prepaid phones (or “pay as you go”), mobile phone companies had to create extensive phone credit distributionnetworks in partnership with the formal and informal sector.Thus, small shops that have traditionally sold dietary staples and soap now sell mobile phone credit (airtime), particularly in small denominations. Young men and women are often found selling airtime cards in the streets. Numerous small-scale (and often informal) firms have also opened shops to sell, repair, and charge mobile phone handsets, either using car batteries or small generators. In the early years of mobile phone usage, entrepreneurial individuals started businesses to rent mobile phones, especially in rural areas.[2]

Retrieved from "https://energypedia.info/index.php?title=Mobile_Phone_Market_in_Kenya&oldid=99294"
Categories:
Cookies help us deliver our services. By using our services, you agree to our use of cookies.