The Indian manufacturing industry currently has an overall production capacity of about 1,300MW for modules and 700MW for cells. These capacities far exceed PV installations in India and will do so for some years, even considering the annual growth rates. The Indian PV industry has grown based on exports to international solar markets and continues to depend on the European countries for more than 80% of its revenues. More than 70% of cells and 80% of module manufactured in India are still exported[1]. How the recently announced Jawaharlal Nehru Solar Mission will change the PV Manufacturing in India. Will the domestic manufacturers will be able to match-up with the local demand. The answers to such questions are really important in understanding the future growth of PV in India.

In order to remain globally competitive in an increasingly tough market, Indian manufacturers will need to improve their offering by reducing their cost positions (through increasing scale and integrating along the value chain) and generating innovation. Currently, most module manufacturers in India are still dependent on foreign suppliers for ingots, wafers and cells. Maharishi Solar is currently the only Indian company with manufacturing facilities for ingots and wafers; it has a total capacity of 15MW. For the first batch of projects in the NSM, crystalline modules being used must be manufactured in India. The second batch of projects under the National Solar Mission(NSM) due to be allotted by the end of 2011 are not allowed to install modules with imported cells. Use of thin film technology is still exempted from domestic content guidelines. The state policies of Gujarat, Rajasthan and Karnataka do not have a domestic content requirement. Other states such as Tamil Nadu, Orissa and Andhra Pradesh are also expected to not mandate domestic content in projects[1].

The PV manufacturing industry in India has grown six-fold from under 200MW in 2007 to a 1,300MW in 201. In the next few years, the growth in module production will be replicated upstream as well. For the first time, Indian manufacturing industry could be seeing significant production capacities for wafers and ingots as well. The Module Production capacity is expected to reach 6 GW by 2020.

Complete integrated module manufacturing facilities of capacities as large as 600MW are currently being built by large Indian business conglomerates such as Lanco Solar and Birla Surya. Various smaller and new business entities such as AlfaSolar, JBM Group, Chemtrols Solar,Vorks Energy and Sonali Energies as new entrants in the PV industry arealso planning to build new facilities for production of modules.

A healthy domestic supply chain will bring down the cost of raw material for module production in India. As a result, the domestic ingot and wafer productions will be directly reciprocated into new domestic module manufacturing capacities. 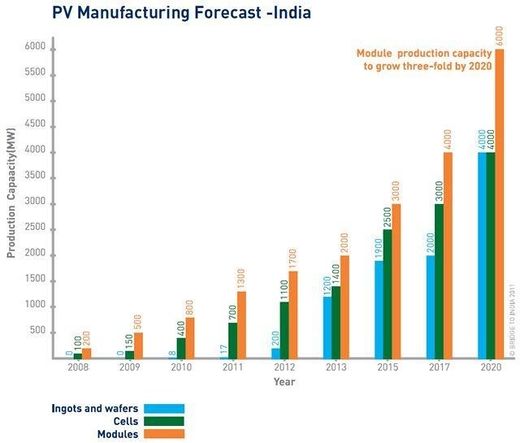