Due to their high viscosity, plant oils need to be burnt in pressure stoves. Pressure is induced in a tank through application of a pump. The liquid evaporates in a vaporizer and emits through a nozzle into a combustion area. The jet rebounds at a rebounding plate, mixes with ambient air and burns in a blue flame. The combustion area is surrounded by a flame holder. The power output can be adjusted with a valve regulating the fuel flow. For ignition, a small amount of ethanol is incinerated in a preheating dish beneath the vaporizer.[1] 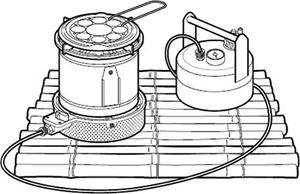 During the last decades, several projects have sought to design household appliances for cooking and heating that use plant oil. They mostly failed because of the following reasons:

For further advantages and disadvantages of plant oil as a fuel see also this article on energypedia.

Starting in 2004, the University Hohenheim (Germany), in cooperation with Bosch and Siemens Home Appliances Group (BSH), developed protos the plant oil cooker. The basic idea was to develop a cookstove that can use a variety of plant oils; even recycled and filtered oil previously used for frying. 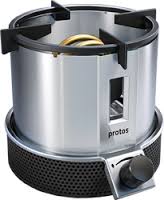 Field tests in the Philippines and in Tanzania showed that households and small enterprises such as restaurants that were previously cooking on 3-stone fires, can handle the Protos stove. People stated that they enjoyed the comfort of cooking and said it was like cooking on gas, even if LPG was not available. Based on observations from the field tests, BSH developed a 'second generation' of the Protos technology to increase efficiency, reducing noise, cleaning time and the cost of production.[2] The serial production was launched in May 2010 in Indonesia. Initial costs were considered to be around  US$40 - 42, at a production rate of around 25,000-50,000 units in 2010.[3]

However, in 2012, BSH decided to conclude the Protos plant oil cooker project and to discontinue series production of the stove in Indonesia. The main reasons were as follows:[4]

BSH has freed all patents associated with the plant oil cooker technology. Construction plans, introduction guidelines and other technical information is available at: http://www.bsh-group.com/index.php?127656

Retrieved from "https://energypedia.info/index.php?title=Plant_Oil_Cookers&oldid=255161"
Categories:
Cookies help us deliver our services. By using our services, you agree to our use of cookies.