REvivED water, a research and innovation project funded under the EU’s Horizon 2020 programme in the field of ‘low-energy solutions for drinking water’, brings together ten partners from six countries across Europe that contribute to overcoming the drinking water challenge by establishing electrodialysis (ED) as the new standard for water desalination.[1]

The balance between drinking water demand and water availability has reached a critical level in many regions of the world. Factors such as climate change are causing more frequent and severe droughts which exacerbate these adverse conditions. Low energy desalination solutions will be a crucial part of providing sufficient levels of good quality drinking water for a growing world population.

REvivED water is a European Union funded innovation project which aims to contribute to overcoming the drinking water challenge by establishing electrodialysis (ED) as the new standard for desalination of seawater. Safe, affordable and cost-competitive drinking water will be produced; with significantly reduced energy consumption compared to state-of-the-art Reverse Osmosis (RO) technology.


Focus is on the following systems and applications:

One of the aims of the REvivED water project is to develop a brackish water desalination system based on capacitive electrodialysis (CED)[2]. The project will combine innovative design and high performing components with appropriate pre- and post-treatment techniques to enable the development of a simple and robust stand-alone system. The use of solar energy for the system’s power needs allow its application in developing countries where high-quality drinking water will be supplied to local populations in rural areas without any alternative solutions.

First systems were installed in Somaliland, Tanzania and Djibouti in 2018 and 2019.

The systems are equipped with advanced monitoring systems, which allow a full evaluation and an objective comparison of the two different configurations. The collected data will be used as input for the overall evaluation, leading to future improved designs.[3] 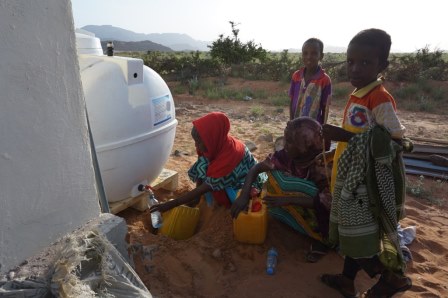 This project has received funding from the European Union’s Horizon 2020 research and innovation programme under Grant Agreement no. 685579. This output reflects the views only of the author(s), and the European Union cannot be held responsible for any use which may be made of the information contained therein.

Retrieved from "https://energypedia.info/index.php?title=Revived_Water&oldid=304576"
Categories:
Cookies help us deliver our services. By using our services, you agree to our use of cookies.