Since 2009, for the first time in history there have been more people living in urban areas than in rural ones. The United Nations calculate that by 2050 about 70 per cent of the world’s population will be living in cities. Urbanisation is increasing particularly quickly in newly industrialising and developing countries, with far-reaching consequences for the reciprocal relationships between rural and urban areas.[1]
The following articles explains the relations between cities and urbanisation and rural areas and the consequences on nutritional security and rural development.

The Pulling Power of the Cities

There is a steady growth in the exchange of information, capital, values, work, education and medical care between rural and urban areas. Many people spend several hours a day travelling to and from their place of work or education in the city. Some regularly spend several weeks or months in what are often better-paid jobs in the city. This need for mobility, which is often the result of economic forces, increases the demand for transport links between city and countryside.[1]

Investment in Rural Areas by Migrants 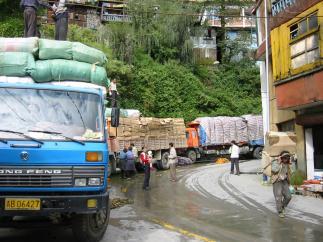 People who leave rural areas in order to earn money in the cities often invest at least some of their earnings in their home region –either by sending remittances or by transferring means of production (machinery and equipment) or consumer goods (such as electrical goods and household appliances). These investments are often the only way in which the rural area profits from innovation.[1]

Urbanisation also creates new challenges in connection with the transport of goods. As a result of the spread of cities and rapid population growth, the area of farmland available per person on the planet fell by 50 per cent between 1961 and 2005 (UN 2012). The consequence of less farmland being available, along with the growth and concentration of the population and the rise in the demand for food per person that is being seen everywhere, is that an ever more efficient transport infrastructure is needed to transport goods over ever greater distances in order to maintain the food supply.


The population of Dhaka, the capital of Bangladesh, is increasing at a rate of about 500,000 people per year, and the demand for rice alone is rising by about 80,000 tonnes per year. To supply the city’s new inhabitants with rice, an additional 4,000 lorry-loads of rice per year must be brought in from the rice-growing districts, most of which are several hundred kilometres away, putting additional pressure on the transport infrastructure.[1]

Many cities in developing and newly industrialising countries are now home to a relatively affluent middle class. This population group is pushing up the demand for highly perishable products, such as high-quality fruit and vegetables, and non-durable goods that are imported via sophisticated logistics chains from other regions with better infrastructure and better storage and packing facilities. There are often many reasons why supplies are not obtained from production in the surrounding countryside. Bulk buyers want to buy from large-scale producers in order to ensure that the required quantity is consistent in quality. As a result of transport costs, small-scale goods flows are usually more expensive than large deliveries. Frequently, too, the non-existent or very poor transport infrastructure makes it impossible for local producers to supply fresh produce to the urban markets or means that the goods that are supplied are of poor quality (see chart). The victims of this situation are both the local farmers, who find it very difficult to access attractive markets in growing cities, and consumers, who pay a premium for the more costly means of supply. Food that is transported over long distances instead of being supplied from surrounding areas is also disadvantageous from the perspective of the environment and climate change mitigation.[1] 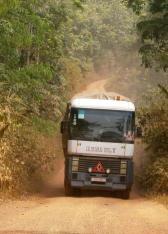 A lorry on the road near Keba, Sierra Leone: products from rural areas are often transported long distances to buyers in the city or even abroad. Photo: Alexander Czeh, 2013.

Development cooperation can help the participants in value chains to get to know and understand each other better; by working together they can adjust and balance their interests for the benefit of all. Producers can form production and marketing cooperatives and thereby become potential partners for bulk buyers. By keeping in close touch with each other, public and private-sector stakeholders can devise well-thought-out ways of promoting business and encourage saving and loan schemes; they can also promote the establishment of processing businesses in the rural hinterland of cities.

If efforts of this sort are to bear fruit, there must be targeted investment in infrastructure. Improving transport links between rural and urban areas is particularly important for creating attractive business opportunities in rural areas and ensuring a reliable and low-cost supply of goods to the cities. With these improvements the relationship between the city and its hinterland can be characterised by attractive prices for producers, lower losses of produce, higher trade volumes and lower prices for the end consumer. Shorter transport chains and journeys also result in reduced emissions and lower energy consumption. The strengthening of regional economic structures also reduces dependence on individual large suppliers and so contributes to the long-term security of the food supply.[1]

Further information on the transport of food:

Retrieved from "https://energypedia.info/index.php?title=Rural-Urban-Linkages&oldid=83196"
Categories:
Cookies help us deliver our services. By using our services, you agree to our use of cookies.