The project Shea Nut Butter Production aimed at applying and demonstrating different solar technologies for the improvement of traditional food processing processes. The project was located in Tiakane, in the South of Burkina Faso. It was part of the Solar Food Processing Project, an initiative of the International Solar Energy Society.

The initiative was running from 2006 to 2009 and consisted of three phases:
1) the establishment of a network and an internet platform to provide training and information,
2) the active support of projects with potential to transfer technology and know-how and
3) the development of an Solar Food Label as well as the evolvement of follow-up information material.

The Shea Nut Butter Production Project was one of the projects aimed at communicating know-how. It should ensure higher quality in food production and promote the use of solar technology. Specially trained local personnel should produce the technologies, because of that, technical trainings were included to the project. 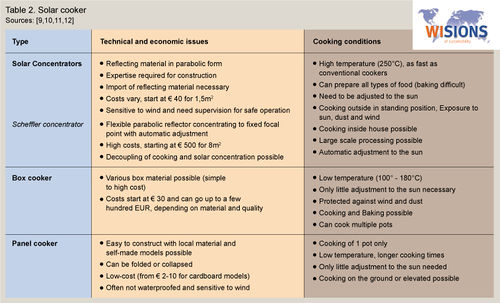 Parameters of different types of solar cookers, among them Scheffler concentrator as well as box cooker, © WISIONS

The Shea Nut Butter Project was implemented by the local partner Innovation en Solaire et Métallique ISOMET, who also constructed and installed the solar technologies until the end of 2007 in Tiakane, in the South of Burkina Faso. The target group for this project had been the local women.
The technical components consisted of two solar concentrators and 12 solar box cookers as well as a kitchen house.

Boiling and purifying the nuts could be done by using the solar concentrator. For the roasting, either the Scheffler concentraors or the solar box cookers could be used. For the drying, simple spreading of the nuts on the floor was sufficient and for the milling of the nuts, a diesel mill was used. Benefits of using the solar concentrators were clear: no smoke, soot or aromas were created that could have been affected the quality of the shea nut butter and its oil.

The results of the project were reviewed to be very promising. The end product shea nut butter possessed a significantly higher quality although it was difficult to guarantee this consistently. It was very important to involve and train the local women as they were key players. Overall, 300 kg of shea nut butter had been produced, 80% of them had been sold at the local market and 20% were shipped to Germany for test selling. There was the option to increase the production to 1000 kg.

Retrieved from "https://energypedia.info/index.php?title=Shea_Nut_Butter_Production_in_Burkina_Faso&oldid=322263"
Categories:
Cookies help us deliver our services. By using our services, you agree to our use of cookies.