This is part of a condensed report on the Small Hydropower Promotion Projct (SHPP). For an overview on the whole report please refer to following page: Nepal Report SHPP Report.

The implementation of the Small Hydropower Promotion Project (SHPP) started in the year 2000. After ten years of promoting small hydropower in Nepal, the project was phased out at the end of 2010.

Throughout the three phases of SHPP’s implementation the project’s objective was:

SHPP has thus continuously worked on the improvement of the small hydropower sector in Nepal, firstly focusing on subsectors of grid-interconnected small hydropower sites (below one MW as well as sites with a capacity of up to 10 MW). During the second and the third phases, SHPP also became engaged with small off-grid hydropower schemes by supporting the existing Alternative Energy Promotion Centre (AEPC), and conducting feasibility studies for off-grid schemes.

Background of the Project

Nepal has an enormous hydropower potential with a theoretical generation capacity of 83,000 MW of which approximately 42,000 MW is economically feasible. From a technical perspective, the hydrological and topographical conditions of the country including a high quantity of perennial rivers in combination with steep gradients provide almost ideal conditions for the development of hydropower projects. Even so, only a small fraction of this potential is currently being utilized. In 2009, the total generation capacity of hydropower plants in the country was only 635.6 MW. From these, 631.1 MW are connected to the national grid, and 4.5 MW is generated by off-grid mini and micro hydropower plants supplying electricity at local levels.

Since 2008 more than 1200 pico hydropower schemes (below 5 kW) have been built in Nepal. Approximately 720 schemes in the range of 5 kW to 1 MW were commissioned to produce off-grid electricity for rural communities. Around 100 companies are certified to working in operation and construction of mini and micro hydropower schemes.
According to the latest annual report of the NEA from 2009, hydropower accounts for 88.33% of the energy volume served through the grid. 29.57% (170 MW) of this derives from Independent Power Producers (IPPs). Only 0.29% of the energy derives from thermal plants, and 11.39% of the electricity was imported from India. The electricity demand exceeds the supply by far and it is rising by more than 10% per year. 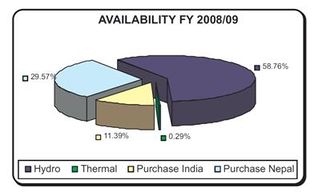 One major obstacle for electricity supply in Nepal derives from the fact that the whole system has almost no all year base load. All hydropower plants are run-of-river type schemes with no seasonal storage capacity meaning that in the dry season there is an increased energy deficit. In combination with inefficient transmissions and distribution causing up to 26% system losses, this resulted in up to 18 hours of load shedding per day (compared to 2 hours load shedding during the monsoon season) in 2008/2009.


Moreover, electricity supply is limited to 48% of the population most of which is in urban areas. The rural electrification rate is only around 8%. The low level of electrification as well as insufficient supply in the electrified areas hampers both economic development and access to information and education. Although the Nepalese government officially recognizes the importance of developing the electricity sector, and has passed a Hydropower Development Policy, the political instability of the country makes it difficult to develop and enact long-term strategies in general. To date, there is no National Energy Strategy for the country. A draft forwarded to the parliament cannot be approved as the parliament is incapacitated in its current situation. A draft of the Ordinance for the Development and Management of the Electricity Sector, to which SHPP contributed, has been pending in parliament since 2005. Up to now, the energy policy objectives which mainly emphasize the development of the hydropower sector are set up as a part of the general 5-Year Plans by the National Planning Commission. The current 3-Year Interim Plan (2007/08 – 2009/10) defining insufficient electricity supply as one of the most urgent problems of the country aims to produce significant increases of private sector participation in the hydropower sector as well as an extension of the NEA-generated capacity. The ambitious goal is to abandon the practice of load-shedding in 2013/14 by completing ongoing hydropower projects adding 105 MW generation capacity (85 MW by public sector, 20 MW by private sector) and the initiation of new hydropower projects with 2,115 MW capacity. However, knowing that hydropower projects in Nepal are usually delayed for a couple of years, these goals are very unlikely to be achieved. During the previous planning period, only 13% of the projected generation capacity increase was achieved.
To date, among the on-grid hydropower plants, 19 with a generation capacity of 158 MW are operated by IPPs. Six IPP projects are under construction and for 25 projects the Power Purchase Agreement (PPA) has already been signed. In total, there are around 170 projects developed and operated by IPPs in different stages, ranging from 1 to 50 MW with a total capacity of 1600 MW. Although it has to be assumed that only a part of them will be realized, these numbers indicate that the hydropower sector with the support of SHPP has indeed become an attractive area for investment during the last decade. According to the Nepal Association of Independent Power Producers (IPPAN), capital available for hydropower in the country’s bank sector is sufficient to finance hydropower plants with a combined capacity of 50 MW in total. Since a deficit of confidence and capital is one of its direct effects, political instability can be seen as a major bottleneck for further development of this sector.


- > For further information about the energy sector in Nepal click here.

Ideas for privately and commercially operated hydropower schemes in Nepal were first introduced with support from donor organizations in the early 1990s. At that time, Nepal was suffering from acute electricity shortages causing direct economic losses and leading to the migration of several industries to neighboring countries and resulting in a significant loss of jobs. The government of Nepal (GoN), being under great pressure to solve these problems, recognized the importance of the private sector for developing the hydropower potential of the country and adopted the legal framework accordingly. However, even though its regulations were among the most favorable to private investment in South Asia, the interest of the private sector to invest in hydropower remained limited for the next decade. At this time, there was only one international organization engaged in the hydropower sector in Nepal - the Swiss NGO Helvetas, who has been working in Nepal since the early 1980s. In 1992, the Norwegian Organisation NORAD supported the construction of a hydropower plant with a 60 MW capacity in Khimti. To finance the project, the company Himal Power Limited was founded as a joint venture with 60% Norwegian and 40% Nepalese shareholders. When it came into service in 2000, Khimti became the first commercially run hydropower scheme in Nepal. The second one was the 36 MW scheme at Bothekoshi, supported by USAID.
Simultaneously, in 1992, the German development cooperation became engaged in the hydropower sector with a small project aiming at the electrification of district centers in Nepal. During the 4-year project period GTZ developed a master plan for the electrification of approximately 40 district centers through small hydropower schemes and conducted site identification and feasibility studies. After project closure the need to further promote small hydropower in Nepal was identified. In response, GTZ screened 7 potential hydropower schemes and conducted a workshop with various stakeholders to indentify barriers hindering further development of the small hydropower sector.

Barriers for further development were therefore identified as the following:

The government of Nepal created an opportunity for private investment and ownership of generation facilities with the energy policy (Electricity Act, 2049), introduced in 1992. However, this regulation/policy did not immediately result in a large influx of investment in the small/mini hydro sector as was expected.

To overcome these barriers (cf. Ten years of Small Hydro Promotion Programme in Nepal), the Small Hydro-power Promotion Project (SHPP) started its work in early 2000. The interventions of the project focused on supporting different partners in the development of small hydropower electricity feeding into the national grid. SHPP thereby acted as a mediator between the parties, as well as an intermediary between license holders and potential investors. SHPP accompanied the process of the hydropower project’s development throughout the various stages of the ‘water to wire’ process in close interaction with relevant partners. The aim was to create confidence in the market for stakeholders involved in the small hydropower sector and thus bringing forward development of the sector. Technical assistance, training and capacity building were components of the project.

Lines of intervention were:

The assistance to project developers or independent power producers (IPPs) have focussed on technical assistance, tender documents preparation and promotion and lobbying work. The company Sanima, for example, has had significant preparatory assistance on 10 SHP projects since 2001. Apart from administrative support, the SHPP project assisted them in developing an innovative way of on-site penstock assembly.

In total, 104 projects, mostly between 1-4 MW were directly supported by SHPP. Additionally, SHPP reviewed 300 feasibility studies of micro hydro projects for the AEPC. In 2009/10, SHPP conducted capacity building measures within AEPC with the aim of enabling AEPC to take over some of the services offered by SHPP after project closure.
Given the state of the sector in the early 90s and the following development of the SHP sector, IPPs have really taken off in Nepal. If we see the current project pipeline and the fact that electricity generated by IPPs adds up to 35% of grid power in Nepal, this can be an inspiration for comparable emerging countries. The activities of SHPP and others on different levels in the sector have been crucial and offer valuable experience. 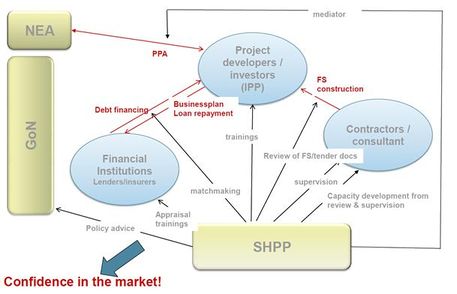 Piluwa is an independent power producer (IPP) project with a capacity of 3 MW, which was supported and supervised by SHPP from ‘water to wire’. After completing the first stages of the project, a financing institution had to be found, but the banks hesitated to step in. Lacking capacity and experience in hydropower, the risk was too high for them. Finally, in 2004, 7 banks formed a consortium to finance the project and thereby share the risk of a project failure. SHPP continued to mediate between investors and banks and gave technical advice in all following stages of the project. The construction site was reviewed on a regular basis and all occurring problems were solved by SHPP’s experts.
In the end, the Piluwa project became a big success, making it an excellent example in the developing sector. By supporting this project to become a success story, SHPP created a sense of confidence for the banks demonstrating that Small Hydropower projects can be a safe and profitable investment.