Many small, rural villages and towns are off grid, with limited or no access to reliable sources of electricity. Agro-processing is a productive end use of electricity for which a large gap currently exists. These small villages typically do not have access to a diesel mill for crop processing, and must rely on manual processing, or travel long distances to use a mill.[1]

VIA plans to install solar mills in villages in Indonesia, Papua New Guinea, Philippines, and Vanuatu. These mills will deliver services to up to 10,000 households. Small mills will be installed, with an appropriate capacity for the village, through a microfinancing program. The mills will be used to process staple crops, such as rice, corn, and cassava, that require processing before eating, and make up the majority of the diet of rural villagers.[1]

Use of solar mills will increase productivity for rural, while the  processing required. The time saved in manual labor can be redirected to other efforts that will increase income, particularly for women who are the primary source of labor for agro-processing. Cost savings will be realized in the reduced consumption of diesel fuel, and reduced time spent traveling to mills in remote villages.[1] 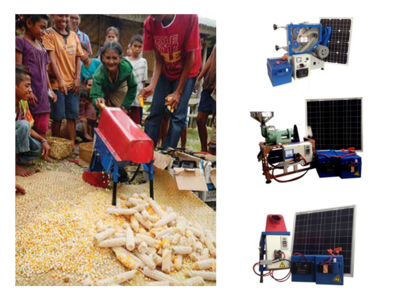 Village Infrastructure Angels (VIA) was incorporated in 2012 with the mission to make poverty-alleviating infrastructure affordable to everyone through long-term loans.[1]

From a target of 200-500 solar mills, VIA and its main partner, Project Support Services, have delivered over 230 solar mills to market to date, including 150 as cash sales and 80 on 3-5 year lease agreements, with additional units being ordered. From a target of $3 million of investment to be mobilized over the award period, VIA has secured over $2,000,000 and has at least $1 million more under negotiation. As a result of funding received from Powering Agriculture, VIA’s partner has spun off a company focused on a solar-powered agro-processing equipment, Agsol, which was accepted, together with another VIA supplier of Internet-of-Things (IoT) sensors, to a prestigious technology accelerator run by CSIRO. VIA has also deployed 2,000 households of pay-as-you-go lighting kits alongside the solar mills, the first and largest deployment of PAYG solar in the Pacific region. VIA provides seven kinds of solar mills, each suited to a specific task such as a rice huller, corn sheller, flour grinder, or coconut/cassava grater. All seven solar mills have been warmly received by communities, but the cassava grater most of all, as it not only reduce hours of manual processing for women, but apparently has improved the taste of the national dishes, laplap, tuluk and simboro.[1]

Retrieved from "https://energypedia.info/index.php?title=Solar_Agro-Processing_Power_Stations&oldid=285061"
Categories:
Cookies help us deliver our services. By using our services, you agree to our use of cookies.