Worldwide, solar energy has an enormous theoretical potential for power supply. However, technology and generation costs of solar are higher than those of the conventional energy sources. The worldwide market for solar energy applications and the installed capacity are growing. The Vietnamese market is currently very small, but PV power is foreseen  to make a contribution to Vietnam's power supply already in 2020 (revision of the PDP).


A general overview about Viet Nam's energy situation is given: Vietnam Energy Situation.

In general, Viet Nam can be considered as a country with high solar energy potential. The solar resources are comparable to countries like Italy, Spain, and California or – staying in the region – China or Thailand. According to a recent mapping project by a Spanish research consortium estimations of overall solar resources in Viet Nam show an average GHI of 4-5 kWh/m2/day in most regions of southern, central and partially even northern Viet Nam (corresponding to 1,460-1,825 Wh/m2/year) and peak irradiation levels of up to 5.5 kWh/m2/day on average in some southern regions (corresponding to about 2,000 kWh/m2/year).[1] 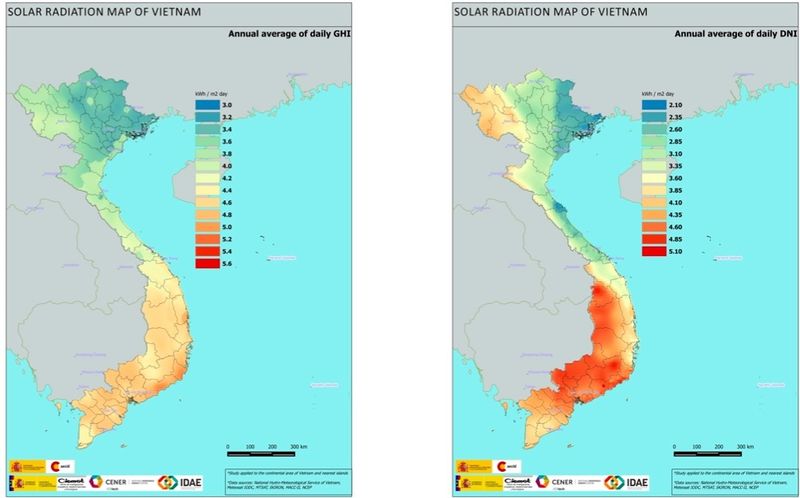 The most up-to-date and scientifically comprehensive estimation of solar resources in Viet Nam was undertaken by a Spanish research consortium led by the Spanish Research Centre for Energy, Environment and Technology, CIEMAT, with support of the Spanish government and in collaboration with the Vietnamese Ministry of Industry and Trade. As a result of these efforts very detailed maps of solar resources in Viet Nam are now available for policy makers, investors and researchers.[1]The processed data will most likely be published by MoIT in 2015.

Since there is no publicly accessible database on solar PV projects, available information on existing projects are based on individual private or institutional monitoring efforts. The most comprehensive overview has been published by Mr.Thrinh Quang Dung, former director of the Solar Laboratory of the Institute of Physics in Ho Chi Minh City (Solarlab) under the Vietnamese Academy of Science and Technology (VAST). The project overview below (Solar Projects in Viet Nam) is primarly based on his publications.[2] ►Go to Top

The Vietnamese solar PV market is currently very small with only around 4.5 MWp installed capacity at the end of 2014. Around 80% of that capacity was deployed off- and 20% on-grid. For off-grid uses, applications can be divided into two main categories. First, there are small-scale applications for domestic (lighting, home appliances etc.) or non-domestic (telecommunication, BTU etc.) uses. On the other hand, there are larger PV off-grid systems that either include additional infrastructure for local power distribution or management (mini-grids) or additional sources of power such as diesel generators or wind turbines (hybrid systems). The former can be subdivided into Pico PV applications such as solar lanterns or solar battery chargers, Solar Home Systems (SHS) for mostly domestic appliances and larger stand-alone PV systems for mostly institutional uses such as community or medical centers. Power capacities of these systems range from less than 1 Wp for Pico PV applications to 1 kWp and more for larger stand-alone systems. Regarding larger-scale off-grid applications there are different technologies and system configurations in operation including stand-alone off-grid PV systems, hybrid systems (PV with diesel, wind and/or batteries) and PV mini-grids with a substantial part of grid infrastructure included.


Grid-connected systems are primarily based on crystalline-cell module types of different sizes. They can be clustered in residential PV rooftop units (approx. 1-50 kWp), commercial/industrial PV rooftop units (>40kWp) and ground-mounted PV systems. Almost all grid-connected systems have been solely installed for demonstration or piloting purposes.


Following the available data, roughly 60-70% of the off-grid installed capacity in Viet Nam is dominated by smaller applications such as Solar Home Systems (SHS), small base transceiver stations for telecommunications (BTS), solar public lighting systems and likewise applications. Around 30-40% of off-grid installations are bigger systems such as solar local network stations and off-grid hybrid systems in remote areas or on islands.
►Go to Top

Currently there are no solar PV development targets implemented within the relevant energy strategies such as the Master Plan for Power Development. The PDP VII from 2011 is currently under revision and expected to be finalized and published until mid of 2015. A first draft became public end of October 2014 showing raised targets for renewable energies in general and, for the first time, a specific target for solar PV.


Policy Framework for PV On-Grid Applications
Currently, there has not been any specific regulation for solar PV implemented so far. This applies in particular to the following aspects of the regulatory energy framework:

The prospects of further PV off-grid development in Viet Nam are mainly framed by the national electrification strategy and related political targets and measures. This strategy has its main foundation in the Power Development Plan (PDP), which indicates the strategy to develop and create rural power until 2020. Here government stimulates EVN to develop the national power grid to supply power to 100% households by 2020.

The second rural electrification project (REPII) is providing funds for this process. The objective of the REPII, which became effective in 2005, is to improve access to good, affordable electricity services to rural communities in an efficient and sustainable manner, financed with a US$200 million IDA credit and US$5.25 million GEF grant, the project included a major upgrading and expansion of rural power networks in about 1,200 communes, the conversion of the existing ad hoc local electricity management systems to the local distribution utilities (LDUs) as legal entities recognized under Vietnamese law, to improve management of power distribution in rural areas and capacity building assistance for LDUs, provincial authorities, participating regional PCs, and national authorities involved in the planning and regulation of rural electrification. Additional financing for the Second Rural Electrification Project (US$200 million IDA credit) was approved in May 2009 and is supposed to increase the outcome to 1,500 communes with 1.5 million households.[5]
►Go to Top


There are also a number of larger-scale PV off-grid systems in operation, including hybrid systems (PV-wind, PV-diesel, PV-wind-diesel) that often include grid and grid management infrastructure as well (mini grids). There is for example one project in Bai Huong village on Cu Lao Cham island (28 kWp PV plus 20 kW diesel generator) and one in Mang Yang in central highland Gia Lai province with 100 kWp PV combined with a 24 kWp mini hydro plant. Further projects, including PV-wind hybrid systems, are in development on several islands. In addition to these hybrid systems installed in the rural areas of Viet Nam’s mountain regions, there have been more than 50 PV hybrid projects realized on islands and naval outposts. All of these projects were put into operation together with EVN and the Vietnamese Navy as the main investors and off-takers for the energy provided by the systems.

The grid-connected share of installed capacity is dominated by a rather small number of bigger roof-top systems such as the installations of Intel Corporation (220 kWp), Big C (200 kWp), the National Conference Hall in Hanoi (154 kWp), the UNDP building in Hanoi (119 kWp) or the new National Assembly in Hanoi (50 kWp). So far, there are no larger ground-mounted PV systems in operation yet. However, there have been some announcements for investments in utility size PV power plants very recently. Following media reports from January 2015, a 30 MWp PV plant with an investment volume of 60 million USD is under development and planned to be grid-connected in Quang Ngai province by end of this year. Another announcement relates to a planned 100 MWp PV plant in central Viet Nams Quang Nam province. Following media reports from March 2015, a Russian energy company with Singaporean and Vietnamese investment partners is planning to invest 140 million USD but negotiations with EVN about “market prices” are still ongoing.