Solar Pumps for Irrigation- The Success of EnDev Approach in Ghana

Energising Development (EnDev) is an energy access partnership programme currently financed by six donor countries – the Netherlands, Germany, Norway, the United Kingdom, Switzerland and Sweden. The Deutsche Gesellschaft für Internationale Zusammenarbeit (GIZ) GmbH acts as lead agency for the implementation of the programme and cooperates closely with the Netherlands Enterprise Agency (RVO) on the global level as well as other implementation partners on the country level. EnDev promotes sustainable access to modern energy services that meet the needs of the poor – long lasting, affordable, and appreciated by users.

In Ghana, a key component of the project is supporting small scale farmers to access and use solar PV pumps for irrigation purposes through market incentives and capacity development for solar companies and farmers. The market development approach was used to link suppliers of PV pumps to the farmers.


The main objective of this intervention is to provide energy for irrigation for all year round farming. The target group was private small scale farmers practicing informal irrigation and willing to invest in PV pumps, mainly to substitute manual practices but potentially to substitute petrol or electrical pumps too.

The Project had no regional focus in Ghana but responded to the demand for PV pumps by farmers. The project built upon a private sector development approach. It provided incentives to facilitate the market introduction of PV-pumps for small-scale irrigation through private initiative of Renewable Energy system integrators, pump-suppliers and suppliers of agricultural equipment who identified customers for their systems.

Potential beneficiaries were mobilised through the equipment providers. Private farmers involved in informal irrigation and willing to invest 60 - 70% of the total investment were considered. The project subsidised between 30 -40% of the cost of the Solar pumping system including installation and maintenance. 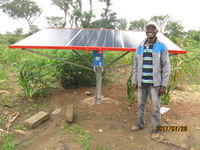 Nabio is a suburb near Navrongo in the Upper East Region of Ghana. The area is located in the tropical savannah zone of the country with monthly mean average temperature above 200C . Due to high temperatures, the area is mostly dry and access to water for irrigation and other activities is a great challenge. Moreover, the main occupation of the inhabitants of Nabio is vegetable farming and lack of water implies they rely heavily on rainfall to cultivate their lands. Through the Energising Development Project, a 1000W solar pumping system was installed for a farming community in the vicinity. Although the system is relatively small compared to the land available for cultivation, it has revived the fortunes of the whole community. With the assistance of flexible irrigation tubes, the solar pumping system irrigates 10 acres farmland used for cultivating Pepper, Okro, Tomatoes and Garden eggs. The famers have formed an association called Nabio Gani Farmers Association which consists of 50 women and 10 men. The leader of the association, Roland Puuyeridam was highly excited on the relive the system has brought to them enabling them to cultivate all year round. More so, he stated that, the over reliance on a shallow well by the community which dries out during the dry season is a thing of the past. In order to keep the system operational, every farmer pays GHS 30($ 7) as a levy at the end of each farming season to assist in the maintenance of the system. It is interesting to note that, the solar pumping system provides drinking water for 350 people in the community. Initially, the community was dependent on a shallow well as a source of drinking water which usually dries off in the dry season. In effect the solar pumping system has been of great help to the community where now there is abundant water for irrigating vegetables , access to portable drinking water for the indigenes and animals such as donkeys, cows and dogs 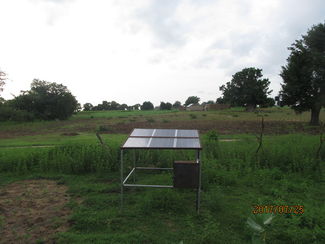