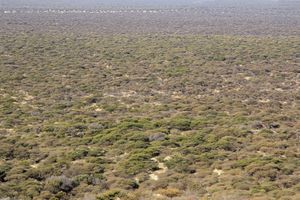 Bush encroachment in Namibia is defined as the densification and rapid spread of native bush and shrub species, resulting in an imbalance of biodiversity.. It is considered a serious ecological and economic problem in Namibia and affects approximately 260,000 to 300,000 km2 of land in 9 of the country's 14 regions. Additionally, invasion of exotic tree or shrub species such as Prosopis also pose a threat.

Bush thinning, the selective removal of woody plants, will result in increase in grass production (resulting in increase in grazing capacity). Bushes and shrubs can be a source of energy for households (firewood, charcoal), industry (industrial boilers and electricity generation) and the national electricity (biomass power plants).[1]

This bush encroachment phenomenon is said to be caused by a number of interlinked and potentially compounding factors: including overgrazing caused by historically high stocking rates; preference of grazing livestock over browsers; increased atmospheric CO2 levels, which favour growth of bush over grasses; suppression of regular high-intensity fires; prolonged drought periods followed by high rainfall years; fewer periods of frost; and perhaps other factors that have not yet been fully understood. However, one thing is certain, if we do not actively control bush encroachment in Namibia, it will soon become an insurmountable economic, social and environmental problem. 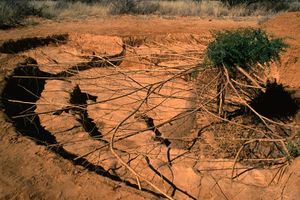 Illustration of an extensive network of roots of an Acacia mellifera explains how bush encroachment can dominate groundwater resources, caption by Prof Nico Smit

Bush encroachment seems to be the silent killer of our agricultural and associated sectors, thereby substantially suppressing our economy. It is slowly suffocating our productive lands, sucking our soils dry and driving out our ecological diversity. If business as usual continues, all of Namibia’s most productive lands will be blanketed in bush, hindering our very important socio-economic contributors, like the beef and small stock production industries, our tourism industry, our game farming and hunting industries, to name but a few.

The current level of bush encroachment is causing substantial agricultural productivity losses through the drastic reduction of stocking rates. This productivity loss alone is estimated to be costing the local economy approximately N$ 2 billion per year. These losses will undoubtedly continue to increase, in line with the spread and worsening of the bush encroachment problem. It is now common place for once productive land to be so densely bush encroached that the movement of animals, livestock and wildlife alike, is impaired.

Groundwater recharge is also significantly affected by bush encroachment.  A single 2.5 meter tall Senegalia mellifiera (Black Thorn or Swarthaak) bush is estimated to draw up over 60 litres from the ground into the air each day through evapotranspiration. And given the fact that an average bush encroached hectare of land can host over 2 000 bushes of various height classes, loss of soil moisture into the atmosphere is significant. This, in turn, also reduces the available soil moisture for grass growth and for the replenishment of the groundwater systems. Over large areas of bush encroached land, billions of cubic meters of water are thus lost each year due to the bush encroachment problem.  The recent drought begs the question, can Namibia spare such a loss of water?


Numerous other sectors are negatively affected by bush encroachment. Consumptive tourism, such as hunting, and non-consumptive tourism, such as wildlife viewing, are both impacted, as the density of wildlife in bush encroached areas is greatly reduced. This affects the level of tourist satisfaction, which may in turn have negative impacts on the future of our tourism industry, an industry intrinsically linked to Namibia’s wildlife and scenic beauty.  Game farming is equally affected by bush encroachment through reduced stocking rates, and thus reduced offtake capacities. 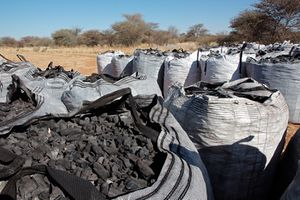 Arboricides (chemical substances that kill woody plants) have been widely used in Namibia for decades to combat bush encroachment, indicating that the problem has been largely acknowledged. Nevertheless, the idea of utilising the woody biomass is a relatively new concept and bears tremendous socio-economic and ecological opportunity. The charcoal industry is the most developed biomass sector in the country, but it has not always focussed on the use of encroacher bush as its primary feedstock. However, more recently, charcoal production is being used as a means of bush control and it has been successful in that it provides cost recovery for the bush harvesting efforts, which the use of arboricides simply cannot. Nonetheless, not all of Namibia’s biomass can be converted into charcoal, and therefore new ways of commercialising our biomass resource should be pursued. One thing is clear, the enormous potential value that could be unleashed from Namibia’s encroacher bush biomass is a game changer, including but not limited to the potential for additional taxation revenues of an estimated N$ 750 million annually.

The lowest hanging fruit is energy, be it thermal or power. Encroacher bush as a feedstock for thermal energy generation is already gaining traction in Namibia. The Ohorongo Cement plant near Otavi has proven that its thermal energy requirements can be covered almost entirely on encroacher bush wood chips, opening up a market of approximately 80 000 tonnes of wood chips per annum. However, while this market is worth an approximate N$ 65 million per year in wood chips, it is still going largely unmet. The Namibia Breweries have also recently switched over to a biomass fuelled boiler, which converts roughly 7 500 tonnes of encroacher bush wood chips per annum into thermal energy for the operations at the Windhoek plant. Both of the above markets are substituting fossil fuels for wood chips, shifting from imported, unsustainable fuels to locally sourced, renewable ones, as well as ensuring that the encroachment problem is being addressed in the process. Other benefits from fossil fuel substitution include foreign exchange savings, and additional job creation. However, the above capacities equate to but a minute fraction of the potential that Namibia’s encroacher bush biomass holds.

Conversion of The biomass resource into electrical power is the next step and is one that is currently being investigated, both publically and privately. It has already been determined that, in principle, the establishment of a biomass fuelled power plant of up to 20 Megawatt (MW) scale would be both technically feasible and economically viable. Not only would such a power plant be able to generate renewable energy, but it would also be able to provide base-load power, something that wind and solar PV cannot. A single 20 MW biomass power plant would require approximately 180 000 tonnes of wood chips per year, equitable to roughly 18 000 hectares’ worth of bush encroached land.  And while considered a fairly large undertaking in itself, Namibia would require another 70 of these power plants just in order to meet and mitigate the annual increase in bush encroachment. Theoretically, Namibia’s total current encroacher bush biomass resource would be able to provide us with 1 400 MW for the next 30 years (or more realistically, 200 MW over the next 220 years). This completely ignores the fact that the encroacher bush would typically regrow at an average rate of about 1.8 % per year after initial harvesting. 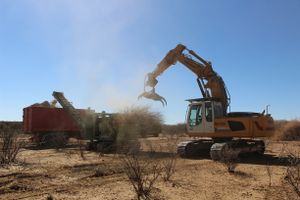 The potential biomass industry would not only help to secure the existing 200 000 jobs within the agricultural sector through the restoration of Namibia’s rangelands, but it would also directly act to create its own sector-specific jobs. These jobs would be most similar to the mining sector, whereby skills would be paramount and would, on average, offer far better income than jobs in the agricultural sector. Furthermore, primary harvesting and production of the biomass would lead to new value chains being developed, such as thermal and chemical processing, biofuels, construction materials, services and research & development, yielding even more socio-economic benefits. And while it is difficult to project exactly how many new jobs would be created if the biomass industry were to receive its due attention and investment, utilising the vast wood-based biomass resource essentially equates it to an extractive industry.  Thus, it would be safe to say that the biomass industry could align itself to other primary extractive, or resource-based industries, such as fishing or mining in the next 10-20 years. The sooner we harness this opportunity lying at our doorsteps, the better we can achieve our national goals, such as the Harambee Prosperity Plan and Vision 2030.

In light of the above challenges and opportunities, the Namibia Biomass Industry Group (N-BiG) was formed through cooperation between the private sector founding members and the MAWF - GIZ Support to De-bushing Project, running from 2013 to 2017. N-BiG is positioning itself in becoming the leading biomass information hub and industry association, built on a public-private and academic sector cooperation in Namibia. It aims to support and facilitate growth within this young biomass industry to facilitate the restoration of Namibia’s rangelands, recover the costs of bush control, and commercialise and exploit the largely untapped encroacher bush biomass resource.

N-BiG membership provides access to relevant information and services is open to all.

Retrieved from "https://energypedia.info/index.php?title=Solid_Biomass_Energy_in_Namibia&oldid=303557"
Categories:
Cookies help us deliver our services. By using our services, you agree to our use of cookies.