Strategic Study on the Energy Mix for Electricity Generation in Tunisia

In view of an increasing demand of and a simultaneous decline in national fossil energy resources with heavy dependence on fossil fuels, the energy balance of Tunisia has shown an import surplus since about the year 2000. This deficit makes Tunisia's economy increasingly vulnerable to rising international energy prices.

The subject of this study is the Tunisian electricity sector. Currently, the demand for electricity increases by around 4% per year; in 2008 it accounted for a 20%-share of the domestic demand for final energy In continuation of this trend, an increase in electricity demand up to 32 TWh is expected until 2030.
This development would require considerable investments in the development of today's power plants. It is so far composed of mainly conventional gas turbines, steam turbines and combined cycle power plants. By contrast, generating electricity from renewable energy has so far been limited; the actions of the Tunisian solar plan and existing plans for expansion, however, point to an increasing importance in the future.

The main focus of this studies lies in:

The aim of the study is to define robust strategies for the future energy mix of sustainable, affordable and secure electricity production in Tunisia by 2030. The analysis is conducted in cooperation with ANME (Agence Nationale pour la Maitrise de l'Energie). 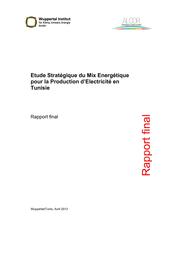