Suriname is bordered by French Guiana to the east, Guyana to the west, Brazil to the south & the Atlantic Ocean to the north[1][2]. The region in the north is mostly lowland coastal area, where most of the land has been cultivated, while the southern part consists of tropical rainforest and randomly distributed inhabited savanna along the county’s borders with Brazil[1]. 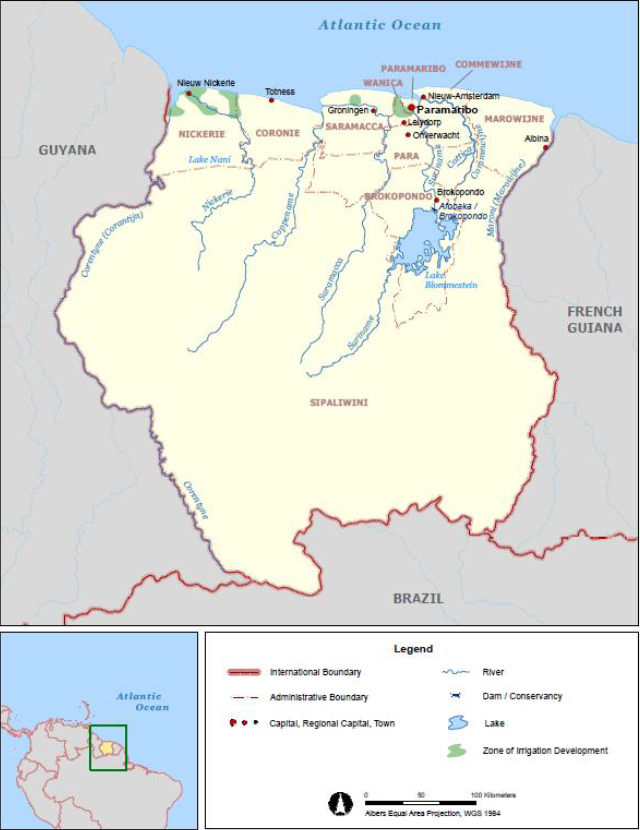 The country’s climate is mostly hot and humid through the year; equatorial in coastal areas, tropical monsoon further inland and tropical savannah in the south-western portions of the country[1]. Suriname has two wet seasons; the 1st and the main one is from April to July, and the 2nd and shorter one is in the period December-January[1]. The northern populated area has four different seasons: a minor rainy season from early December to early February, a minor dry season from early February to late April, a major rainy season from late April to mid-August and a major dry season from mid-August to early December [2].

Suriname has a variety of natural resources, but the national economy is dominated by certain mining activities and agricultural products [1][3][4]. The primary mining products are: oil, bauxite and gold, while in the agriculture sector, rice and bananas are the dominant products[1][3][4]. Suriname is highly energy-independent due to the combination of the mining of fossil fuels and the significant wealth of hydropower, thus, energy-wise, it is a very self-sufficient country[3].

After Trinidad & Tobago, and Cuba, Suriname comes in as the 3rd largest oil producer in the Caribbean[3].

According to REEEP (2013), Suriname has small amounts of fossil fuels reserves, which are mostly exploited by the government-owned company ‘Staatsoli’. The country has a refinery, which has a production capacity of about 7,500 barrels/day[5]. With regard to these numbers, it is comprehendible that, amongst the Caribbean countries, Suriname is the least reliant on fossil fuels for electricity generation[5].

The most significant energy source in the country is considered to be hydro-electricity, which was used in 2010 to supply 95% of its electricity generation[5]. Notably, around 26% of Suriname’s total energy supply is generated through Lake Brokopondo’s hydropower system[5].

A study that was carried out in 2014 has analyzed the Suriname’s energy matrix as indicated in the following figures. 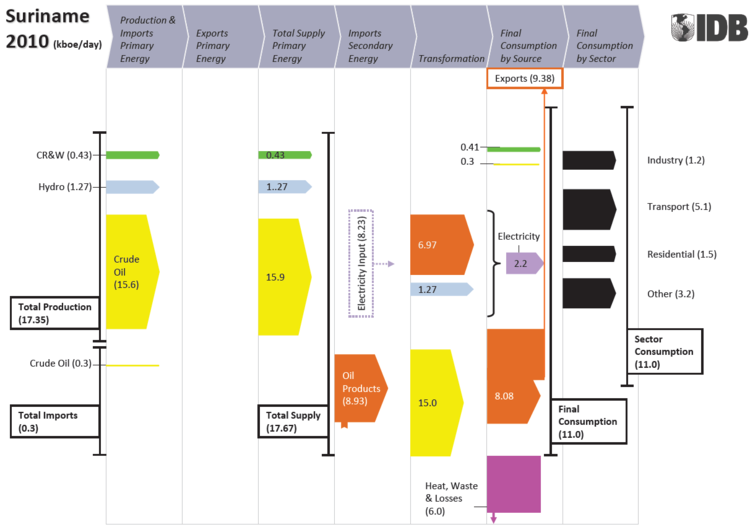 According to this analysis[3]: 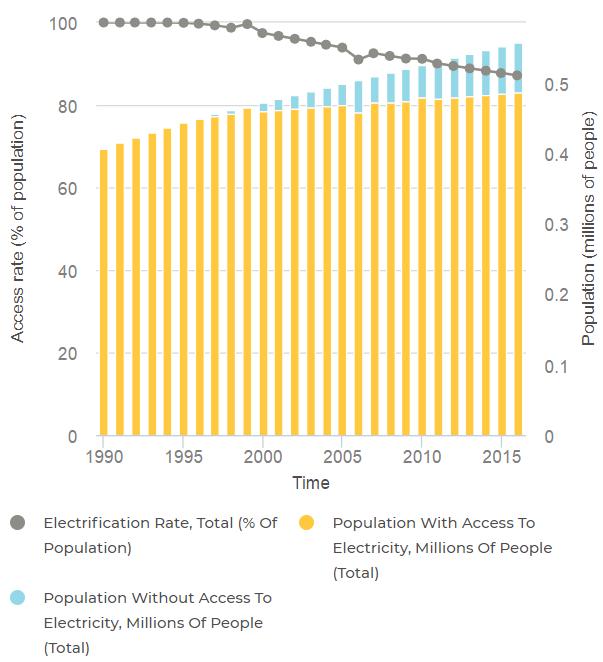 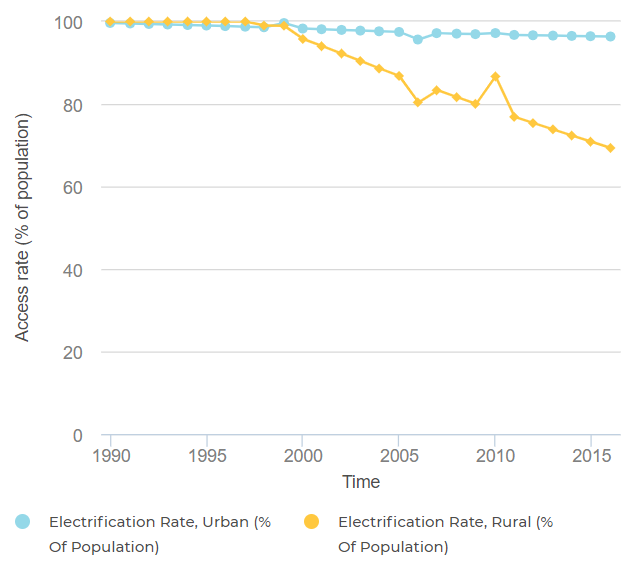 As shown in the last two graphs, the electrification rate in the country has been going down through the 2000s, which requires more attention for the country's energy supply and demand. 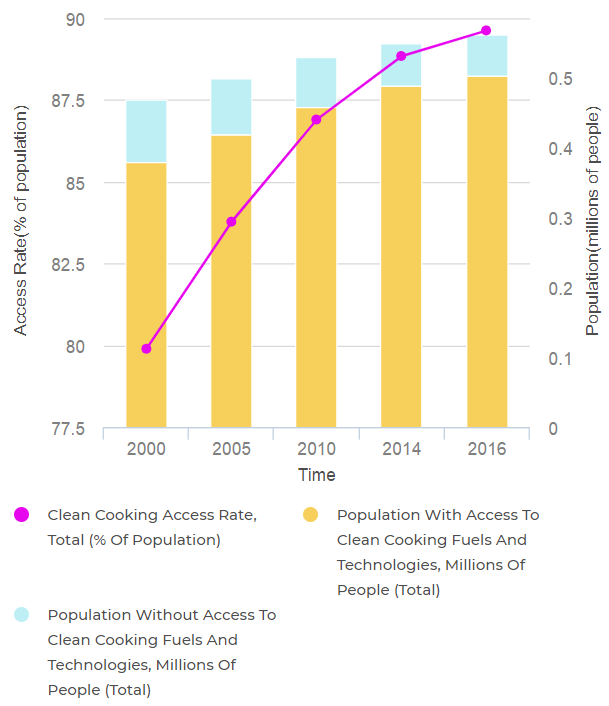 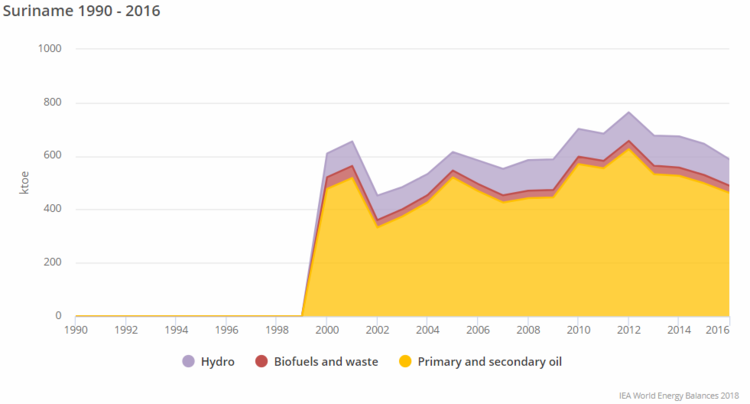 In 2010, Suriname’s total installed electricity capacity was 355MW, which were distributed as follows: 15MW from Staatsoile, 78MW from Suralco, 82 MW from EBS and 180MW from hydropower[5]. 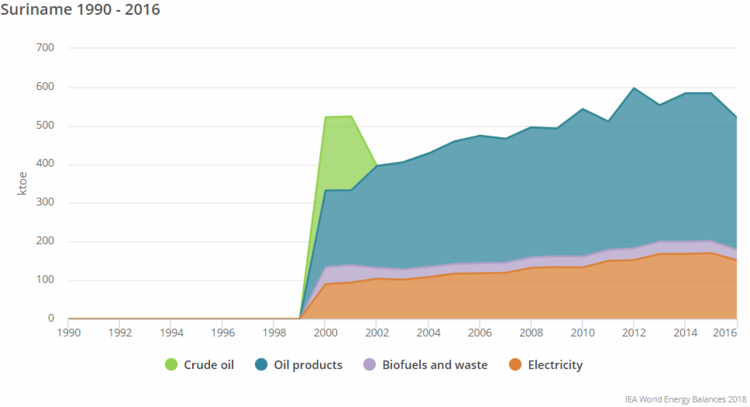 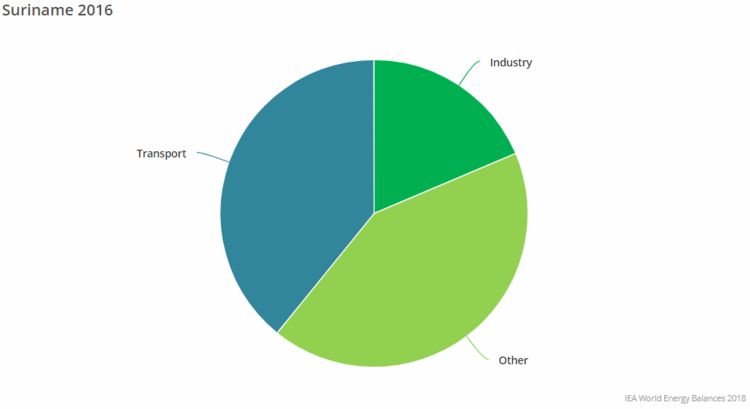 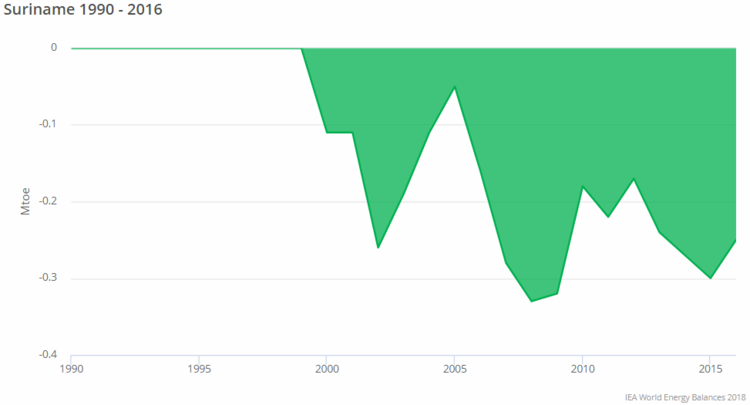 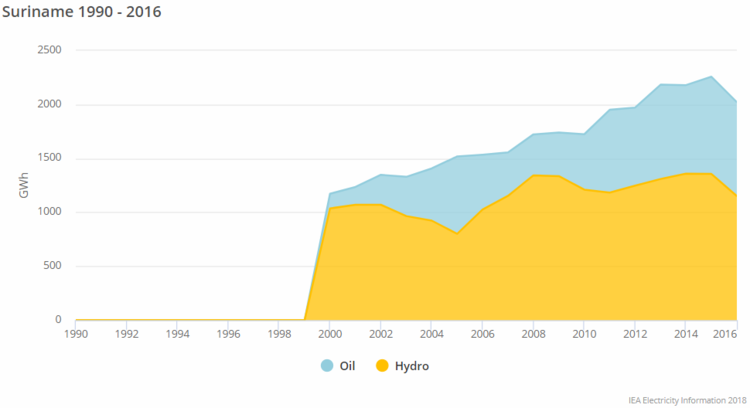 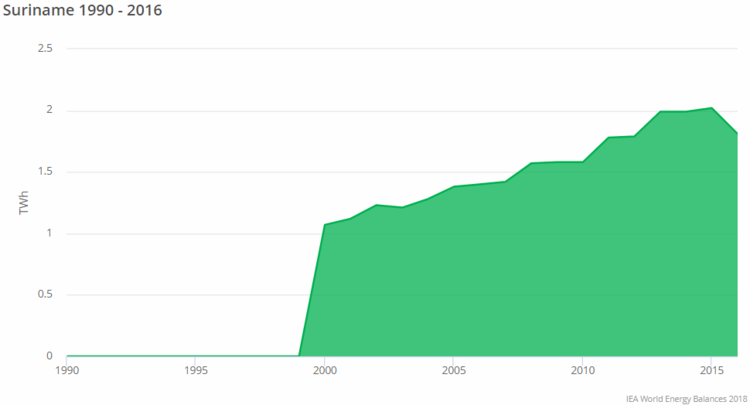 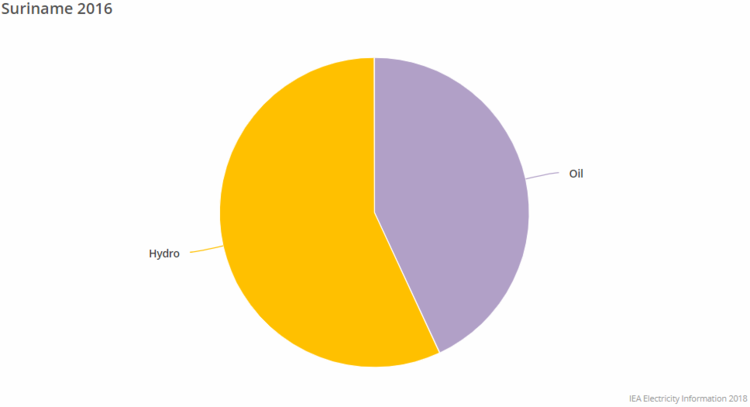 Suriname's Different Shares of Electricity Generation by Fuel in 2016 (IEA, 2018)

Suriname's power sector consists of a number of individual power systems, of which some are interconnected[5]. In the region of Paramaribo, electric power is supplied by means of: 180MW of hydroelectric power, supplying about 75% of the energy, and 66MW of diesel generation[5].

All the mentioned power systems above are located along the coastline[11]. Within the country's interior, 111 villages are equipped diesel-fueled electricity generators, with a capacity range 15-149kW[11].

The main electricity suppliers in Suriname are[11]:

From those suppliers, Suralco's Afobaka hydro plant is the largest, and it delivers the majority of the electricity consumed[11].

The electricity sector in Suriname has been foreced to be dependent on development aid, both directly and indirectly[11]. The required necessary investments in the sector are either postponed, dismissed or scaled down, consequently causing a backlog of maintenance activities, and an increasing inability to keep up with the growing demand for electricity[11].

Suriname is a rich country in its natural resources (uranium, oil, gas, sunlight, hydro, biomass etc.), which with the current available technologies can produce huge amounts of energy[11]. Yet, the country suffers few failures when it comes to the operational and maintenance practices of the existing power systems[11]: 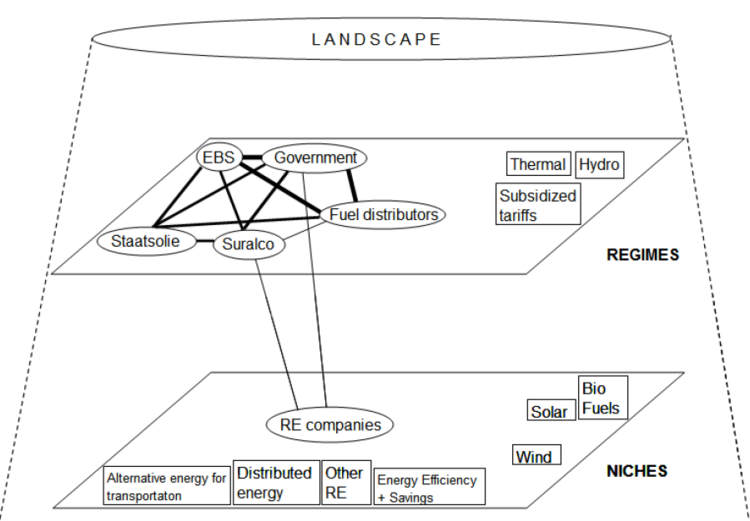 Between the richness of the natural resources of the country, and the poorness of efficient and proper operating and maintenance, the security of Suriname’s energy sector’s suffers many uncertainties, which can be divided into[11]: 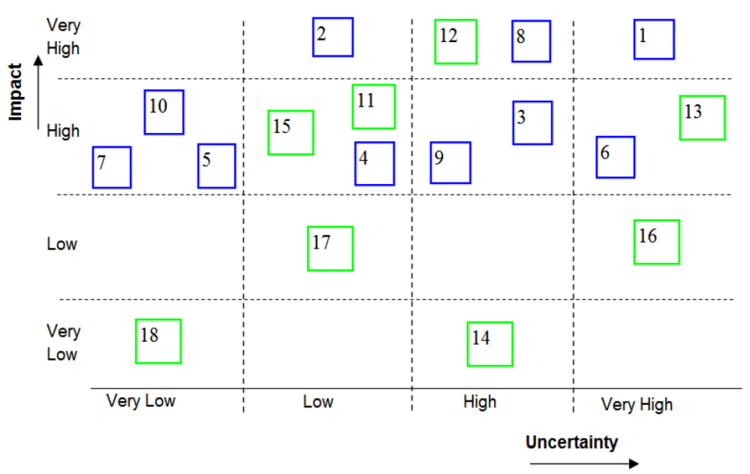 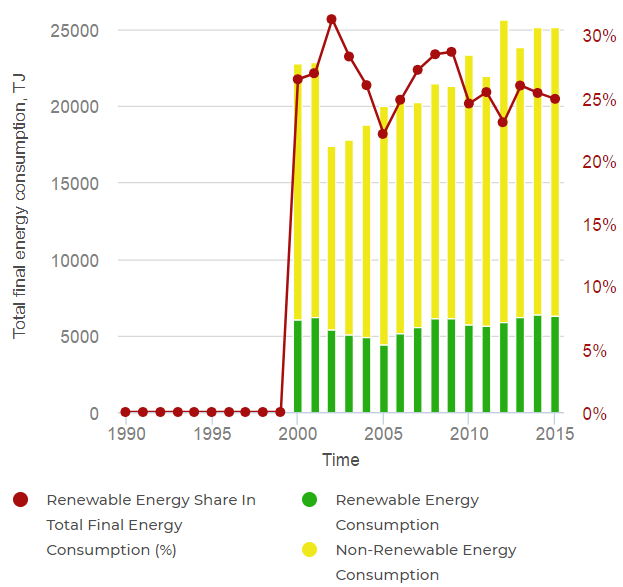 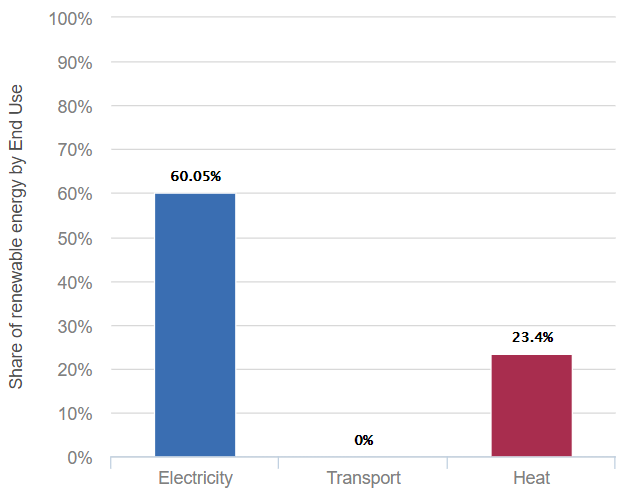 Suriname's Renewable Energy Share in Accordance to the Type of End-Use (Tracking SDG7, 2018) 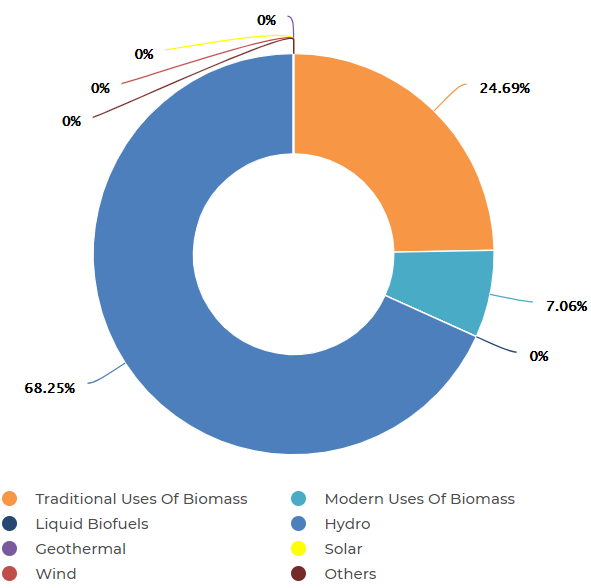 According to the International Hydropower Association (IHA)'s 2017 report on global hydropower status, Suriname ranks as the 11th country in South-America in terms of installed capacity with 189MW in 2017[13]. 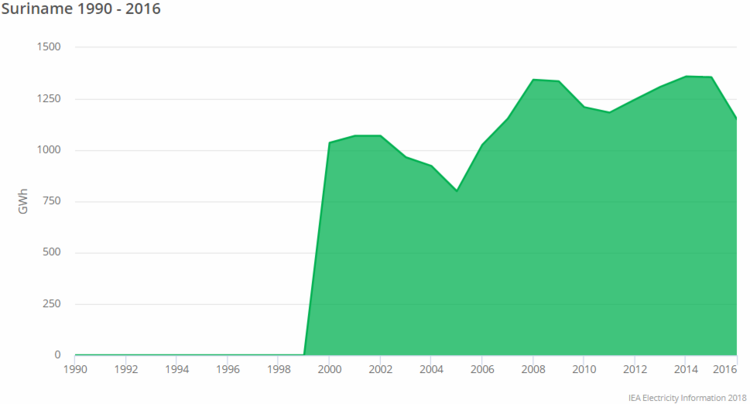 As illustrated in the following graph, hydro-power generation utterly dominates the renewables' sector in the country, with about 100% Suriname's renewables' generating capacity. 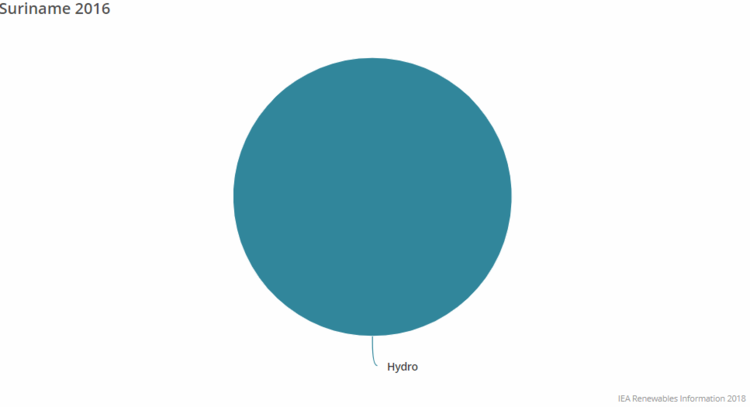 Furthermore, the Afobakka hydro dam, which is owned by Alcoa (Suralco), is considered to be the major renewable energy system in Suriname, generating a capacity of approximately 189MW[14].

The 2nd largest renewable energy system in the country is Rosebel Gold Mine Company’s grid-connected 5MWp PV system[14]. The system's generated electricity is used by the company for mining purposes[14].

In addition to the mentioned systems, the country has a limited number of small PV systems, which are installed in different places, including the Hinterland of Suriname, such as[14]:

Furthermore, stand-alone PV systems are used by the telecommunication companies for powering their towers in the country’s interior[14]. The ‘Medische Zending’, which is responsible for the health care, also uses PV systems’ generated electricity to power their cooling systems in their offices in the interior, and for keeping medicines and vaccines cool[14].

Alongside companies and schools, many citizens located in the urban areas of the Suriname’s interior have privately owned PV systems[14].

Finally, also solar boilers are used in the country for providing warm water in homes, yet on a small scale and mainly in the coastal region[14].

According to the Central Intelligence Agency (CIA) & the International Energy Agency (IEA)'s statistics, Suriname does not depend mainly on fossil fuels. The majority of the country's energy generation comes from hydro power.

The country has no clear statistics for natural gas or coal, but its fossil fuels' use comes solely from oil, as shown in the following chapter. 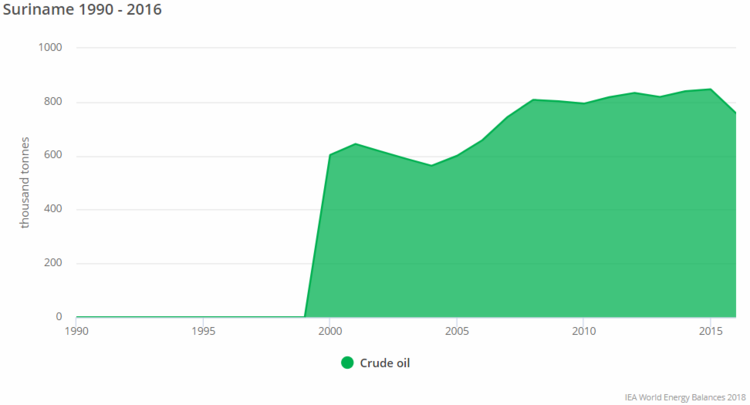 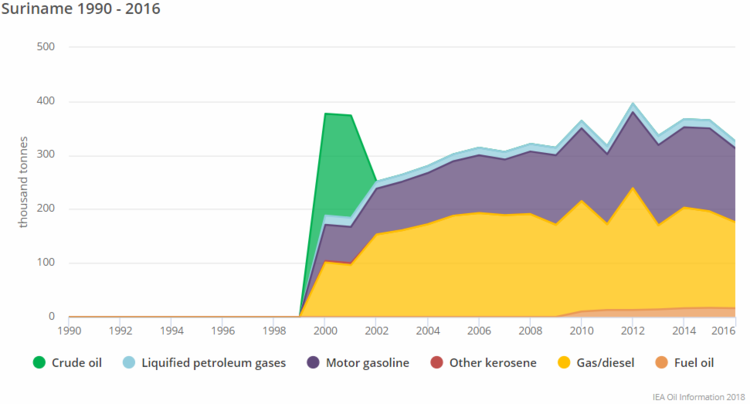 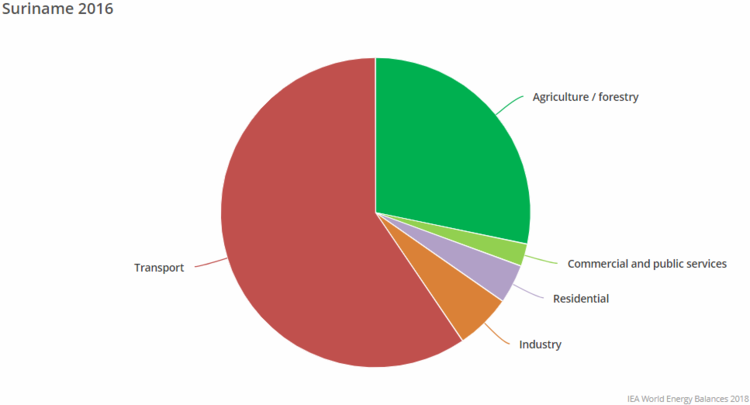 The main problems and challenges that face Suriname's energy sector are listed as follows[15][16]:

Suriname has no legislative framework for electricity or renewable energy, yet it is being developed by the country[17][5]. The country’s 2012 electric power sector draft green paper establishes the main guidelines for composing an electricity act[17]. This act should include energy security, judicial, institutional provisions and the need for an energy authority[17]. It also should contain the principles of cost recovery, energy and economic efficiency, and environmental impacts in the setting of the national utility (EBS) tariffs[17].

EBS and Staatsolie have their own regulatory role in the country's energy section, as both are responsible for setting electricity's tariffs, both oil and gas consumption in the country[5]. the later is also engaged in capacity building programs for its own staff and customers[5]. Also, both companies are involved in regulating their service's quality, which includes frequent inspections and the accreditation of equipment and procedures in according to national standards[5].

The governmental role in establishing the legal framewrok for Suriname's energy sector is represented in the responsibility of the Ministry of Natural Resources to produce and enact the country's energy policy[5].

Retrieved from "https://energypedia.info/index.php?title=Suriname_Energy_Situation&oldid=328315"
Categories:
Hidden category:
Cookies help us deliver our services. By using our services, you agree to our use of cookies.