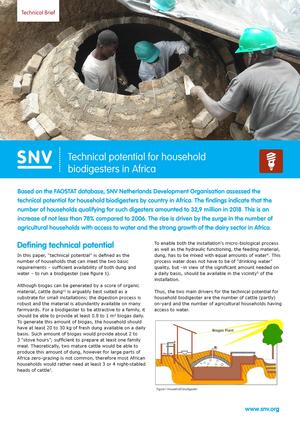 Based on the FAOSTAT database, SNV Netherlands Development Association assessed the technical potential for household biodigesters by country in Africa. The findings indicate that the number of households qualifying for such digesters amounted to 32,9 million in 2018. This is an increase of 78% compared to 2006. The rise is driven by the surge in the number of agricultural households with access to water and the strong growth of the dairy sector in Africa.


Annex 1 of the attached technical brief provides the estimated technical potential of household biodigesters by country.

Despite limitations mentioned in section 6, a strong development can be observed over the past 12 years between the first assessment (2006) and the current (2018) one. Most obvious is the increase of 78% (over 2006 value) of the total technical potential, from 18.5 million to 32.9 million biodigesters. The main drivers for this increase are, apparently despite the ongoing urbanisation, the 103% increase of agricultural households with acces to water (highest growth in Sierra Leone, Angola, Gabon, Libya, Benin, Chad, Cameroon, Nigeria and Ethiopia), and the 54% increase of dairy cattle (highest growth in Guinea, the Congo, Uganda, Senegal, Mali, Benin, Chad, Eritrea, and Niger) across Africa.

Retrieved from "https://energypedia.info/index.php?title=Technical_Potential_for_Household_Biodigesters_in_Africa&oldid=303206"
Categories:
Cookies help us deliver our services. By using our services, you agree to our use of cookies.