Although Thailand is 99% electrified, the primary source of energy is domestic and imported natural gas, creating the issue of energy security. Thus, energy diversification should be the prime goal to Thailand to ensure sustainable supply of energy in the country. As of 2012, 45% of primary energy comes from natural gas, 36% comes from oil, 16% comes from coal and 3% comes from hydro. [1] Bioenergy is the dominant renewable energy source in Thailand's end use sectors with 15 TWh generated in 2015 (equal to about 75% of all renewable generation in Thailand)[2]

Thailand has different tariffs for the residential, commercial and industrial sectors and is explained in the table below[1]: 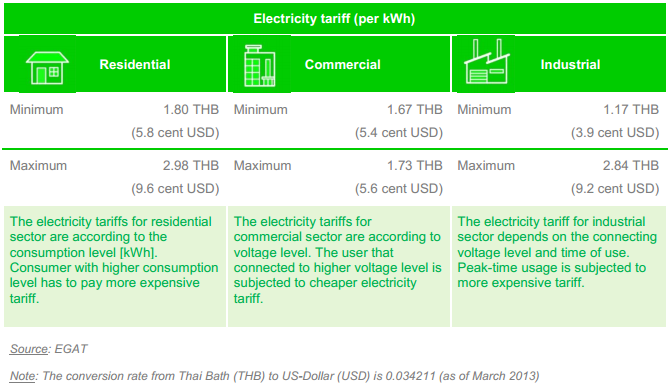 In 2016, 60% of Thailand's energy came from imports. Therefore energy security with low energy price and environmental sustainability are the key priorities for Thailand and is document in the Thailand Integrated Energy Blueprint 2015-2036. The Blueprint was drafted in 2015 by merging five major energy plans into one documented. Thailand has also committed to reduce greenhouse gas emissions by 20-25% by 2030 and also set a renewable energy target of 30% of total final energy consumption by 2036 it its 2015 Alternative Energy Development Plan. Both the policy promote highly efficient green alternatives in Thailand. [3]

Retrieved from "https://energypedia.info/index.php?title=Thailand_Energy_Situation&oldid=264194"
Categories:
Hidden category:
Cookies help us deliver our services. By using our services, you agree to our use of cookies.