The Economics of Renewable Energy

Renewable energy (RE) technologies' market is on the rise, and the world is witnessing a new energy transition with many factors and drivers pushing it.

To properly understand this phenomenon, it is vital to apprehend the correlation between the development of economies and the different energy transitions through history. It is also important to understand the rationale behind the current transition to renewables and their economy, This article presents and discusses both points.

The histories of energy transitions, development of economies and industrial civilizations, all go hand in hand[1][2]. Going back in time, people only needed to cover their basic needs, such as food, which -at the very beginning- was met by using firewood for cooking and heating[1][2]. Further in time, people started practicing agriculture in the first formed human communities, essentially depending on the sun for that practice, in combination with biomass[1][2].

As economies evolved and developed into complex forms, firewood and other biomass were no lonager able to meet the increasing demand in energy[1][2].So people started turning into hydropower, then to coal during the 19th century, oil and natural gas in the 20th, in addition to nuclear that was introduced in mid-20th century as well[1][2].

Therefore, it is apprehendable that each critical change in the economic system -along history- was always accompanied with a major energy transition -and vice versa-, shifting from one major energy source to another[1][2]. Currently, while fossil fuels (coal, oil and natural gas) are the dominant energy sources, the transition is already taking place from these sources into renewables (solar, wind, hydro... etc.)[1][2].

Though, the 21st century energy transition is going underway, not mainly because of change in human needs, but due to other factors as well[1][2]:

Considering the added costs to mitigate, adapt to or fight the environmental side effects of using fossil fuels, renewables might be the only option that people/societies/governments have to adopt, in order to reform the current economic system –at least in the energy sector- into a new one.

Scale is also an important issue. This is due to the fact that fossil-fuel technologies have been developed, improved and manufactured on an increasing scale for a century. This is not yet the case for renewables[3].

Economically, projections of energy sources’ prices and their technologies are vital for forecasting the economic options of the energy supply, also with few critical questions in mind: Should the choice of a technology be based on its current market price or because of its potential future cost reductions? Which technologies offer the most effective outcomes for specific applications? If the current technology is too expensive, should governmental subsidies help to achieve cost reduction for economic viability or is it better to wait for market forces –Smith’s invisible hands- to do the job?[4]

Reasons which have contributed to the acceleration of both public and private investment in renewable energy[2][5]:

Utilizing renewables would help to avoid these problems, create new job opportunities and reduce the drain on hard currency for poorer countries. Because conventional fuels have received long-term subsidies in the past, it is vital that governments support the development of renewables in the form of financial incentives that can create a level playing field [6].

The future of the renewables industry depends on finance, risk-return profiles, business models, lifetime's investment and a sum of other economic, policy and social factors. Many new sources of finance are possible such as insurance funds, pension funds and sovereign wealth funds along with new mechanisms for financial risk mitigation. Many new business models are also possible for local energy services, utility services, transport, community and cooperative ownership, and rural energy services [7].

In 2011, the global investment in renewable power and fuels increased to a new record. Significantly, developing economies made up 35% of this total investment [8]. In addition, the whole period 2004-2017 has witnessed a remarkable increase in investments in renewables, either in different sectors, or for different technologies, in different countries with different economic systems, as illustrated in the following figures[9]. However, recent years have seen investments in renewable energy in the power sector stagnate. Yet, renewable power generation capacity continued to be installed at record pace mainly thanks to continuously falling technology cost. Notable trends for 2018 were that investments continued to be geographically more widely spread, with 29 countries now recording USD 1bn or more in investments (25 countries in 2017), and an additional 14 countries exceeding USD 500m.[10] 2018 also marked the fourth year in a row, where investments in developing countries were higher than in developed countries.[10] 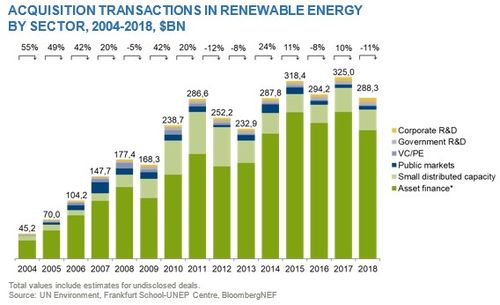 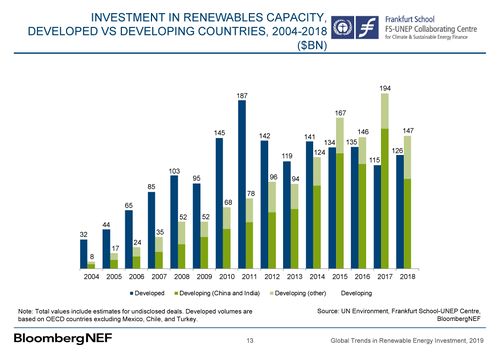 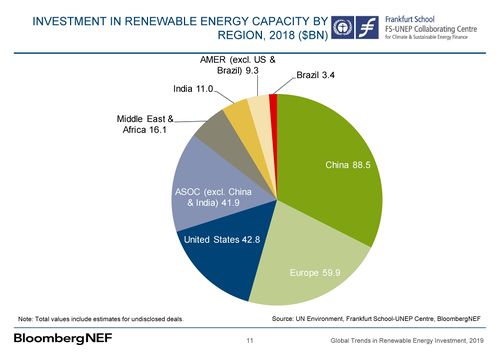 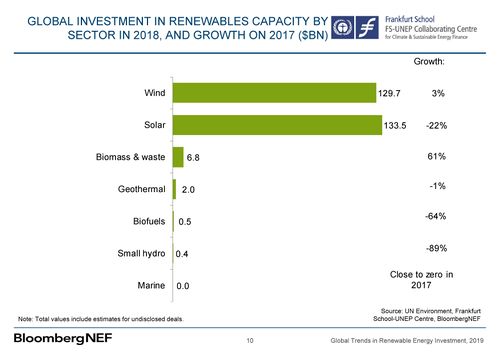 Renewable energy technologies (RETs) continue to face a number of barriers. However, the major challenge is mainly economic, as the issue of renewable energy technologies' costs is vital and central for the prediction of how rapidly the current energy transition will be taking place[2][11]. The costs include: infrastructure investment, day-to-day operations, market costs of supply and the environmental costs of the different energy sources[2][11].

Therefore, the debate remains mainly focused on the economic and financial perspectives, particularly on the cost-effectiveness of renewable energy technologies, and the possible various economic incentives to promote renewables globally in terms of: regulatory design and affordability[11].

The cost advantage that fossil fuels used to have over renewable energy sources has been decreasing recently, with some renewable technologies (Solar PV, wind, hydropower) already competing fossil fuels directly on the financial frontier[2]. Furthermore, renewables' costs are expected to decline even further, and those of fossil fuels will incline[2]. The following two figures show that -while on one hand- the oil prices are on the rise during the 2000s, on the other hand, investments in renewables are on the rise during the same period, thus reflecting its competitiveness against oil in recent years. 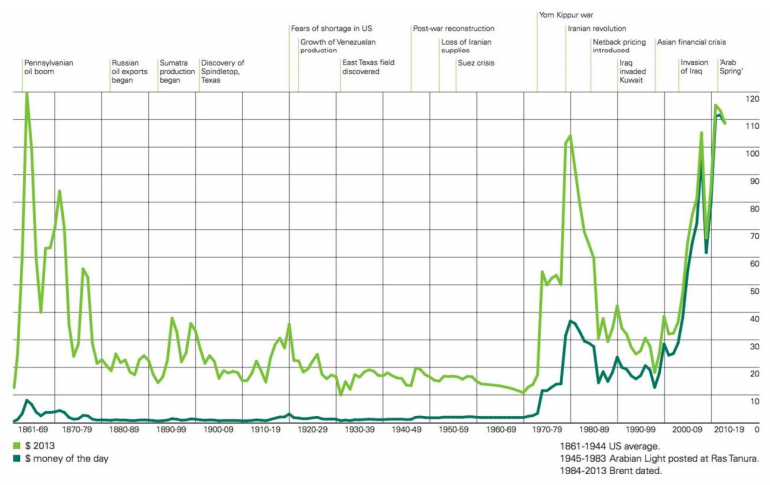 The Change in Crude Oil Prices (USD per Barrel) Since 1861 with Accordance to Global Major Events (Cottrell et al., 2015) 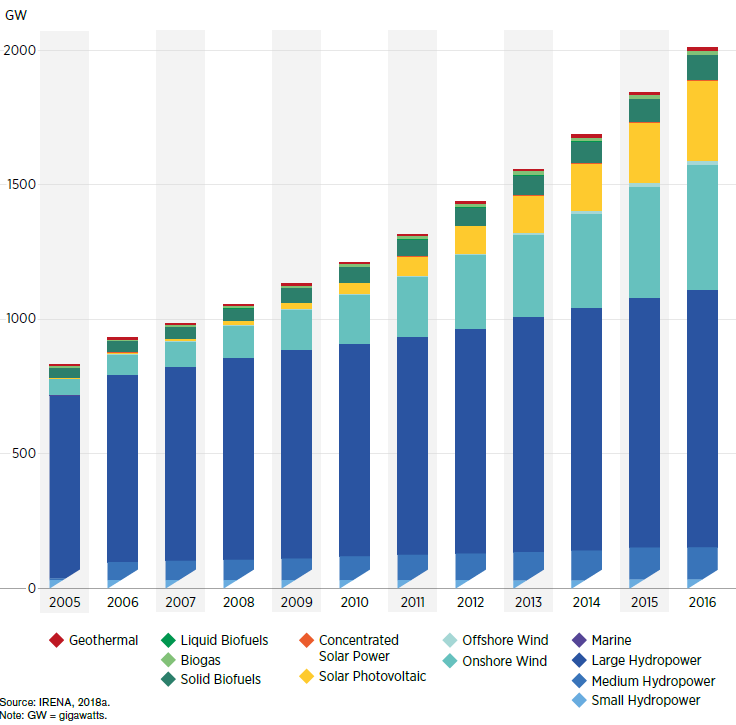 Trends in RE Installed Capacity by Technology (IRENA et al., 2018)

The renewables' market development during the past 10-15 years had few moving factors, which can be summarized as follows: 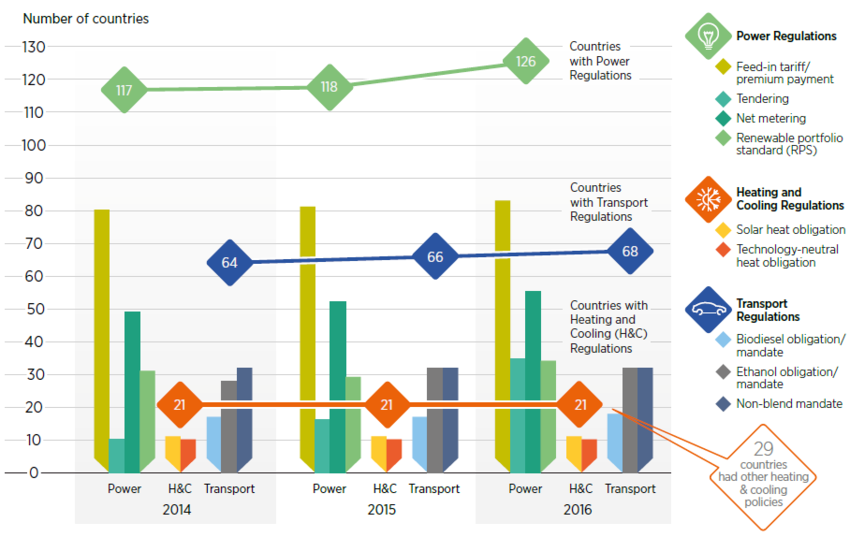 According to the most recent reports on renewable energy technologies, from IRENA, REN21 and IEA, electricity costs from almost all the renewable projects that were commissioned in 2017, have continued to decline[13][17][4]. Projects of bioenergy power, hydropower, geothermal and onshore wind, which were commissioned in that year, have widely fallen into the generation costs' range of fossil-generated electricity, and furthermore, some of these projects have actually undercut those of fossil fuels-based ones[17]. 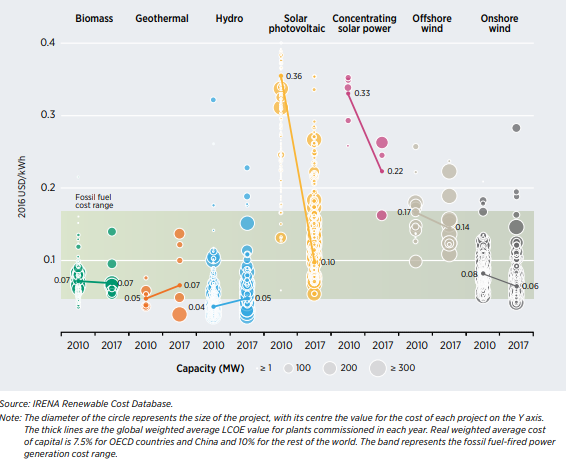 The most common methodology for comparing different energy sources, is to calculate the Levelized Cost Of Energy (LCOE). LCOE measures lifetime costs, including building and operation of a power plant, divided by lifetime energy production/output[15][17][2].

Cost metric analysis for the calculation of LCOE (IRENA, 2017) 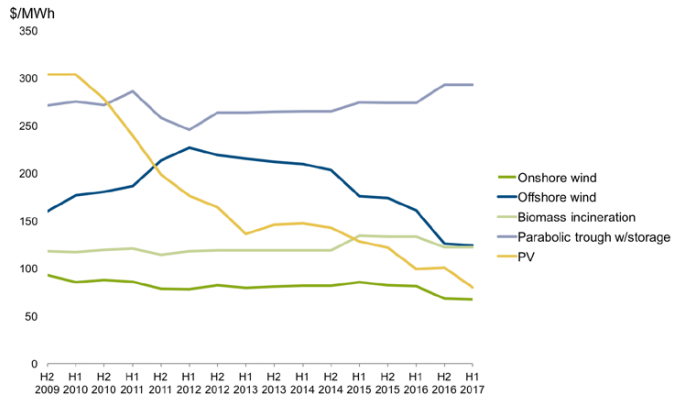 As shown in the figure above, Global weighted LCOE of utility-scale solar PV has witnessed a remarkable drop (approximately 27%) since 2010, reaching USD 0.10/kWh for the new commissioned projects in 2017[17]. Under the right conditions, it will potentially decline to USD 0.03/kWh from 2018 onward[17].

Onshore wind is already one of the most competitive sources for generation capacity. Recent auctions in Brazil, Canada, Germany, India, Mexico and Morocco have resulted in LCOE as low as USD 0.03/kWh[17].

On the other hand, many auctions predict that by 2020, both Concentrated Solar Power (CSP) & offshore wind would have the potential to provide electricity with LCOE within the range of USD 0.06 - 0.10/kWh[17]. 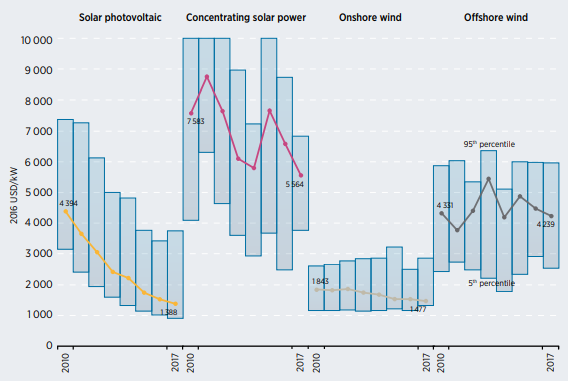 The varying fall ranges in LCOE for solar and wind power in particular have been mainly driven by the reduction in total installment costs, which is affected by three main forces[17]:

Based on current installed projects and auction data, in combination with mass production increase and specific investment costs, electricity from renewables -sooner rather than later- will be cheaper than that from fossil fuels[15][17]. All the renewable power generation technologies are expected to fall within the fossil fuel cost range, with the majority having the potential to undercut it[15][17]. This will significantly lower the LCOE of all technologies, eventually leading to a market potential increase and development for renewables[15][17].

Costs relative to fossil fuels are also important particularly because:

1. Fossil-fuel energy does not reflect its full social and environmental costs.

2. It is more expensive to deliver non-renewable energy in some places than others.

3. Fossil Fuels are fast depleting and scarcer than RE

As the markets develop, the costs normally do as well, as both developments go hand in hand[4][2]. The previously mentioned factors push the market to increase its renewables' volume, leading to economies of scale. On one hand, this reduces the price and later the actual costs of the technology, while on the other hand, reduced prices increase market volumes, again producing economies of scale, eventually resulting in a feedback loop, that either way paves the path for renewables[4][17].

The continuous pressure on market prices and its margins is rapidly forcing the market to change, as renewables' costs have considerably declined and are still on the decline[4]. Their costs are expected to go down even further over the coming few years[12][4]. Furthermore, adding to renewables' economic evolution, both public commitments and the maturing technologies, investments in renewables have rapidly increased turning the renewables industry to a very competitive sector against other energy resources[4]. However, the competition is not only limited within the energy or power sector itself, but different renewables are even starting to compete against each other within the renewables' sector itself[12][4].

With costs of renewables are continuing to fall, drastically in solar PV, followed by wind and concentrated solar power closely behind, the global installed capacity has exponentially grown[12][4]. A world record amount of recently installed renewables' (especially solar PV, wind, CSP & hydro) capacity has been added in the past few years[12][4]. Thus adding up to almost two thirds of the all new generating capacity installed globally in 2016[12][4].

Renewables' power capacity investments have by far surpassed those of fossil fuels in the year 2017[12]. The renewable energy market has been catalyzed by increasing innovation, competition and policy support[12]. Hence, radical technological advances and sharp cost reduction in renewables' sector have been achieved, pushing renewables to outpace any other technology source[12]. 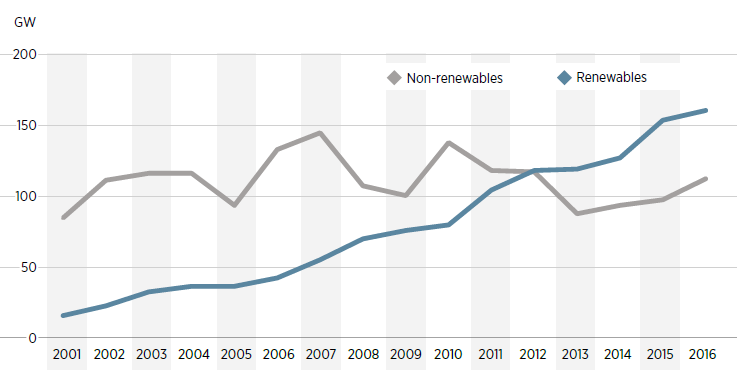 Though renewables' market is inclining, and most probably will do so for the coming decades, most of the recent reports suggest that it would still not be enough to meet the global goals by 2030. Therefore, the following section presents some strategies that can push and encourage investment in the sector.

Expansion of Renewable Energy Use:

The following points provide a set of requirements and recommendations for a successful and more efficient cost reduction policies for renewables[11]:

A survey conducted by REN21 in their 2017's Renewables Global Future Report, resulted in a noticeable uncertainty regarding future projections of fossil fuels costs' development[4]. One third of the participating experts expected a rise from the 2015's recorded average of USD 52, to over USD 1000 in the near future while the second third completely disagreed with the first, and the final third remained uncertain and neutral with both opinions[4].

On the other hand, with the current market changes in the energy sector, and the remarkable technological achievements, especially for solar PV and wind technologies, the estimates of future renewables equipment cost were found to be more predictable, less risky with a significantly higher certainty than fossil fuels, as about 3/4 of the survey participants agreed that renewables' costs will continue to fall and in more accelerated fashion than that of fossil fuels[4].

Furthermore, the majority of the survey participants believed that the investments in renewables will continue rising along the coming decades, at least until 2050[4].

Experts' predictions regarding the continuity of renewables' costs fall (REN21, 2017)

Experts predict investments in RE to continue rising through the coming decades till 2050 (REN21, 2017)

Retrieved from "https://energypedia.info/index.php?title=The_Economics_of_Renewable_Energy&oldid=305315"
Categories:
Cookies help us deliver our services. By using our services, you agree to our use of cookies.