There's a big lack of electricity in rural areas. At the same time, farms and mills in these off-grid areas produce large quantities of biomass waste that is either burned or dumped in open fields. This article presents one solution that addresses both these challenges, essentially killing two birds with one stone.

Every year, the world’s rice producers create millions of tonnes of waste in the form of rice husk. Rice husk is the outer layer of the grain, which is removed during the milling process. Colombia alone generates 340,000 metric tons of husk annually [1]. This has an adverse impact on the environment since much of it is either burned or simply dumped in fields.

Rice mills, and especially rice farms, are often located in rural areas where power is either unavailable or unreliable. To power their facilities and energy-intensive processes, they use diesel generators that are expensive to run and pollute the air. In addition, the drying of rice, which is required to allow for storage, transportation and milling, is an energy intensive process and poses a significant cost burden on the rice producers.

TEOPOWER minimizes the volume of rice husk waste and other types of biomass waste such as sawdust, olive pits, bagasse, coffee pulp and soya bean residue by turning it into green electricity and heat, essentially killing two birds with one stone. 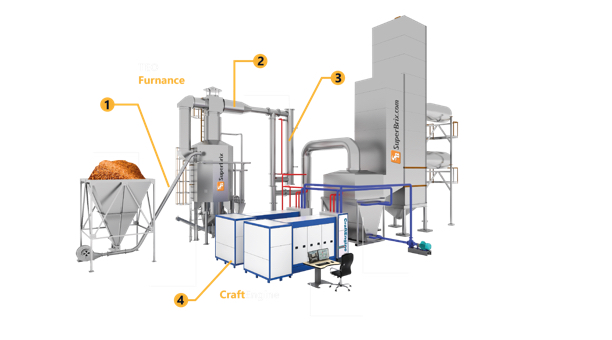 TEOPOWER minimizes the volume of rice husk waste and other types of biomass waste such as sawdust, olive pits, bagasse, coffee pulp and soya bean residue by turning it into green heat and electricity, essentially killing two birds with one stone.
TEOPOWER is a combined heat and power generation (CHP) system that can transform a rice farm or mill into a self-sufficient renewable energy generating facility. It produces power from rice husk and other biomass waste at less than EUR 0.10 per kWH, and can be installed on site in less than four weeks.

• Provides flexible, on-demand base-load power generation
• Provides renewable heat and electricity from an agricultural waste product at less than EUR 0.10 (USD 0.11) per kWh
• Reduces a rice mill's overall operating costs by eliminating the need for electricity generation from diesel generators
• Reduces the costs for drying of rice by eliminating the use of diesel, gas or wood
• Eliminates agricultural waste and hazardous disposal practices, and thereby complies with more stringent environmental standards
• Turns agricultural waste into valuable ash to be used for fertilization and thereby reduces the need for fertilizers
• Can reduce up to 2 400 tonnes of CO2 per year
• Allows for easy operation and simple maintenance/servicing
• Provides a typical payback period of between 2 to 5 years
• Fast implementation (takes less than 4 weeks to set up)

Small to medium-sized farmers and agricultural producers, such as rice millers in rural, off-grid areas.

TEOPOWER can generate electricity from 40 to 240 kW per hour. It uses different sizes of TEO furnaces and modules of CraftEngines to match the power demand. Each 40kW electrical power module consumes about 200 kg of rice husk per hour, which prevents about 200 tonnes of CO2 emissions annually compared to CO2 emissions from diesel-generated electricity. If the excess heat is used for drying, a total of 600 tonnes of CO2 can be eliminated annually.

A Collaboration between Norway and Colombia

TEOPOWER combines Viking Heat Engine’s electricity-generating heat engine, the CraftEngine, with SuperBrix’s award-winning TEO biomass furnace. By using the CraftEngine’s electricity-generating capability, the TEOPOWER can produce electricity in addition to heat for the drying process.
SuperBrix is an award winning agro-cereal technology company from Colombia with over 50 years of experience within the areas of research and development, turnkey project development and manufacturing. Adding to its list of acknowledgments, SuperBrix was awarded an innovation prize by the Nobel Peace Prize Winner and Colombia’s President, Juan Manuel Santos, in 2016. SuperBrix’s first biomass furnace, the TEO I, was designed in 1980 and mainly used for drying. The latest commercial version of the TEO line, the TEO IV, was released in 2004. This version has been sold globally in excess of 150 units, and is mainly used for drying of rice.
Viking Heat Engines (VHEs) is a Norwegian company that was established in 2009. Together with AVL, one of the world’s leading engine design companies, it has developed the CraftEngine, a piston-based engine system for sustainable electricity generation that converts heat into power.  This heat engine has been tailor-made to effectively convert low-temperature heat into electricity, and can operate on any heat source ranging from 80 to 200+ °C.
SuperBrix and Viking Heat Engines joined forces in early 2016 to develop a small-scale combined heat and power (CHP) system that uses rice husk for power generation and/or drying, known as TEOPOWER. The first TEOPOWER is currently operating at SuperBrix’s test facility in Barranquilla, Colombia, and by the end of April 2017 (three months after the commissioning of the first TEOPOWER) two contracts had been signed, one with Nand Persaud in Berbice, Guyana, and another with Hacienda La Palma in Barranquilla, Colombia.

The TEO Furnace:
SuperBrix has developed a line of cyclone biomass furnaces, the most recent being the TEO IV. In this model, rice husk is being fed into the combustion chamber along with ambient air, where it’s being burnt by using a high-velocity cyclone to allow for complete combustion. The ash falls to the bottom of the chamber, while the hot air/flue gas is emitted through the upper section of the chamber where post combustion transforms it into a clean flue gas. The ash is cooled and discharged by means of a screw conveyer. This ash is a soil additive, and used to enhance the productivity of rice farms.
The hot flue gas emitted from the TEO furnace is mixed with cold air in a mixing chamber, and used in the drying process in different types of rice dryers.
The CraftEngine:
The CraftEngine operates on the principles of the Organic Rankine Cycle (ORC). Heat is transferred to the working fluid/refrigerant at a constant pressure, increasing the temperature and pressure of the working fluid until the boiling point is reached. The vapour then undergoes superheating, followed by adiabatic expansion in the piston engine (expander), causing a decrease in temperature and pressure, and thus generating power. Upon cooling in a condenser, the vapour is condensed to its original liquid state, allowing the process to be repeated.
The thermodynamic process of the ORC [2] is shown below: 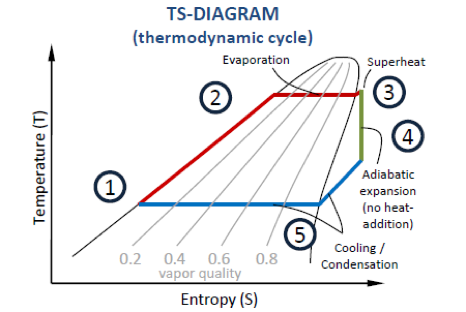 1-2:Pre-heating the working fluid
2-3:Boiling and superheating                   3-4:Adiabatic expansion                                  4-5:Desuperheating/recuperation        5-1:Condensing and pumping
A typical CraftEngine application uses heat ranging from 80 to 200+ °C to operate the ORC circuit. Heat is transferred to the working fluid/refrigerant, causing it to boil at high pressure. The working fluid is then injected into the piston engine that drives the electrical generator.
During the condensation process, and similarly to any ORC process, residual heat is released at a lower temperature level through a condenser or dry cooler.
Thanks to the piston-based design, the CraftEngine offers the following benefits:
1) High flexibility and adaption to almost any fluctuation in the heat source
2) Efficient use of low-temperature heat
3) Low capital costs due to mass-production design that uses standard piston engine manufacturing processes
4) Low operating costs
The TEOPOWER:
The TEOPOWER integrates the CraftEngine into the TEO process. By using the CraftEngine’s power-generating capability, the TEOPOWER can produce electricity and heat for drying processes.
In the TEOPOWER, the hot flue gas, exiting the TEO furnace at about 600 °C, is directly routed to a heat exchanger where the gas is cooled down by heating a hot water circuit to about 180°C. This hot water is supplied to the CraftEngine to generate power.
At the test facility in Barranquilla, both the “CHP” and “electricity production mode have been demonstrated. In the CHP mode, the flue gas exiting the heat exchanger at 200°C is routed to a mixing chamber where it’s being mixed with the warm air emitted from the CraftEngine’s dry cooler. In the electricity production mode, the hot flue gas exiting the heat exchanger is simply emitted to the atmosphere.
Suitability with other biomass waste:
The demo plant in Barranquilla is used as a showcase for potential customers as well as for testing of different types of bulk biomass wastes. Tests using saw dust, olive peats, bagasse and chicken manure are currently being scheduled.

The first commercial application of a TEOPOWER will be installed at the rice milling facility of Hacienda La Palma, Colombia. Hacienda La Palma is already using TEO furnaces for heat generation. However, excess rice husk still need to be dumped from the milling process. Hacienda La Palma will use that rice husk to produce up to 160kW of power to stabilize the farm’s electrical grid connection, reduce the use of diesel backup power and make the operation more reliable. With the current power prices in Colombia and the added cost of running diesel generators, the payback period of this installation will be around 3.8 years. The TEOPOWER 160 will consist of a TEO 3000 furnace and four CE40 CraftEngines. The mode for this facility will be electricity generation only. Future installations may include heat output options.

Future market potential for TEOPOWER:
The rice market is well established, vast and growing. Rice, corn and wheat are the three most important food crops. The world rice production is currently at 750 million tons per year, and growing steadily at about 2 per cent annually, which is in line with the world population growth. 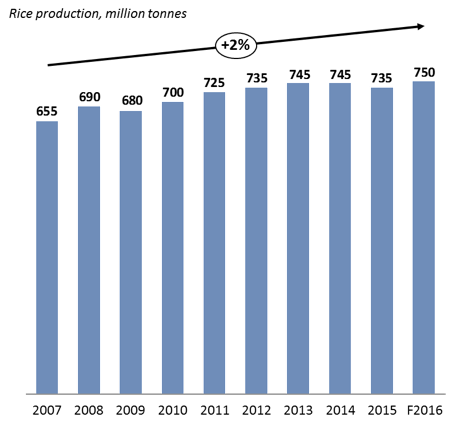 TEOPOWER provides a solution to the growing need for food production, and especially in rural areas where access to electricity is unreliable and scarce.
Another potential market for TEOPOWER is wood production in remote forest areas. A project with a Colombian company is being developed where TEOPOWER will be used to produce electricity from lumber residue.
The identified markets so far are South America and Africa where the there’s a huge need for rural electrification [4] and where both SuperBrix and Viking Heat Engines already have strong partnerships.
Asia is another big market for TEOPOWER where rice production is the largest in the world and wheat is becoming an increasingly popular crop. SuperBrix recently built a drying facility for corn kernel using corncobs in the Philippines and the established relationships will be used to penetrate the Asian markets.

Biomass waste can be utilized to be turned in much needed electricty in rural areas.

The TEOPOWER produces power from rice husk at less than EUR 0.10 per kWh, and can transform a rice facility into a self-sufficient renewable energy facility. By burning rice husk, the TEOPOWER can reduce up to 2 400 tonnes of CO2 per year. Other typical biomass waste products that fit the TEOPOWER scope include sawdust, olive pits, bagasse, coffee pulp, soya bean residue and more.

For more information, visit www.vikingheatengines.com​.
Retrieved from "https://energypedia.info/index.php?title=Transforming_Biomass_Waste_Into_Electricity&oldid=256581"
Categories:
Cookies help us deliver our services. By using our services, you agree to our use of cookies.