Turkmenistan is located in the south of Central Asia and covers a total of 488,100km squared. Flat desert covers 80% of the country, though there are some slight elevations along the border to Afghanistan and Iran. Turkmenistan is part of two main seismic zones of the world. Approximately 8.8% of the land area is covered by forest[1] (The deforestation rate was not available.)

Water resources in Turkmenistan are very limited and the climate is mostly arid subtropical with little rainfall. In fact, Karakum Dester is one of the driest deserts in the world. However, the country's temperatures are pretty mild. The mean low temperature in the country is 10.4 and the average high temperature is 23.2°C. [2]Turkmenistan has enormous natural gas deposits and it therefore known as a "gas republic". It is also rich in petroleum.

Turkmenistan has a population of 4.9 million (as of 2009) with a population density of 11 people per km squared. The density varies drastically between desert areas and oases. In oases it often exceeds 100 persons per square kilometer. 50% of the population lives in rural areas and 50% in urban areas. The literacy rate is 98.8%

The electrification rate in Turkmensitan is 99.6%. Electricity is mostly produced in 8 thermal power plants with an installed capacity of 3.3 GW. Electricity consumption by sector is the following: agriculture and foresty 31.8%, industry 36%, transport 2.6%, and residential 21%.

Turkmenistan's energy market is controlled by the State. Primary energy shares (in 2008) consisted of 72.4% gas and 27.6% oil. Most of the populations recieves natural gas and electricity for free. Those who do pay, enjoy the world's lowest energy prices. Yet, inefficiency and waste are clearly a result of this policy. In addition, the power infrastructure, inherited from the Soviet era, is in bad shape and needs to be repaired. Power lines wasted a significant portion of electricity in 2006. The distribution system also suffers from severe power loss.

Demand for renewable energy sources in Turkmenistan is practically inexistent. Turkmenistan has relatively low potential for bioenergies, hydro power, and geothermal energy. While it does have tremendous wind and solar power with 300 sunny days per year (equaling 2,00 kW/m²/yr) and wind potential equal to the country's fossil fuel potential, its wealth of oil and gas overshadow these potentials.

Percentage of energy used for cooking in urban and rural areas 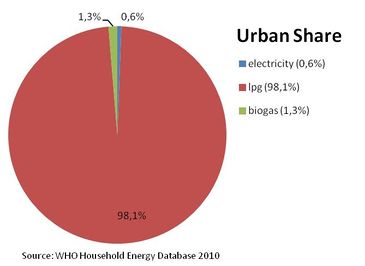 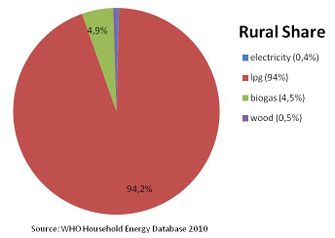 Retrieved from "https://energypedia.info/index.php?title=Turkmenistan_Energy_Situation&oldid=264320"
Categories:
Hidden category:
Cookies help us deliver our services. By using our services, you agree to our use of cookies.