This article has been adapted from the GIZ Sourcebook on Urban Transport and Energy Efficiency. [1]

Average annual worldwide primary energy demand is projected to increase by 1.5% by 2030. This would lead to an overall increase in energy demand of 40% between 2007 and 2030. Fossil fuels will remain the primary source of energy worldwide, while the share of renewables will only increase slowly. The different sectors of end use (transport, industry, households, services, agriculture and non-energy uses) will drive the growth in demand in different ways, but transport will remain the single largest final energy consuming sector.

Energy-efficient transport offers huge potential for reducing the demand both for oil and for energy in general. The International Energy Agency (IEA) estimates that advanced technologies and alternative fuels (hybrid vehicles, electric vehicles and fuel-cell vehicles) can reduce the energy intensity of transport by 20 to 40% by 2050, compared to its own Reference Scenario. Such achievements could also halve the need for fossil fuels. However, even if the energy intensity is reduced total energy demand is still likely to rise above current levels due to the overall increase in demand for transport and motorisation. To cut future demand from the current levels, it is necessary not only that we shift to more efficient modes of transport, but also that we reduce the overall per capita demand for travel. 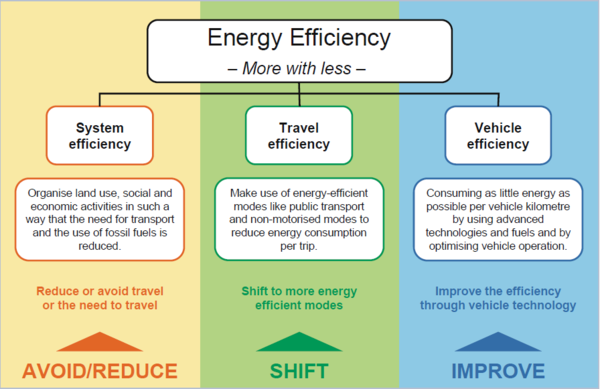 System efficiency relates to how the demand for transport (and the different modes of transport) is generated. Research has shown that infrastructure and city structures influence transport demand. Energy consumption per capita rises proportionally as city density falls. The reduction of traffic volume is a crucial aspect of energy-efficient transport. Land-use planning should therefore optimise the positioning of settlement and production structures to avoid traffic or to reduce travel distances. A dense urban structure with mixed uses is essential for high system efficiency, because it involves shorter travel distances and a modal shift from road transport (which consumes an enormous amount of space) to more efficient transport modes such as walking, cycling and public transport. The prerequisites for system efficiency do not only include a dense city system, but also proper management of the demand for transport and an adequate public transport network.

Freight transport also benefits from dense city structures with short distances. Combining residential and commercial areas reduces the transportation of private goods. The challenge, however, is to ensure there is sufficient space and high-quality infrastructure for modern industry. One possible solution is to locate a dense, suburban industrial area close to a freight consolidation centre. Outgoing and incoming freight is therefore organised and freight transport efficiency can be improved. Moreover, the bundling of deliveries to the city centre minimises pollution and noise.

Travel efficiency relates to the energy consumption of different modes of transport. The main parameters of travel efficiency are the relative preponderance of the different transport modes (modal split) and the load factor of the vehicles. An effective way of enhancing energy efficiency is to encourage travellers or shippers to use more efficient forms of transport, such as public transport and non-motorised vehicles.

Especially in urban areas, most journeys involve distances of below five kilometres. A variety of measures can be implemented to encourage citizens to travel such distances by bike or on foot. For longer journeys, public transport provides an alternative to the automobile. Increasing the share of public transport will lead to higher rates of occupancy in buses and trains, which will further increase their energy efficiency.

Besides passenger transport, energy efficiency also needs to be increased in freight transport. Rail freight is particularly energy efficient because of the high load factor; its flexibility is, of course, limited. A sophisticated logistic network, including multimodal logistics centres can help to shift freight to more efficient modes of transport.

Reducing the per-kilometre fuel consumption of vehicles increases their efficiency. This can be done with technology and design improvements, but also through efficient driving techniques. Measures can be clustered into three categories:

The strategy of improvement is not only relevant for private cars, but also for freight and public transport. Specific measures for passenger cars include the use of lightweight materials, downsizing (reducing the volume of the engine and size of the car) and/or using hybrid engines. Such technological improvements are mainly a job for vehicle manufacturers and research institutes. However, legislation and fiscal measures can be important drivers of technological advances. Local authorities can support the diffusion of efficiency technologies in the market by setting standards, raising awareness and creating incentives for consumers to buy more energy efficient vehicles.

The city government and associated institutions are responsible for spatial and urban planning, which determines the shape of the city. Strategic plans are developed for the road and rail networks and for the settlement structures. They are therefore the key actors in developing long-term strategies or master plans for greater energy efficiency. With the right incentives the use of highly energy-efficient modes of transport could be expanded and their attractiveness enhanced. Wrong incentives, which promote the use of private motorised vehicles, must be reduced. It is important that non-efficient modes of transport become less convenient to use throughout the entire urban structure.

The political will for change and strong leadership are crucial, as is the continuity of political decision making, even beyond legislative periods. Mayors and city governments have to set the overall agenda. They outline quantitative and qualitative targets, and they establish and promote common objectives that reach beyond the local government and administration. The media and the public are important stakeholders in this context.

Mayors and city governments should ensure that their local energy efficiency concepts not only solve their particular urban development problems, but also provide multiple benefits:

It is important for a city government to maintain a holistic view of its energy efficiency measures, and that it identifies and solves any conflicts that arise between different divisions. It can be helpful to establish a multidisciplinary organisational unit or to launch thematic working groups.


City councils can encourage more efficient transport through the way they manage their won municipal mobility. Similar to a private enterprise, a municipality can improve its own efficiency with the following measures:

Thus, city administrations can serve as role models for the use of cleaner technologies, and they can encourage private companies in the city to follow their example.

The private sector is highly significant, and city authorities need to be in close contact with local companies. If the local public transport system is operated by private companies, it is essential that the city authorities cooperate closely with them.

Local NGOs are also key actors, since they can exert political pressure and put energy efficiency measures on the agenda.

In many cities, urban rail and bus systems are run by different operators. Uncoordinated networks and schedules lead to long waiting times for passengers transferring from one mode of transport to another. Different fare systems force users to buy separate tickets for each leg of their journey. To address such shortcomings, the various local operators can be encouraged to cooperate in a single public transport network. To help users find their way, improved passenger information could be made available at stations and inside vehicles. In addition, a common ticketing system could be implemented. Integrating services requires greater planning and communication among the operators, but it attracts new customers.

Non-governmental organisations (NGOs) can play an important role in adjusting services and infrastructure to the needs of the users, if local administrations involve them in the decision making process. Transport and environmental organisations, for instance, can contribute to strategy formulation. Participation increases public acceptance, and at the same time imparts in-depth knowledge of people’s needs. Customer user groups can identify weakness in the local transport system, e.g. barriers to cycling and walking in the existing infrastructure. It can be useful to cooperate with NGOs when organising campaigns such as bike-to-work programmes, community cycling events or car-free days. Other NGO-based campaigns might include awareness raining activities to inform the public about the advantages of energy-efficient modes of transport.

A proper policy to enhance energy efficiency in the urban transport system must address all three levels of energy-efficient transport: system efficiency, travel and vehicle efficiency. Strategies and policy packages deliver that kind of mixed approach. Ideally, positive incentives (‘pull’ measures) need to be supported by disincentives (‘push’ measures). A well developed and convenient public transport infrastructure can attract more passengers, but that is often not enough, in itself, to inspire a major shift from private car use to public transport. Therefore, steps have to be taken to overcome these factors, such as pricing measures that increase the cost of car use, or parking restrictions that reduce the convenience. These steps will prompt a more rapid shift towards energy-efficient modes of transport.

Conclusion – The Path to an Energy-Efficient Transport System

A wide variety of potential policies and measures exists to increase energy efficiency in local transport. In order to achieve the maximum benefits, there is a need to coordinate the various political levels and actors. It is also necessary to bundle these measures into comprehensive packages. In many regions, institutional, economic and social barriers inhibit the use of certain instruments. Political decision makers and other key actors need to consider these obstacles in order to identify a path to sustainable and energy-efficient transport.

Retrieved from "https://energypedia.info/index.php?title=Urban_Transport_and_Energy_Efficiency&oldid=83175"
Categories:
Cookies help us deliver our services. By using our services, you agree to our use of cookies.