Vegeteable oil can be used as fuel for diesel engines, either as s'traight vegetable oil (SVO)' or as biodiesel (after chemical conversion). Given rising crude oil prices and the search for renewable fuel solutions, there was a worldwide hype surrounding biofuels - especially as fuel for vehicles - in industrialised countries some years ago. However frustration instantly followed, as exportoriented biofuel mass production appeared fraught with environmental and social problems. Local production and use of biofuels came back on the agenda. Since then the potentials of local electricity production based on plant oil have been more seriously considered for rural areas in the developing world.

The market of plant oils is dominated by a few crops, notably oil palm (35 %), soybean (27 %), rapeseed (16 %) and sunﬂower (9 %). At the same time, demand for plant oils is continuously growing, in the food, energy and chemical sector alike. Global production of vegetable oils has more than doubled during the last two decades, with a particularly strong increase for palm oil. Due to this development, supply security of plant oils is stressed even today[2], leading to price increases on the one hand and to unsustainable expansion of oil crop production areas on the other. In Indonesia, the main producer of palm oil, the area under oil palm increased from about 5,000 km 2 in 1980 to more than 45,000 km2 in 2005 (Bangun, 2006). The continuing trend is strongly correlated with the destruction of rainforest. Income from timber sales is used to ﬁnance the palm plantations[3]. In addition, the eco-physiological requirements of the oil palm (Elaeis guineensis) equal those of rainforest vegetation. Hence, oil palm production inevitably competes for land area with rainforest. The advantage of oil palm is its extraordinarily high oil yield potential and resulting low production costs. However, due to forest destruction and drainage of peat lands, high amounts of CO2 may be emitted, even making greenhouse gas balances negative in many cases[4]. Likewise, expansion of cropping area for other conventional oil crops meets its sustainability limits, as no additional suitable areas are available (e.g. rapeseed) or the crop also competes with forest or biodiversity protection (e.g. soybean in South America[5]). 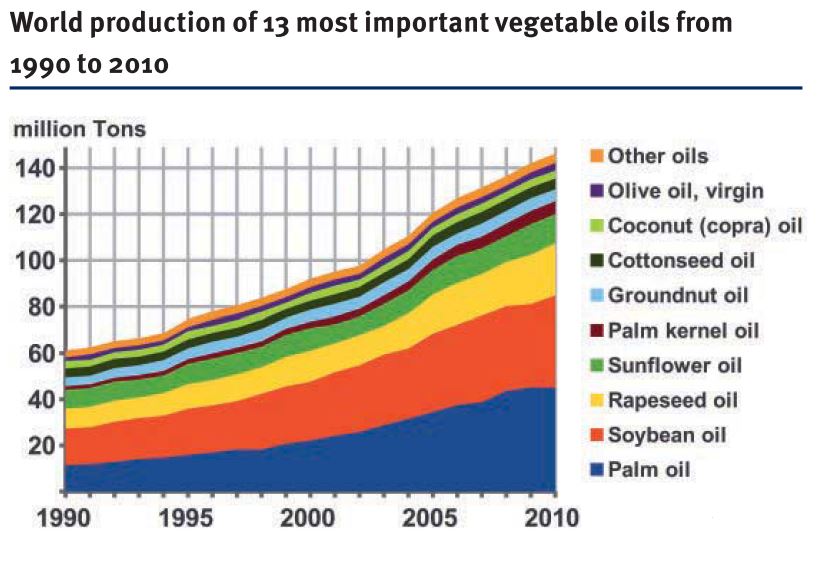 Retrieved from "https://energypedia.info/index.php?title=Vegetable_Oil&oldid=135715"
Categories:
Cookies help us deliver our services. By using our services, you agree to our use of cookies.