►Back to Hydro Portal

Venture capital is a type of private equity that refers to equity investments made, typically in less mature companies, for the launch, early development, or expansion of a business. Venture investment is most often found in the application of new technology, new marketing concepts and new products that have yet to be proven.

Venture capital is a very important source of funding for startups that do not have access to capital markets. It typically entails high risk for the investor, but it has the potential for above-average returns[1].

PSP Hydro” 6 Rwandan companies are being awarded a maximum subsidy of 50% of the total project costs to build and operate 6 micro-hydro plants and mini-grids supplying rural areas with electricity. Since the beginning of the second phase of the project in 2009, the construction of 2 hydropower plants has been completed and 3 projects are in the process of preparation and implementation. Previously, in preparation of PSP Hydro II, possible future finance instruments and mechanisms were also identified. Many instruments were already available to project developers and it was recommended to include venture capitalists early in the selection procedure of new project developers.

The traditional financial sector in Rwanda is composed of:

Two years ago three parties started within the banking sector to offer leasing products (BRD, BRC and BK) and they formed the leasing association of Rwanda. Also guarantee mechanisms are in place: the African Solidarity Fund (ASF) operates from Niger and the African Guarantee Fund and Economic Cooperation (FAGACE) operates from Benin.

Further, two venture capital funds to support the private sector have been recently opened their doors: Rwanda Enterprise Investment Company (REIC) and GROFIN. They both had contacts with project developers.

It can be summarized that the PSP Hydro project contributed making micro hydro an interesting possibility to finance for the majority of financial institutions. So far, several disbursements have been made and commercial banks continue to be involved in the financing of new projects. At this stage, conditions offered to project developers in micro hydro are in line with long term finance conditions in other segments of the economy.

Perspectives on Finance and Bottlenecks in Micro Hydro

A banker’s main focus is risk mitigation whereas a venture capitalist main focus is to build on an opportunity. A venture capitalist (VC) will focus on the management and its capability to generate future cash flows. When a bank focuses on risk mitigation the contribution of the sponsor is important, therefore the debt/equity ratio. It is all about the ability of the sponsor to bring in cash or collateral if the project goes wrong. Of course a good banker will also evaluate the management and the project but if sufficient subsidy is involved the debt/equity ratio will provide sufficient comfort. Therefore the subsidy is perceived by the bankers as an instrument to fulfill the equity requirement of the project developer. For the project developer the subsidy is an instrument to get access to a loan. It will add to the project’s equity and therefore reduces the debt equity ratio. However the venture capitalist will perceive this subsidy as a possible weakness: it might reduce the commitment of the sponsors, it might transfer ownership from the sponsors to the donor. The sponsors might get a free ride and in case of problems ask the donor to solve it. However the donor will most likely build on its own regulations to limit support to a certain maximum contribution. The donor can offer financial and technical support without too much risk.

The Table below presents the above perspectives and also how the parties have put instruments in place to overcome the challenges or mitigate the risks involved (this is written under the heading Actual Instruments). A potential alternative instrument is presented in the last column in line with a future possibly more market oriented approach to help to overcome the bottleneck.

Perspectives on bottlenecks related to finance

It seems that venture capital can contribute to solve problems for many parties. From the perspective of the banks it is real equity and gives direct comfort (lower gearing). Therefore the requirement for loans might be lower. The venture capitalist will make sure that the developers will put in sufficient money themselves. Moreover their VC contribution and the PSP Hydro II contribution will generate extra capital. The developers will have business development support for financial planning on board from the venture capitalist. This is preferable compared to an external advisor. The ministry and donors can leverage their money each investment cycle. The subsidy can be used more efficiently and more often.

Different bottlenecks on the implementation capacity and the skills of the project developers were identified by a selection of interviewed stakeholders. These bottlenecks are presented in the next table. 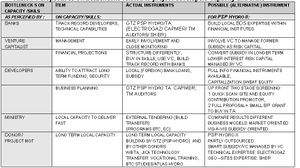 Perspectives on bottlenecks related to project developers capacity and skills

From different perspectives it is mentioned that the early involvement of venture capitalist will contribute to strengthen the management of projects and will also help to build local capacity within these venture capital firms to guide future investors and financiers. As soon as the two venture capital funds have done a few investments, this expertise will sustain within these organizations. Moreover it will be easy for the VCs to communicate with the banking sector on their specific requirements and concerns.

General Conclusions from the Case Study

Recommendations on Finance for Next Steps of PSP Hydro

Based on the above described experiences and conclusions, a mix of available market instruments for the next phase of PSP II can be presented. These instruments (venture capital, loans and guarantee instruments) are suitable to support a more autonomous development of the sector. 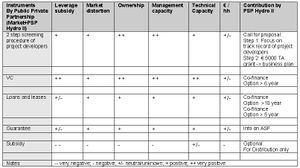 The participation of the venture capitalist has a potential positive effect on the leverage of the subsidy later on in the process (+), assuming that the VC will stay in, they will also bring money to the table. VC involvement can also have a positive effect (+) on screening the developers for their business credentials and trustworthiness. This is VC core business and therefore a realistic expectation. The VC involvement in the selection procedure has a positive effect on market distortion (it does not distort the market). Project developers are driven by their plans and intentions and not by the subsidy.

Ownership and management are two criteria where the PSP Hydro project is expected to receive assistance from the venture capitalist and therefore marked very positive (++). The financial and technical scrutinizing of the business plan will be done in more detail at the second phase. The PSP Hydro II project can offer a small grant to the winners of step 1 (e.g. € 5000). The successful project developers can use that money to buy in technical expertise. This will contribute to technical capacity of the project developers and most like contributes to the market capacity in these services as well. This is marked as positive (+) in the table.

It is unclear yet how much the connection costs per household will be affected. One could argue that less subsidy makes the total costs (for an investor) higher. However the costs related to borrowed money might induce a more efficient use of funds and end up in lower total investment costs per project. Therefore the score is presented as neutral (+/-).

In the table the use of venture capital is expected to have similar positive contribution over the investing period as compared to the selection stage. The difference is that venture capital itself is expected to generate a higher leverage of the subsidy. If the project developer and the venture capitalist and the PSP Hydro project would bring in equal amounts of money, the leverage of the PSP Hydro II component would be at least two times. Moreover the money is also leveraged with debt and finally, the money is repaid and ready to be used again[2].

Status in PSP Hydro Rwanda in 2012

Due to the limited capacity of the project developers regarding the preparation of business plans during the early stages of the project, no MHP developer has finalized a contract with a venture capital provider in Rwanda so far. One company is still in the process of negotiating the modalities for investment.

Retrieved from "https://energypedia.info/index.php?title=Venture_Capital_for_Financing_Hydropower&oldid=116498"
Categories:
Cookies help us deliver our services. By using our services, you agree to our use of cookies.