A technology which offers remarkable advantages is not used to its full potential:

The technological development of recent years, bringing more efficient and more reliable wind turbines, is making wind power more cost-effective. In general, the specific energy costs per annual kWh decrease with the size of the turbine notwithstanding existing supply difficulties.

Many African countries expect to see electricity demand expand rapidly in coming decades. At the same time, finite natural resources are becoming depleted, and the environmental impact of energy use and energy conversion have been generally accepted as a threat to our natural habitat. Indeed these have become major issues for international policy.[2]

Many developing countries and emerging economies have substantial unexploited wind energy potential. In many locations, generating electricity from wind energy offers a cost-effective alternative to thermal power stations. It has a lower impact on the environment and climate, reduces dependence on fossil fuel imports and increases security of energy supply[3].

For many years now, developing countries and emerging economies have been faced with the challenge of meeting additional energy needs for their social and economic development with obsolete energy supply structures. Overcoming supply bottlenecks through the use of fossil fuels in the form of coal, oil and gas increases dependency on volatile markets and eats into valuable foreign currency reserves. At the same time there is growing pressure on emerging newly industrialised countries in particular to make a contribution to combating climate change and limit their pollutant emissions.

In the scenario of alternatives, more and more developing countries and emerging economies are placing their faith in greater use of renewable energy and are formulating specific expansion targets for a ‘green energy mix’. Wind power, after having been tested
for years in industrialised countries and achieving market maturity, has a prominent role to play here. In many locations excellent wind conditions promise inexpensive power generation when compared with costly imported energy sources such as diesel. Despite political will and considerable potential, however, market development in these countries has been relatively slow to take off. There is a shortage of qualified personnel to establish the foundations for the exploitation of wind energy and to develop projects on their own initiative. The absence of reliable data on wind potential combined with unattractive energy policy framework conditions deters experienced international investors, who instead focus their attention on the expanding markets in Western countries.

It is only in recent years that appreciable development of the market potential in developing countries and emerging economies has taken place. The share of global wind generating capacity accounted for by Africa, Asia and Latin America reached about 20%
at the end of 2008, with an installed capacity of 26 GW. This is attributable above all to breathtaking growth in India and China: these two countries alone are responsible for 22 GW. This proves that economic use of wind energy in developing countries and emerging economies is possible, and also indicates that there is immense potential that is still unexploited[4].

Wind power is the conversion of wind energy into electricity or mechanical energy using wind turbines. The power in the wind is extracted by allowing it to blow past moving blades that exert torque on a rotor. The amount of power transferred is dependent on the rotor size and the wind speed.
Wind turbines range from small four hundred watt generators for residential use to several megawatt machines for wind farms and offshore. The small ones have direct drive generators, direct current output, aeroelastic blades, lifetime bearings and use a vane to point into the wind; while the larger ones generally have geared power trains, alternating current output, flaps and are actively pointed into the wind.

Direct drive generators and aeroelastic blades for large wind turbines are being researched and direct current generators are sometimes used.
Since wind speed is not constant, the annual energy production of a wind converter is dependent on the capacity factor. A well sited wind generator will have a capacity factor of about 35%. This compares to typical capacity factors of 90% for nuclear plants, 70% for coal plants, and 30% for thermal plants.
As a general rule, wind generators are practical where the average wind speed is 4.5 m/s or greater. Usually sites are pre-selected on the basis of a wind atlas, and validated with on site wind measurements.
Wind energy is plentiful, renewable, widely distributed, clean, and reduces greenhouse gas emissions if used to replace fossil-fuel-derived electricity. The intermittency of wind does not create problems when using wind power at low to moderate penetration levels[5].

Most modern wind power is generated in the form of electricity by converting the rotation of turbine blades into electrical current by means of an electrical generator. In windmills (a much older technology), wind energy is used to turn mechanical machinery to do physical work, such as crushing grain or pumping water [5].

Recently, wind energy has also been used to desalinate water. For further information on use of wind power for water desalination, see Wind Energy - Water Desalination.

In wind electric systems, the rotor is coupled via a gearing or speed control system to a generator, which produces electricity. Wind power is used in large scale wind farms for national electrical grids as well as in small individual turbines for providing electricity to rural residences or grid-isolated locations.
For small turbines the electricity generated can be used to charge batteries or used directly. Larger, more sophisticated wind energy converters are used to feed power into the grid.

Small turbines intended for battery charging have a turbine diameter of between 0.5 –5 m and a power out put of 0.5 – 2 kW. Installed costs vary between US$ 4 – 10 per watt. Medium sized turbines are used in small independent grids in hybrid with a diesel or PV generator. These turbines have diameters of between 5-30 m and a power output of 10- 250 kW. Large wind turbines are normally grid connected. This category includes diameters of 30-90 m and power outputs 0.5 – 3 MW. Total installed global capacity is 58,982 MW of which Europe accounts for 69% (2005).
In the Eastern Africa region experience with wind generators has been isolated and largely driven by donors and missionaries. In Europe wind energy cost was estimated at $55.80/MWh, coal at $53.10/MWh and natural gas at $52.50/MWh.

Wind has been harnessed to lift water for more than 2000 years, first in China and the Middle East, and spreading to Europe. In Africa, settlers historically made use of wind pumps in Namibia and South Africa and to a lesser extent Zimbabwe and Kenya.With wind pumps, moving air turns a "rotor", and the rotational motion of the blades is transferred to harmonic motion of the shaft, which is used to pump water or drive other mechanical devices such as grain mills. Water from wells as deep as 200m can be pumped to the surface by wind pumps.

In off-grid areas where there is sufficient wind (3-5 m/s) and ground water supply, wind pumps often offer a cost-effective method for domestic and community water supply, small-scale irrigation and livestock watering.To select a suitable wind pump, the following information is needed: mean wind speed, total pumping head, daily water requirement, well draw down, water quality and storage requirements. In the Eastern Africa region, there are at least 3 manufacturers with a production of less than 100 units per year. Donors and missionaries have been the main purchasers of both imported and locally manufactured wind pumps [5].

The first commercial wind energy converters entered service back in the 1980s, although the wind energy boom as such did not begin until the mid 1990s, when the total installed wind generation capacity in the world was only 5,000 MW. Since then the installed capacity has increased at double-digit rates of annual growth. By the end of 2006 global installed capacity had reached 74,233 MW. Currently the industry is enjoying a boom with 239,000 MW installed globally as at 2011. Almost without exception, the installed systems are used to generate electricity. The largest market at present is still Europe, where some 48,545 MW (65%) is installed; of this, 22,000 MW is located in Germany (figures from end of 2006). Germany is also a leader among the system manufacturers. Four German companies are counted among the world’s major manufacturers, and the German component industry supplies gearboxes, clutches and other assemblies to numerous producers in other countries.

Even if it remains a matter of dispute whether wind energy would still be competitive without promotional support, it is beyond doubt that the wind industry has made considerable progress. While in the early 1990s the cost of systems still averaged almost 1,300 EUR/kW, in the meantime specific investment costs have fallen to around 900 EUR/kW. The advantages of mass production have been further boosted by considerable increases in the efficiency of turbines (greater hub height, larger rotor diameter etc.), which have improved the economics of wind energy. There are now turbines on the market with a rated output of up to 6 MW, for example. This trend further illustrates that the growth market in the wind industry is mainly seen in electricity generation and grid feed-in.[6]

"The wind energy potential in many developing and emerging countries is substantial. In many locations, generating electricity from wind energy presents an economically viable alternative to the use of conventional fossil energy sources such as coal or diesel. In developing and emerging countries, wind turbines are an alternative to conventional power stations. In comparison to fossil-fueled power stations, wind energy can now be cost-effective in many places, as well as being non-polluting and reducing dependence on imports of fossil fuels."

Advantages of wind can be:

Despite the economic and ecological advantages, so far even good wind resources in developing and emerging countries have not been used to the desirable extent.

The essential reasons for this are based in the lack of knowledge in the developing and emerging countries.

From the view of international wind energy companies, beside the difficulties of raising of capital and risk covering, the barriers for private investment are especially: 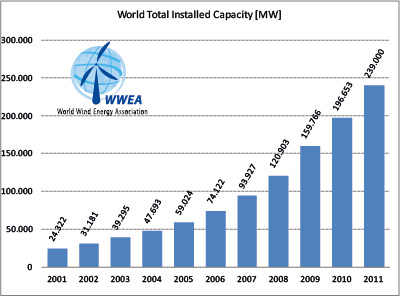 Retrieved from "https://energypedia.info/index.php?title=Wind_Energy_-_Introduction&oldid=272096"
Categories:
Cookies help us deliver our services. By using our services, you agree to our use of cookies.