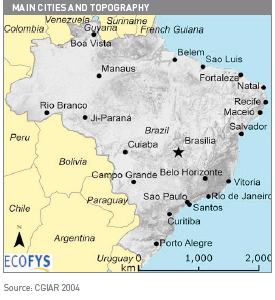 wind potential is estimated to be 143 GW[1]. 1.4 GW have already been contracted under the Programme for Promotion of Alternative Electricity Sources (PROINFA). However, by August 2009 only 414 MW had actually been installed.[2] The Brazilian Wind Energy Centre published in 2001 a Brazilian Wind Atlas. It was used by the National Energy Plan for 2030 (PNE 2030) in its studies on wind energy[3]. The atlas provides information on the wind energy conditions at 50 m height. It covers all areas with wind speeds above 7 m / s. These values are theoretical. For example, the North-eastern potential estimated at 75 GW in the PNE 2030 could be as low as 12 GW according to other credible studies.

The PROINFA is the main programme promoting the use of wind energy (together with biomass and small hydro). With PROINFA ending end of 2009, government has chosen to follow a different path in the future and promote wind energy via dedicated auctions that will be held once or twice a year.

Starting this process, for the first time wind energy will be sold under the regulated system in an auction to take place in November 2009. According to the Brazilian Wind Energy Association, in July 2009 a total of 441 projects were registered to participate in the auction, representing 13 341 MW. It is a huge amount if the actual installed capacity of 359 MW is considered. These projects are located in the South, Southeast and Northeast, the regions with the greatest wind potential in the country. The energy sold in the auction will have to be delivered from July 2012 on, with a duration of up to 20 years.

One strong barrier for a better development of the wind energy market under the PROINFA incentives is that 60 % of the equipment used should come from national industry. It was intended to be an incentive to the industry, but many project developers see it as an obstacle. This question is under discussion and it is expected that for the auction in November 2009 developers will be allowed to import wind energy converters with a rated power larger than 1 500 kW. For smaller turbines, the import limit will still be in place (formerly, the limit was 2 000 kW) which means the tax for imported industrialised products (IPI) of 14 % is applied.

In this respect, also the programme »Luz para Todos«[4] needs to be mentioned, providing subsidies of up to 85 % of direct project cost. Power plants, including wind energy plants, are included in the category of enterprises that have to undergo an environmental licensing process. Law No. 6938 / 1981, which provides the National Policy on Environment (AMPP), establishes standards and sets criteria for the licensing of actual or potentially polluting activities. With regard to grid connection, the concessionaire or the ONS has to offer an entry point to the distribution or transmission network at a convenient knot for the wind park; the wind park owner has to pay for the cable from the park to the entry point (shallow connection costs).

The North-eastern and the Southern regions have the highest potential in the country and most of the projects that are already implemented are located in these two regions. The following table presents a list of all existing wind farms with a total installed capacity of 414 MW. Almost 250 MW are installed in the Northeast, where 25 wind parks are located. 7 wind farms, totalling 167 MW, are located in the South and one 1 MW is installed in the Southeast. According to Aneel[5], at the time of writing 13 new wind plants are being constructed.

Twelve of the wind parks are situated in the North-eastern region (Eight in the State of Ceará and 4 in Pernambuco) and one in the State of Rio de Janeiro. Together they have a capacity of 442 MW. Another 45 plants, totalling 2 300 MW, have already been granted approval but their construction has not started yet. The following table shows the companies who own existing wind farms, indicating their share of the total installed capacity of 414 GW:

The Wind energy industry is already established in the country. The company Wobben Windpower produces, installs and maintains high quality wind turbines. Wobben Windpower is a subsidiary of Enercon GmbH, a world leader in wind energy technology. Therefore, many experts have stated that there is actually no need for importing equipment; however, importation would certainly increase competition. On the other hand, technical experts and skilled workers are still scarce and it is foreseen that the need for maintenance experts will increase with the last execution of PROINFA installations. In this context, the GTZ Energy Programme for Brazil is about to set up an operation and maintenance education and training programme. The Brazilian Development Bank (BNDES) has specific financing programmes for the development of wind farms and has already financed some of them, like those situated in Osório-RS. Except the well-known international financing organizations, there is no real alternative to BNDES.

Retrieved from "https://energypedia.info/index.php?title=Wind_Energy_Country_Analyses_Brazil&oldid=298700"
Categories:
Cookies help us deliver our services. By using our services, you agree to our use of cookies.