Chile has favourable conditions for the development of wind energy, particularly in coastal areas and in some valleys in the interior. In the Northern deserts, average wind speeds of approx. 8m/s (measured at 50m height) are reached. In some parts of the central-southern regions similar wind conditions can be found. Until now, most wind farms are planned there. Detailed exploration of renewable energy potentials in Chile is not yet finalised. When taking into account only those regions and projects identified by the Comisión Nacional de Energia Chile (CNE), the technically and economically feasible wind potential in the country is about 6 000 MW[1] In the SIC, at least three suitable zones have been identified:

In the SING region, preliminary results show an area of 42 km² with a potential of 600 MW and further research is being carried out during 2009. GTZ is supporting a wind measuring campaign on public lands in the north of Chile[2]. An online platform has been developed for public consultation, where information on wind speeds and solar irradiation in specific regions can be obtained, like high resolution wind maps, wind maps for use with Google Earth[3] and detailed reports containing wind speeds, daily wind cycles and distributions of wind direction. Unfortunately the link to the page is currently not working[4]. In the scope of the rural electrification programme, wind measurements in almost all regions in the country are also being carried out and on the programme’s webpage[5] several reports containing wind information for different regions are available.

The development of wind energy projects is supported by the policies and instruments for renewable energies[6]. Wind energy is considered by the law as a non-conventional energy resource, and there are no specific programmes or policies for wind energy alone. To support the development of wind parks connected to the electric systems, the CNE in collaboration with GTZ and the Comisión Nacional del Medio Ambiente - National Environment Commission (CONAMA) has published a guide for the environmental impact assessments of wind energy projects in Chile. According to the Law 19 300 of 1994, wind farms with a capacity above 3 MW have to submit a declaration on environmental impact. If the wind farm has a capacity less than 3 MW but will be located in a national nature reserve or in a protected area, it also has to enter the SEIA. Apart from power plants, also high voltage transmission lines and substations with voltages higher than 23 kV have to conduct an environmental impact assessment. The guide describes procedures for obtaining an environmental license and is available for download at the CNE webpage.[7]

The development of wind parks in the country is still at an early stage. By the end of 2008, two wind parks with a total installed capacity of 20 MW were operational (owned by Endesa Chile and Edelaysen). Until end 2009, further 200 MW will be added. One of the largest is a 69 MW Endesa project. Table 7 gives an overview of all wind projects in Chile that have already applied for environmental approval, including those having already received a permit.

The following table shows the status of environmental impact analysis of wind parks in Chile. Source: CONAMA, SEIA[9]. This project pipeline shows the high growth of interest in this technology and illustrates that market expansion is taking place. According to the Corporación de Fomento de la Producción (Development Agency of Chile (CORFO)), by mid 2009 there were 46 projects under development (1 565 MW) and a further 130 MW under construction, which also includes the projects listed above. 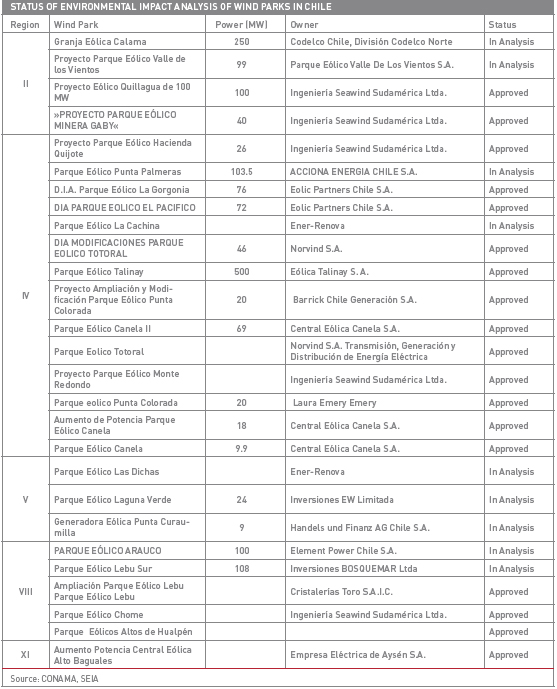 There is still no major (equipment) manufacturer in the country, but the country’s great wind energy potential is attracting major international project developers and investors. Enel Green Power, through its subsidiary Enel Latin America (Chile) Limited, signed an agreement with SoWiTec Energías Renovables de Chile Ltda., a subsidiary of the German SoWiTec-International GmbH to develop seven wind projects in the country, with a total capacity up to 850 MW. Endesa Eco has already commissioned a wind park (Canela I) in the region of Canela, about 300 km north of Santiago. A second windpark, Canela II, is being constructed. In the same region the company Norvind S.A, a joint venture of SN Power, is erecting 23 wind mills rated 2MW each for the wind park Totoral. In Monte Redondo the start of operations of a 38 MW wind park of the company Suez Energy Andino is expected for November 2009.

Retrieved from "https://energypedia.info/index.php?title=Wind_Energy_Country_Analyses_Chile&oldid=298703"
Categories:
Cookies help us deliver our services. By using our services, you agree to our use of cookies.