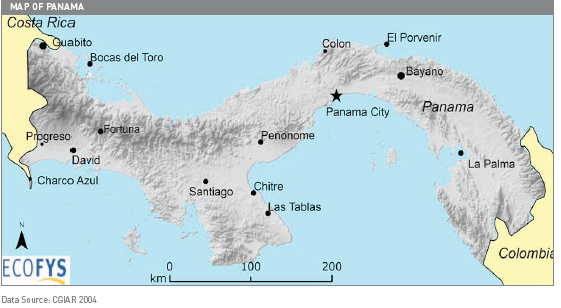 In 2006, the ETESA in collaboration with the UNDP and the company Lahmeyer International elaborated a wind energy resource map of Panama. During the study, measurements were carried out in six locations throughout the country to determine the wind potential.


According to the study of Lahmeyer, wind speed throughout the country ranges between 1 and 6 m/s at the height of 40m. Three sites located in the central mountain chain of Panama present the best conditions for wind park installations with wind speed profiles of average speeds higher than 10 m/s. These locations are Cerro Tute (province of Veraguas), La Miel (province of Los Santos) and Boquete (province of Chiriquí).

There is no particular wind legislation issued in the country at the moment. Regulation of grid access and electricity distribution for wind power plants is governed by the general electric law no 6 of the 3rd September 1997. In terms of support instruments, the provisions of law no. 45 of 3rd September 2004 described in the previous chapter on support schemes for renewable energies apply.

Wind parks are currently planned by the following companies:

The small size of the Panamanian electricity market might limit investment in renewables as the size of the market does not allow the installation of big wind parks in the country (average capacity of current projects is around 100 MW). This situation could change once both the SIEPAC and the interconnection Colombia-Panama are finished as the expansion of the grid capacity and export possibilities would allow installations of large wind parks up to 600 MW. An upgrade of the grid is needed since in Panama, areas with a promising wind potential are at great distance from demand centres and require long and expensive transmission lines to ensure energy supply where it is needed. Moreover, the regulatory market needs to be adjusted to create a favourable framework for the implementation of electricity production from renewable energy sources.
The situation regarding the use of renewable energies, and in particular wind energy, is likely to change from 2009 onwards due to two particular facts. On the one hand, Panama has been the venue of the Wind Expo 2009 (from 2nd to 4th September) fostered by the Latin American Wind Energy Association. This event gives continuity to the first Wind Expo held in Guadalajara (Mexico) in 2008 and aims at defining »successful strategies to integrate wind power in the Latin American Energy Matrix«. In addition, first wind parks will start to be constructed in Panama in 2009, such as the 200 MW wind park developed by Aerogeneradores Cerro Azul and WIND7AG. The successful completion of all planned wind projects in the country would amount to 600 MW of installed wind power capacity for which the planned SIEPAC and interconnection to Columbia is necessary.
Main investments in renewable energies in the country still come from foreign investors (international private companies or multilateral banks). In particular, wind power projects are financed and carried out by foreign companies such as WIND7AG (Germany) or Enrilnews (Spain). Incentives coming from the law no 45 comprise exemption of import taxes for equipment, fostering the use of international technology. However, currently no R&D programmes aiming at the development of national technology exist. The only academic institution which covers the topic of renewable energies is the Technological University of Panama which offers a master in mechanical engineering with majors in renewable energies and environment. The efficient application of the incentive schemes comprised in the law 45 of 2004 and a successful realisation of the wind parks foreseen might generate proper conditions to exploit wind energy within the country. The market conditions could be improved by increasing subsidies and incentive schemes which even could trigger the establishment of a national wind energy industry.

Retrieved from "https://energypedia.info/index.php?title=Wind_Energy_Country_Analyses_Panama&oldid=298718"
Categories:
Cookies help us deliver our services. By using our services, you agree to our use of cookies.