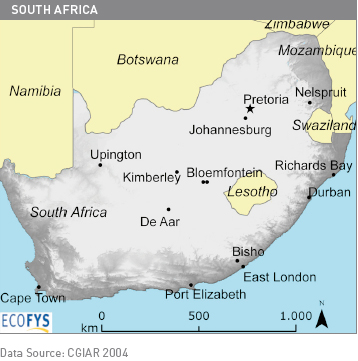 In the past, a few high-level wind resource studies were carried out, e. g. a study by Roseanne Diab in 1995 and the South African Renewable Energy Resource Database (SARERD) compiled by DME / Eskom / CSIR in 2001[1]. All of these studies were based on data from meteorological stations measured at a height of 10 m and (as in the case of SARERD) extrapolated with the help of software programmes to surrounding areas. Hence, the resulting data on the South African wind regime are not very reliable.

Concluding from the studies, the potential for wind energy can be defined as very good, especially in the long coastal strip and inland escarpments. Provinces with the best wind energy potential are Western Cape, Northern Cape, Eastern Cape and KwaZulu-Natal. The estimated average annual wind speed at 10m is 6 m/s[2]. Evaluating and reassessing existing studies in 2003, a South African renewable energy strategy formulation team from the Department of Minerals and Energy estimated the total wind generation potential to be 60 TWh per annum. Adopting a conservative approach to land availability, of the 410 000 km2 exposed to wind speeds of more than 6.5 m.s-1, they assumed that only 1 174 km2 could be allocated to wind farms. Even in these allocated areas, the turbines themselves would only take up about 1 to 2 percent of the land area, equivalent to about 0.003 % of the total resource area, with normal farming continuing under and around the turbines[3].

For the Western Cape Province, the following wind resource category areas where identified, showing a significant land area with excellent wind speeds of more than 8 m/s. Since these early weather station based studies, state-of the art assessments have been undertaken by private companies that are not in public domain.

In order to close this gap, the GEF-financed South African Wind Energy Programme with the help of the Technical University of Denmark (RISØ) embarked on the elaboration of a meso-scale wind atlas based on computer simulations and calibrated by real wind measurements in strategic locations. The project started in November 2008 and will be completed in December 2012. Row data will be published consecutively on a website to be specified; once finalized, the wind atlas will be in public domain. In 2009, GTZ's TERNA Wind Energy Programme in cooperation with the Western Cape Department of Environmental Affairs and Development Planning (DEA&DP) and Eskom carried out a technical study aiming inter alia at analysing the effects of integration of wind energy on the transmission grid. The preliminary results of the study reveal that at least 2 800 MW of wind power can be integrated in the existing transmission grid. With a very good wind regime and sufficient back-up capacity provided by existing gas-fired power plants, this makes the province an excellent location for large-scale wind energy utilization[4].

In the White Paper on renewable energy (2003), the South African government targets 10 000 GWh renewable energy contribution to final energy consumption by 2013. The South African government has planned through the White Paper (2003) to implement 100 MW of wind farms across the country by March 2010[5], to be later expanded to 200 MW, but the utility Eskom has delayed awarding the tender. The government states it plans to have independent power producers supply 400 MW of wind power in the next three years[6] However, these figures are no official, binding targets.

As of now there is no specific permission procedure for wind energy projects, which means guidelines described in chapter on framework conditions for renewable energies apply.

As part of the expansion programme up to 2026, ESKOM introduced a strengthening of the transmission system to meet rising electricity demand. The strengthening of the transmission system into the Cape has been ongoing for some time. Since 2002, work has been done on strengthening the North-of-Hydra part of the system which the lines are coming into the major Hydra Substation at De Aar in central South Africa. Work is currently being undertaken on the South of-Hydra part of the system and the Southern Cape grid. In the main corridor between the Free State and the Western Cape, installations of 400 kV capacitor banks are currently under way. The expected completion date of all this work is mid-2007. Additional activities aimed at reducing losses and increasing transfer capacity is already under way. The next phase will include the Cape project entailing the building of an additional 1 450 km of 765 kV power lines to strengthen the existing system. The line runs from Zeus in Mpumalanga to the new Omega substation in Cape Town and entails an R 6.3 billion investment. In terms of the current schedules, the proposed infrastructure is expected to be in service by 2010. Beyond the immediate transmission infrastructure plans, various options are being considered to further strengthen the transmission grid through the implementation of 765 kV reinforcements and possibly through the introduction of high-voltage direct current (HVDC) into the Cape network. These plans, however, need to be developed in an integrated manner, taking into account possible new generation options for the Cape networks.

Eskom’s other transmission strengthening projects include:

Current use of Wind Energy and Project Pipeline

In 2009, the installed capacity of wind energy accounts for 8.4 MW (end of 2008).[8] South Africa is still at a pilot or demonstration stage and has implemented two projects listed in the following table.

List of wind power projects in operation in South africa.jpg

In 2002, Eskom installed the first 3 wind turbines in the country for demonstration purposes in Klipheuwel near Cape Town.

In June 2000, the Minister of Minerals and Energy supported the declaration of the Darling Wind Farm as a National Demonstration Project: Knowledge, experience and lessons learned through »learning by doing« implementation of the Darling Wind farm will contribute to test and / or inform decisions around replicable new and /or novel approaches to recognise energy and environmental problems and acts as an example for replication to the public. After a range of delays caused by technical and bureaucratic problems, the Darling wind farm became operational end of 2007 as the first wind IPP of the continent. Plans exist to expand the wind farm to 13 MW and beyond.

After this rather slow uptake of wind energy, interest of national and international project developers has increased significantly in the last two years. After the publication of the REFIT guidelines by NERSA, this culminated in a »wind rush« leading to grid connection applications with a total amount of 3 800 MW solely in the Western Cape Province and with estimated 5 400 MW in the entire country ( July 2009 data). Areas with major project development activities are shown in the figure below: 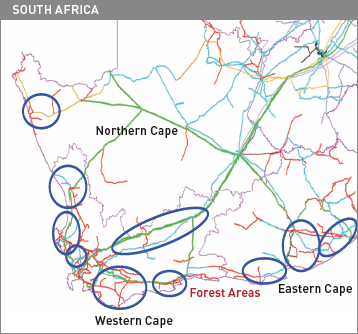 Amongst the »wind seekers« there are also few experienced local and international project developers active in the country, see section »Private sector development« below.

So far, a missing coherent framework and cheap electricity prices and a lack of support instruments prevented project development. This is going to change however with the implementation of the REFIT that provides higher incentives for wind energy than the German EEG (Renewable Energy Act).

Due to the high level of the mechanical engineering industry, South Africa has in principle the capability to manufacture almost all of the components of a wind power plant. Therefore, South Africa hopes to make a breakthrough in the technological development of wind energy.

The most important local manufacturers are:

Proof of existing component manufacturing capacity is the fact that the towers for the two wind power projects in Klipheuwel and Darling were manufactured locally.

The experimental wind farm at Klipheuwel (2002) on the West Coast near Cape Town is owned by Eskom’s Resources and Strategy Division. Construction and ongoing research is managed on their behalf by Eskom Enterprises TSI (Technology Services International). ESKOM’s Generation Division was operating and maintaining the turbines during the three year research phase. This demonstration project had the objective to train local employees.

Financing possibilities exist to develop wind power projects in South Africa. For instance, the Renewable Energy Finance and Subsidy Office (REFSO) manages renewable energy subsidies (see chapter on framework conditions for renewable energies ).82 Moreover, there are possibilities for foreign companies to develop joint venture with South African wind farm developers in order to build wind farm power plants such as the Irish company Mainstream Renewable Power. Financing possibilities also exist via the Energy Development Corporation (EDC) of the Central Energy Fund (see chapter on market actors) and via the Development Bank of Southern Africa (DBSA). Development grants for the initial stages of a project are available via the Renewable Energy Market Transformation Project (REMT) described in chapter on market actors and via the Industrial Development Corporation (IDC), The IDC is a self-financing, national development finance institution with the aim to promote entrepreneurship through the building of competitive industries and enterprises based on sound business principles. Although not traditionally an area of focus, IDC is starting to take a much greater interest in the energy sector. In addition, South African private banks (e. g. Investec, Macquarie) are seriously considering to become active in the wind energy market.

Constraints exist because of uncertainties regarding the concrete implementation of the REFIT. This refers for example to the issue of who has to pay for the grid-connection costs and whether a certain capacity limit will be introduced that would set a cap on the amount of MW eligible for the proposed tariffs, which inter alia would also entail long and costly pre-qualification procedures. Furthermore, concrete and consistent guidelines for the whole permitting process are missing, creating again uncertainties among project developers and investors.

Retrieved from "https://energypedia.info/index.php?title=Wind_Energy_Country_Analyses_South_Africa&oldid=298717"
Categories:
Cookies help us deliver our services. By using our services, you agree to our use of cookies.