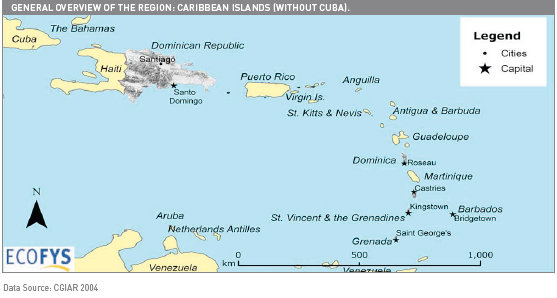 
If the additional areas with moderate wind resource potential (or good for rural power applications) are considered, the estimated area increases to more than 4 400 km²,or slightly more than 9 % of the entire Dominican Republic. This wind corridor regions could potentially support more than 30 000 MW of installed capacity and deliver over 60 billion kWh per year. There are 12 provinces with at least 1 000 MW of wind potential, and all except for tree provinces have at least 100 MW of wind potential. However, additional studies are required to more accurately assess the wind power potential, considering factors such as the existing transmission grid and accessibility.

The Barbados Light & Power Company Ltd (BL&P) has a project to introduce wind energy into the electricity mix and is still awaiting a decision on its application to the Town & Country Development Planning Office to construct a 10 MW wind farm at Lamberts, St. Lucy (where in the beginning of the 1980’s an experimental wind turbine was built).


The project is being developed with the assistance of Caribbean Renewable Energy Development Programme (CREDP) of the German Technical Cooperation (GTZ). Indeed, the administrative processes in the Town & Country Development Planning Office (in this case, the environmental impact assessment was delivered in the beginning of 2007) may be an obstacle for investors, since projects may be delayed or halted completely.

The first wind turbine in Dominica was installed in 2008. It is a class I Norwin (225 kW) and is located in the Rosalia Nature Resort with the aim to offset the high electricity costs from the Dominica Electricity Services Ltd. (DOMLEC). It is expected that the installation generates 596 GWh of electricity annually. Since 2006 DOMLEC has been in the process of looking for locations and gathering anemometric data, which should enable implementation of small wind farms in the capacity range of 5 to 8 MW.


Since 2003 GTZ/CREDP has been developing a series of activities on wind energy on the island. Between 2003 and 2004 a review of the existing wind site studies has been carried out. In 2004, GTZ conducted a wind energy assessment for Government. This study covered nine sites on the southeast coast and five sites in the northeast The reports stated that the northeast coasts of Dominica present the best opportunities for large scale development of wind energy. The report also stated, however, that the weakness of the electricity distribution system did not currently allow for large injections of power along the east and northeast coasts. GTZ/CERDP has also invested in capacity building, by sponsoring the participation of key persons in wind energy events in Germany and assisted DOMLEC in its site identification and wind measurement activities.


According to the Comisión Nacional de Energía (CNE), the potential for grid connected wind power is 10 000 MW, plus approx. 30 000 MW offgrid for self consumption.

Grenada Electricity Services Ltd.(GRENLEC) is currently working on land control and enhancing the wind resource assessment programme, which includes five potential wind sites on Grenada. On Carriacou, the company is analyzing data and approaching the government for potential wind farm sites on Crown Land. The goal is to install a 1 MW system. Similar work is underway for Petite Martinique. During 2008 GRENLEC continued negotiations with two land owners to finalize the lease of sites which are considered suitable to install two wind farms. Negotiations are still in progress for the long term lease of both sites. Meanwhile, the owners have given GRENLEC permission to install wind loggers and commence measurements. According to the company the data looks promising with wind speed at both sites averaging approximately 7.6 m/s. In March 2007 the Paradise Bay Resort installed an 80 kW wind turbine with an expected annual yield of 180 000 kWh. It is the first utility-grade wind turbine installed in Caricom. The electrical surplus will be sold to GRENLEC, when connected to the grid.

The expansion plans of Saint Lucia Electricity Services Limited (LUCELEC) for 2009 included the acquisition of land in the south eastern part of the island and the compilation of wind data for the development of a 12 MW wind farm. In the beginning of 2009 LUCELEC has obtained preliminary access to this property, after many years of negotiations. Data collection activities for this specific region were planned to start in the third quarter of 2009.

St.Vincent and the Grenadines

In 2005 a study with support from GTZ to identify the wind potential in St Vincent analysed several sites: Brighton, Greggs and Ribish Point, which revealed to be the most promising. In June 2008, the Government agreed to build a 6 to 8 MW wind farm and by the end of the year the decision was to install it at Ribishi Point, southern St. Vincent Island. The wind park is expected to produce 12 410 MWh per year at an average wind speed of 8.4 m/s, at 55m height[4]. The estimated investment cost of the project is about 4.9 million € and the estimated specific generation cost is 0.05 €/kWh.

A complete overview of on-going and planned wind energy projects (2011) in the Caribbean due to the Caribbean Renewable Energy Devlopment Programm (CREDP).

Taken from the summary of the CARWEI study:

In July 2009 the CNE announced the collaboration between Dominican Republic and the United Arab Emirates for the construction of 600 MW of wind power on the island (together in a project that includes the construction of a 600 MW natural gas power plant). It is expected that 500 million € is to be invested. Six new wind parks are planned to be installed: two in Puerto Plata, two in Montecristi and two in Azua. Wind turbines currently operating in the country are located only at auto producer plants, attending their own demands.44 Nevertheless, a total of 33 projects have their concession granted in recent years, representing a total of 1 905 MW to be installed in the country. The following table shows all wind projects with concessions in the country. 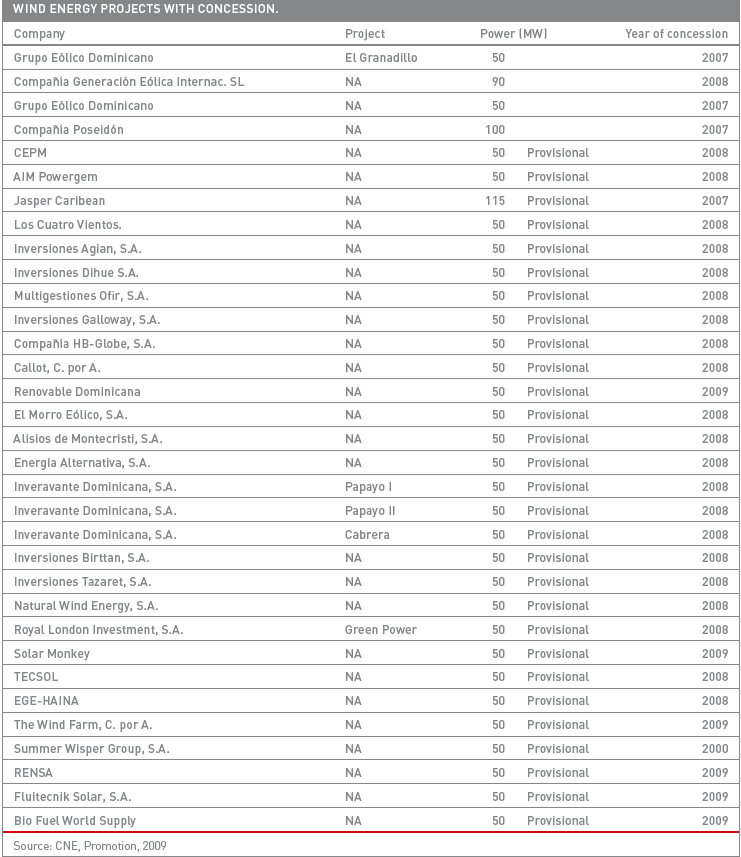 Wind energy projects with concession in the carribean.jpg

Retrieved from "https://energypedia.info/index.php?title=Wind_Energy_Country_Analyses_for_the_Caribbean&oldid=298715"
Categories:
Cookies help us deliver our services. By using our services, you agree to our use of cookies.