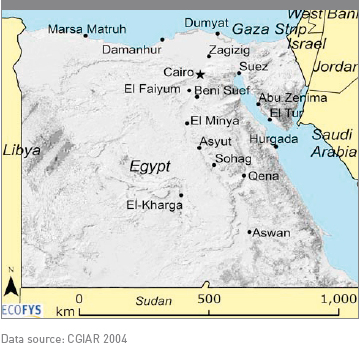 Egypt has outstanding wind energy conditions. Particularly in the coastal regions, high and stable wind speeds are frequent (up to an average of 10.5 m/s in the Gulf of Suez). Furthermore, the country’s large deserts and abundant thinly populated areas are well suited for the construction of large wind farms.

A detailed wind atlas has been compiled between 1998 and 2005 in a joint effort by the New and Renewable Energy Authority (NREA), the Egyptian Meteorological Authority (EMA) and the Danish UNEP research centre Risø. The purpose of the project was to establish a solid meteorological basis for evaluating the country’s wind resources. In addition to data records, the atlas also surveys the Egyptian wind conditions on the basis of wind models and offers detailed, meteorologically based information on site requirements for mediumsized and large wind farms. The Wind Atlas covers the entire country. However, particular attention was given to six promising areas: the Northwest Coast, the Northeast Coast, the Gulf of Aqaba, the Gulf of Suez, the Red Sea and the Western Desert. It is considered a reliable source of information and is used as the basis for all governmental decisions related to wind energy project planning and feasibility studies.

A map of average wind speeds can be found in a study by Mortensen et al[1]. For further information a wind atlas has been published by members of the Wind Energy Division at Risø DTU in Roskilde.

A special wind atlas[2] for the Gulf of Suez was completed in 2003. The assessment determined an overall potential capacity of 20 000 MW for wind power projects in the uninhabited desert regions to the west of the Gulf. A further brief study evaluated the meteorological data gathered from ten weather stations situated along the Mediterranean coast[3]. Three locations – Sidi Barrani, Mersa Matruh and El Dabaa – were founded to also exhibit suitable characteristics for the installation of wind turbines. The atlas further indicates that large regions of the eastern and western deserts of the Nile River and parts of Sinai are much higher then hitherto assumed.

Within the scope of the Renewable Energy Strategy, 12 % of total electricity supply by 2020 are to be generated by wind power, translating into more than 7 200 MW of gridconnected wind farms. In order to reach these targets, in February 2008 the Egyptian Supreme Council of Energy approved a plan to build 600 MW installed wind capacity per year during the next 12 years, totalling 7 200 MW in 2020. The private sector is targeted to play a key role in achieving the 2020 goal. The government anticipates that about 400 MW/year will be developed by the private sector, while the NREA will carry out about 200 MW/year. Energy intensive industries are especially encouraged to build and invest in wind warms in order to satisfy their own electricity needs or to sell electricity to consumers via the national grid. The NREA made its first call for proposals in June 2009 (prequalification round). In order to meet the target laid down in the strategy, the government called for 250 MW of wind power this year, to be build on a build-own-operate basis (BOOT) by private actors.

Egypt has passed the stage of initial resource assessment and demonstration projects (Hurghada wind farm) towards the planning and implementation of large scale grid connected projects (Zafarana and Gulf of El Zayt). A series of large-scale wind energy projects have been built in Egypt, resulting in a total installed wind capacity of 390 MW at the end of 2008.

So far, large scale wind projects were established mainly at Zafarana, with a total capacity of 360 MW by end of 2008. In cooperation with Germany, Denmark and Spain, the farm has been constructed and operated in stages since 2001. A partnership with Japan in 2008 added 55 MW. In the fiscal year 2007/2008, approximately 840 GWh of electricity were generated by the Zafarana wind farm with an average capacity factor of 35.5 %, saving 466 000 tons of CO2.

NREA has precise plans for wind farm development at the two sites Zafarana and Gulf of El-Zayt. While at Zafarana a capacity of 600 MW on 150 km2 is planned, total capacity at El-Zayt will reach 720 MW on 200 km2. Between both areas, 1 300 km2 have been designated to private investors, which are supposed to generate up to further 6 000 MW.

Projections for Zafarana between 2009 and 2010 include additional 75 MW in co-operation with Japan, and additional 120 MW in cooperation with Denmark. In total, Zafarana will host 555 MW of grid connected wind power, rendering it the largest wind farm in Middle East and Africa.

In addition, a number of private companies have expressed interest in developing large-scale wind projects at the Gulf of El Zayt. Among them, the Italian company Italcementi signed a MoU with the Egyptian government in 2006 to install 120 MW with the possibility for extension to up to 400 MW. The output is supposed to partly generate electricity for auto-consumption in the cement factories in the Suez area[6].

On 2 August 2009, authorities have approved the designation of 1.5 million acres of state-owned land, located on the east and west of the Nile River for the implementation of wind farms, which are supposed to contribute 30 000 MW[7]. One-third of this land will be developed for wind energy production by NREA and multinational organisations, whereas two-thirds will be offered to the private sector by bid-procedure.

In general, the present conditions for the wind energy sector in Egypt are favourable. Recent analysis from the World Economic Forum and the World Bank indicates that in spite of the global economic crisis, the country competitiveness is increasing and provides favourable conditions for private companies to set up business operations. Measures to remove existing barriers in the electricity sector are being implemented. However, a number of barriers associated to electricity prices and the availability of skilled personnel still remain.

The impact of the global economic crisis on the Egyptian economy has been relative low and in spite of the low growth dynamic, there are no signs of an economic slump.

Measures to cop with the global crisis will positively influence the availability of proper infrastructure for wind electricity transmission and distribution, one of the barriers for the expansion of the sector so far. The government plans to invest around 100 to 120 million $ in the expansion of high voltage grid from Gulf of Suez to Cairo. On the other hand, the impact of the global crisis may also interfere with the efforts of the Egyptian government to deal with the non competitive prices of renewable electricity (see Chapter 1.5). For example, the government has frozen the industry electricity prices until the end of 2009 as a measure to stimulate the economy[8].

Within the framework of the energy liberalization process (see Chapter 1.4), and in part as a response to the global crisis, the government strives a greater involvement of the private sector in public projects as well as to intensify private investment.

European companies such as Gamesa, have provided so far, most of the wind turbines to the projects at Zafarana. In total, the NREA has ordered 405 MW wind turbines from the Spanish company. Recently, Gamesa won an international tender, a 279 million € contract to supply NREA 284 wind turbines with a total capacity of 241 MW. Gamesa delivers turnkey products while the civil and electrical engineering, together with tower manufacturing is contracted locally.

NREA encourages local manufacturing of turbines and other components based on e.g. technology transfer or joint ventures. Previous experience has been gained with small-scale manufacturing of wind turbine components. As of 2005, also repairs and rewinding of generators have been carried out by local companies. The global cable and electric products manufacturer El Sewedy Cables is supposed to start producing turbine towers locally (at Ain El Sokhna) this year in a 50 – 50 joint venture (called SET) with German tower manufacturer SIAG Schaaf Industrie AG. The facility is part of El Sewedy's broader strategy to set up a fully fledged wind farm supplier that assembles and manufactures wind turbines in Egypt. In 2008, the company bought a 30 % stake in M Torres Olvega, a small Spanish company producing direct-drive wind turbines for 40 million €, including an option to buy the remaining 70 % by March 2011. The company expects to roll out 111 units in 2010 and 256 in 2012 respectively. In the first year, a production of 50 turbines (83 MW) is planed, 225 (435 MW) turbines will be produced in the following four years.

Conditions for private sector to access the wind energy market are favourable and will probably be improved in the near future. As shown in Chapters 1.4 and 1.5, there is a package of instruments in the new electricity law that aim to facilitate the access to the markets. This will support the goal of meeting 87 % and 73 % of the renewable electricity target in the years 2010 and 2010 through private financed projects. Previous experiences, for instance in the gas sector, have been in general positive. The Egyptian government has demonstrated to be a credible partner. So far, one private company has expressed its interest in developing wind energy projects (see Current Use of Wind Energy and Project Pipeline). The tender process is currently taking place[9]. Independently of the crisis, a remaining obstacle for the development of the wind electricity sector is the availability of skilled workers, which is influenced by two main factors: the lack of specialized study programs and the emigration of well qualified personnel.[10] In general, Egyptian universities and educational institutions do not offer programs that suit the needs of the wind sector, such as advanced studies in mechanical and electrical engineering. Although, there are some initiatives, supported for instance by the GTZ and the Federal Ministry for Economic Cooperation and Development (BMZ), to reform curricula, the process to adapt them is rather slow compared to the fast development in the wind sector. As for the emigration, well qualified Egyptian engineers and technicians usually prefer to work abroad, especially in the Middle East, where loans and economic benefits are substantially better than in Egypt. This may become particularly critical for NREA, since its loans are rather low compared to the private sector.

Retrieved from "https://energypedia.info/index.php?title=Wind_Energy_Country_Analysis_Egypt&oldid=298712"
Categories:
Cookies help us deliver our services. By using our services, you agree to our use of cookies.