Lack of energy access continues to be a pervasive issue in many countries. A contributing factor to this is the unaffordability of grid electricity. Many countries have yet to achieve 100% electrification of their population, with electrification rates as low as 31.1% in Cambodia, to 6.4% in Niger.[1] 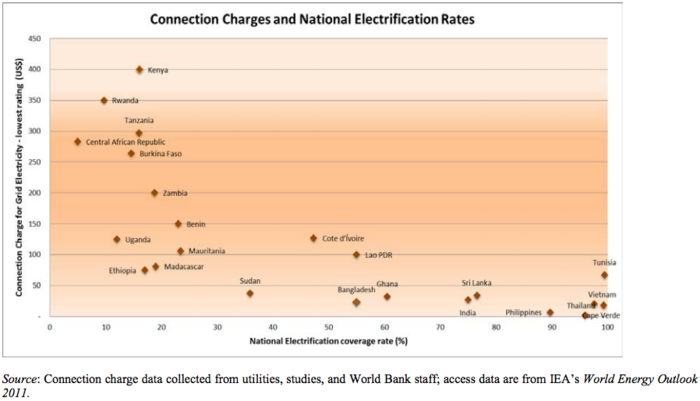 Figure 1: Relationship between connection charges and electrification (Golumbeanu and Barnes, 2013)[2]

In Asia, the Philippines has among the highest residential electricity tariffs[5] due to a lack of government subsidies. This has limited the access to the commodity from lower-income households. As revealed by several studies, it is the poor who are more likely to have no access to power, consequently remaining in poverty due to being unconnected.[4] Affordable access to electricity is necessary in order to ensure economic growth. As such, electrification is seen as a way to encourage “pro-poor growth”[6].

Making electricity affordable may involve many different actions: policy changes, system optimization, and subsidies among others. The World Bank defines affordable electricity as 30 kWh of electricity that costs no more than 5% of a household’s income[7]. This amount would be easily covered by subsidies. Estimates show that in Africa, this cost should not exceed 6% of utilities’ current income. For 19 countries, this would cost less than $5 million in annual subsidies and can be as low as $1 million for majority for the same countries. However, this excludes rural communities and assumes these will be served by off-grid setups. Off-grid electricity production can come in many forms, therefore its costs are more difficult to quantify.

Many countries remain unable to offer grid connection at low cost. As shown in figure 2, where the density of demand is rather low, the cost of connecting to the grid is high.[8] This supports the notion that grid expansion in sparsely populated communities is expensive, and therefore less profitable. Rural households have to pay higher prices to become connected. 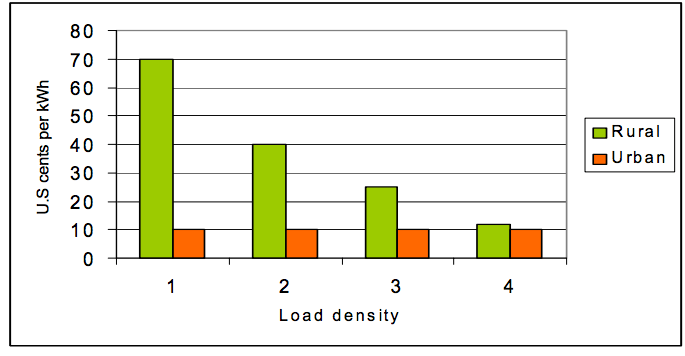 The data in figure 2 shows the negative correlation between load density and grid-connection charges. These charges are so high that it is common for two African households to share one meter. In Ethiopia, the minimum charge available comes as 130% of the average monthly income of a household. Tariff structures are largely affordable for many users, but the high connection charges mean households have to share meters. As a result, grid-connected households outnumber meters 2 to 1. However, sharing a meter can also prove to bring disadvantages, as the raised consumption can place the meter on a higher tariff bracket due to increasing block tariffs[7], thus effectively making the electricity, used by the households, more expensive.

Even when connected, the 33% of Africans who do have access to electricity suffer from highly interruptible supply. Some countries offer lifeline rates as an alternative, which essentially allow discounted electricity usage to a certain amount, then start charging use. Whilst this mechanism widens electrification reach, when coupled with increasing block tariffs, this can stifle positive activities such as studying and/or limit income-generating activities. This does little to help low-income households to escape poverty.

In the study “Making power affordable for Africa and viable for its utilities” (2016), the World Bank suggests several solutions that address the problems of consumers:[7]

Trends in status of financial viability in Sub-Saharan Africa (SSA):[9]

Retrieved from "https://energypedia.info/index.php?title=Affordability_of_Grid_Electricity&oldid=272222"
Categories:
Cookies help us deliver our services. By using our services, you agree to our use of cookies.