What is rural electrification? This definition appears simple but it is becoming more and more complicated as new devices and systems are developed that provide various levels of electricity service.[1]

With the exception of flashlights, historically the main source of electricity has come from national or local grid systems. National grid systems are fairly well know. Local or isolated grid systems are generally based on either microhydro or diesel generators, and the distribution system does not extend beyond a local area such as a town or group of towns.

Then along came the first generation of household offgrid technologies such as solar home systems that were developed and marketed to consumers. These systems involve photovoltaic panel or panels coupled with a battery for a single home. Recently this has been followed by new small household lighting systems. Often unrecognized, for many years rural people have used car or motorcycle batteries for basic television and household lighting.

Today there are even some new developments such as thermo-electric devices that can turn heat into small amounts of electricity when attached to household cooking stoves. These technologies are still in the early stages of marketing and development. Amid this wide variety of new systems and devices, the cost and level of service is quite different among these various types of systems. As you move from those that already have grid service to offgrid technologies, the cost increases per kilowatt hour and the service decreases.

In such situations offgrid technologies often are less expensive than the grid in remote areas or for specialized uses. Below find a brief description of typical service levels and the main benefits that can be supported by them (see table[2]). 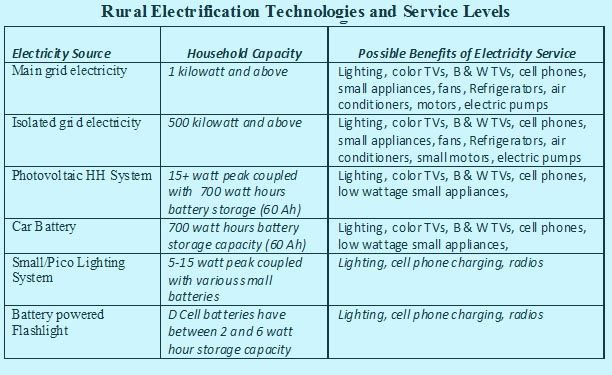 The development impact might be the most important determinant on how to classify households. Unfortunately, at the present time there are very few studies that have been done on the impact of solar home systems or small lighting systems on development. It is well known that certain activities cannot be accomplished with the low power levels available through solar home or smaller photovoltaic systems. The question is does this matter, since such technologies are quite capable of providing household lighting along with radio or television. Should households with these low levels of electricity service be considered as having electricity by large development organizations? Or should technologies for such households be considered as “pre-electrification?”

The main international institutions that are charged with collecting rural electrification statistics typically classify households no access to grid electricity as being “without electricity,” even though the same households may have electricity from other sources such as car batteries or flashlights. The one exception is the recent WHO study that bases the electrification status on whether or not a household lights with electricity. However, even this study makes extensive use of figures the International Energy Agency which adopts a definition that is mainly based on having electricity from a grid system.

Retrieved from "https://energypedia.info/index.php?title=Rural_Electrification&oldid=288089"
Categories:
Cookies help us deliver our services. By using our services, you agree to our use of cookies.