Stoves fueled with alcohol (ethanol and methanol) are not widely used in households. They are mainly used in areas where such stoves and fuels have been fostered and promoted by studies and projects.

A stove to burn alcohol fuels can be very simple. It can be made relatively cheaply in countries with industries producing articles such as aluminium pots, etc.

The main components of the burner are shown here[1]: 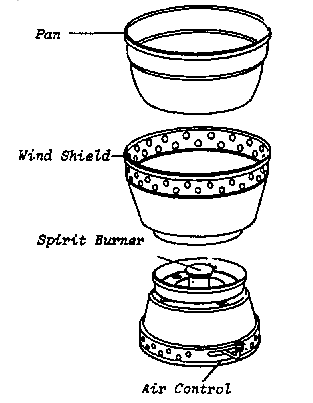 Alcohol stoves have a very clean combustion, emit no soot and negligible emissions. Cooking is very fast as heat is available instantly after ignition of the fuel.

For further advantages and disadvantes of alcohol as a fuel see also the article onCooking with Ethanol and Methanol.

Experiences of Cooking with Ethanol Stoves

One of the pioneering efforts in use of low concentration ethanol for cooking and lighting [2][3] was done in early 2000s by Nimbkar Agricultural Research Institute[4] in India.


The most documented ethanol stove model is the CleanCook Stove by CleanCook Sweden AB, which is produced in South Africa and promoted mainly by Project Gaia.


The "CleanCook" Stove is available as a single or double-burner model for households and institutions. It is made from aluminium or stainless steel. The CleanCook is a non-pressurized alcohol stove with a refillable fuel canister of a capacity of 1,2 liters.[5] The canister contains a porous fiber that adsorbs alcohol and retains it in a manner that prevents spills, leaks, fires and explosions.[6] The power output per burner is rated at 1.8 kW at maximum heat, allowing for a cooking time of 4-5 hours. It can burn ethanol and methanol.[5] 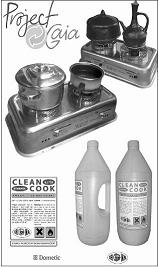 Project Gaia and its Ethiopian sister organization, Gaia Association, have lab and field tested alcohol stoves since 2005. To date, alcohol stoves have been used by households in Ethiopia, Nigeria, South Africa, Malawi, Madagascar, Mozambique, Vietnam, Brazil and Haiti. Click here to access country study/project reports. The largest number of households using alcohol stoves is in the UNHCR refugee camps near Jijiga, Eastern Ethiopia where more than 4,000 households rely on the CleanCook stove and ethanol fuel as their main source of energy. The UNHCR now aims to scale up to provide ethanol cookstoves and fuel to up to 27,678 households by 2017.[8]

They are developed by the Norwegian research & design company Abry & Kavanagh Design AS, and have been manufactured under license in China since 2014. Up until 2019, over 55,000 stoves have been distributed under the Safi brand in Kenya, Tanzania and Madagascar through their partners. SeTAR in South Africa and KEBS in Kenya tested them. The stoves are approved for Green Development’s Carbon Credit program in Madagascar authorized by the World Bank, and field tested by UNCHR in the Dadaab refugee camp in Kenya. In addition, Green Development have in partnership with Samsung Electronics, delivered over 20,000 SAFI branded stoves in Kenya.[10]

Retrieved from "https://energypedia.info/index.php?title=Alcohol_Stoves&oldid=313738"
Categories:
Cookies help us deliver our services. By using our services, you agree to our use of cookies.