Cooking with Ethanol and Methanol

Ethanol and methanol are alcohol fuels which can be distilled from a wide variety of biomass feedstock. Therefore they are a renewable cooking energy alternative, which are highly convenient to use. The use of ethanol and methanol requires the establishment of a production and supply chain, which very much influences the price of the fuel.

Ethanol (Ethyl Alcohol - C2H5OH) is a clear liquid that can be distilled from starch which first has to be converted into sugar, or sugar-containing biomass feedstock. Bio-ethanol feedstock can be categorized into three major groups:

Sugar cane and molasses are the most common and economical sources of ethanol. By using biocatalysts, (micro-organisms including yeast and bacteria), starch or sugar rich plants are fermented to produce ethanol in a relatively dilute aqueous solution (e.g. beer, wine)[1]. Efficient micro-scale distilleries have the capacity to produce from 150 to 5,000 liters ethanol per day[2].

Ethanol burns with a slow, steady and only slightly visible flame. Ethanol should be stored in closed containers and bottles, mainly due to the combustible nature of the ethanol vapour-air mix at certain concentrations, but also due to the possibility of evaporation. Within the household, care must be taken to fully extinguish the flame when filling ethanol stoves, as the flame is very difficult to see[3]. 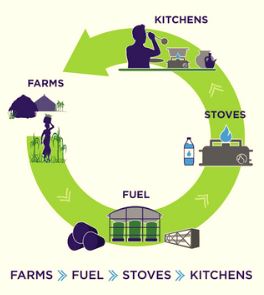 Ethanol gel is commonly known as gel fuel and is made from ethanol combined with a thickening agent to make it viscous and easier to handle as a fuel. However, the viscous nature of gel fuel causes it to stick to most surfaces, including clothing and skin. Traditional methods of extinguishing these fires such as stop, drop and roll, will not extinguish such fires. Instead, a dry chemical extinguisher or baking soda is needed to extinguish the flames[4]. The quoted gross calorific value of gel fuel by manufacturers is 22.8 MJ/kg[3]. A major advantage of gel fuel is that it can be distributed in a simple pot without the risk of spilling it. However, this characteristic makes it difficult to control the temperature of the stove accurately, therefore small amounts of colouring and denaturing agents are added to enhance the visibility of the flame and to avoid consumption of the gel fuel respectively. The fuel is generally sold in canisters onto which the burner is set, making it easy to use.

Although ethanol and ethanol based gel fuels can offer a clean and efficient fuel source for households, it might be difficult to set-up a reliable supply chain for ethanol and gel fuel and to encourage rural households, which rely upon cheap or free gathered fuelwood for cooking to switch to using ethanol as cooking fuel[5].

Advantages and Disadvantages Cooking with Ethanol

The following advantages can be considered when using of ethanol fuel for cooking[6]:

Alcohol fuels are increasingly recognized by the international community as a clean liquid fuel solution of the future. Ethanol and ethanol-based gel-fuel are quite common in niche applications, where clean combustion, safety and convenience are required: e.g. marine markets, camping, catering services and restaurants. Because ethanol can be made from a variety of low-cost, simple feedstocks, it is an intrinsically cheap fuel. Ethanol fuel can be produced at a scale which suits the community in demand. For example, in Ethiopia ethanol is sourced from the government-owned Sugar Corporation to meet the cooking demand of several thousand households and ethanol for household energy use is recognised as an official priority of the National Biofuels Policy[8]. In humanitarian interventions where energy for cooking is in large and urgent demand and resources are extremely scarce, ethanol stoves and fuel have proven successful[9].

Methanol-use for cooking is still in its infancy, partially due to the fear of the potentially damaging health effects should the fuel be accidentally ingested. Methanol is primarily made from natural gas, but also can be produced from wood, bagasse, grass, or agricultural wastes. If methanol is burned with air in an open flame it burns without any by-products.

Retrieved from "https://energypedia.info/index.php?title=Cooking_with_Ethanol_and_Methanol&oldid=309740"
Categories:
Cookies help us deliver our services. By using our services, you agree to our use of cookies.