A household´s fuel choice is strongly influenced by the accessibility, affordability and convenience of the fuel, as well as dependent on the economic and technical options of a household and the respective social and cultural determination.[1] For example, in many households, cooking with woodfuels is so deeply rooted in culture that other fuels have little appeal, although they might provide recognizable health and economic benefits. The table shows the different aspects that influence the household´s fuel choice. These aspects have to be carefully investigated during the planning phase of a household energy project and constantly observed during the project implementation.

The next figure provides an overview of cooking fuels. Solid fuels are comprised of fossil fuels and solid biomass, such as coal. The solid biomass fuels can be differentiated into unprocessed fuels such as wood, agricultural residues and dung, with processed fuels further categorized into carbonized  and un-carbonized fuels. Liquid fuels include kerosene, methanol, ethanol and plant oil, whilst renewable gaseous fuels consist of woodgas and biogas. The fossil gaseous fuels are comprised of petroleum gas (LPG) and natural gas. 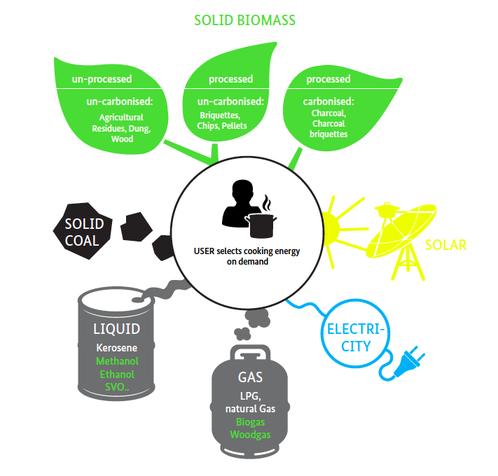 Observations have shown that households prefer to use fuels such as LPG, to increase their cooking options. Thus users increase their options using several choices, using several fuels concurrently. The parallel use of several fuels is also referred to as ‘fuel stacking’ or “energy shelf”, which appears to be a common household fuel choice decision. In terms of energy security, fuel stacking offers households a coping strategy with market price fluctuations and unreliable supply, for example a likely phenomenon for LPG. Additionally, various fuels are often used for certain cooking purposes, such as frying, stirring or simmering, within a household. Following the argumentation of fuel stacking, the aspect of “modern” refers to the processing procedure and related technology that make a fuel “modern” from the perspective of energy efficiency, convenience, health benefits and environmental impacts. Therefore, the “energy ladder hypothesis”, which assumes a linkage between the household income level and fuel choice, is obsolete, as the differentiation between “modern” and “traditional”[2] fuels does not reflect the household’s fuel choice.

Retrieved from "https://energypedia.info/index.php?title=Cooking_Fuels&oldid=351700"
Categories:
Cookies help us deliver our services. By using our services, you agree to our use of cookies.