There is no blueprint for the planning of an improved cooking stoves (ICS) intervention. Even after more than 30 years of GIZ cooking energy promotion, the concepts of ICS intervention to date still vary from country to country. This is mainly due to the fact that the cooking energy systems often look different.


While the answers are always circumstantial and specific, there are general important questions which need to be answered in any ICS planning process. These questions are sorted by important aspects of the content of planning (location, ICS market, technology, production system, partners, service providers etc.). It is recommended to consider these questions in the inception study and the preparation of the inception workshop.

The selection of the project location or the geographic area in which the intervention will be implemented is often not only determined by technical considerations.

In some cases, there is already a positive pre-selection to be considered:

In other cases, the choice of location is limited by factors of exclusion:

The potential impact on the implementation is structured by the following categories:

In the inception study, the factors listed in the table should be investigated and analyzed. Not all of them will be relevant in all cases. The potential impact on the selection and the impact on the implementation are just examples from field practice. They do not preempt the case study which may deliver other results. They shall rather illustrate the kind of consideration to be made when selecting an intervention area.

The potential ICS markets can be ranked in various dimensions:

Based on these criteria, the potential ICS markets can be compared and prioritized. However, it needs to be verified if the “best market” is also relevant from the perspective of the underlying development goals (see frame conditions for planning cooking energy interventions).

A small market may be easy and efficient to penetrate. However, this may not be a very effective approach as that market might not be too small or irrelevant for the development of the country.

For the selection of the potential ICS market it is important to learn more about the targeted market segments and the potential producers. Assessing market opportunities is not easy and it is worthwhile to get assistance from an economist or marketing specialist to develop the business case. See also commercialisation of improved stoves.

Some important questions are listed below:

The different business cases should be discussed and ranked in the process of the inception workshop or at a later stage of the stakeholder consultation process.

Worldwide, a wide range of improved cook stoves exist. They differ in many aspects:

All these differences influence the perception of the “convenience of use” by potential user groups. 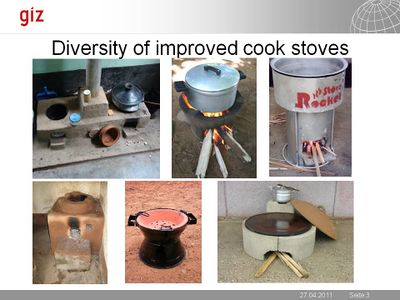 -> An overview on ICS examples is given here: cooking energy technologies and practices.

There is no standard procedure to identify which technology might be most successful on the market. On the one hand it has often been observed that “evolution” of existing baseline technologies is more acceptable and feasible than “revolution” (e.g. bringing in a completely new stove and fuel concept). On the other hand, the establishment of a commercial supply chain might be more feasible with a “modern/strange” product (e.g. a portable metal stove) rather than with a modification of an existing self-help product (e.g. an improve mud stove), if there is already a long tradition of local non-cash stove building. 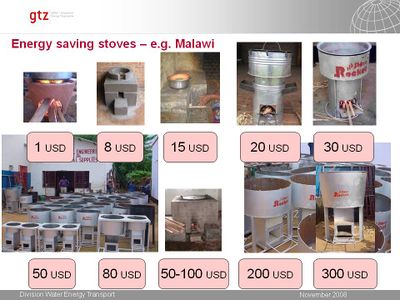 Many interventions resorted to offering a range of stoves to the target groups and let them have the choice according to their needs, capabilities and preferences. Sometimes you start with one or two products and then, after realizing additional market opportunities, additional products are taken on board.

In the selection of technologies, the needs and perception of both potential customers and users on the one hand and potential producers and traders on the other hand have to be taken into consideration.

New technologies often have to be adapted to the local requirements. It is important to reserve time and resources for several loops between producers and users of a new ICS to make sure that the stove model is well accepted and matured before the actual market introduction. In the reality, there are tremendous time pressures which may tempt one to take short cuts. However, this might be the wrong place to cut corners.

“Why should poor people spend their little cash to buy an improved stove?”

This question has to be answered through the perspective of the potential buyers to investigate if there is a business case. User group discussions or test sales can assist to verify the strength of an ICS market case.

In the past, the following questions have helped GIZ to identify the right technology choice. They might be useful for the inception study:

There is a close link between the modes of production and the use of tools, division of labor, use of mechanical and electrical machines, etc. These differences influence the quality, quantity, vulnerability and the cost of production. The extreme cases are on the one hand the “do-it-yourself” self-help stove and on the other hand the industrially produced stoves imported from China. In between, there are fixed stove build by trained artisans, artisanal portable stoves build in local workshops and more or less mechanized production centers of portable ICS at national level. 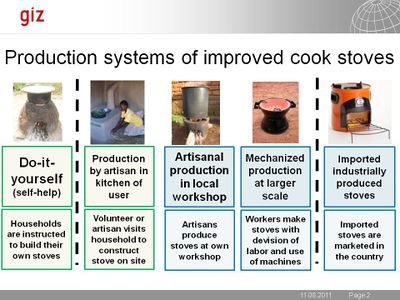 Production systems (and their typical products) can differ on various characteristics: 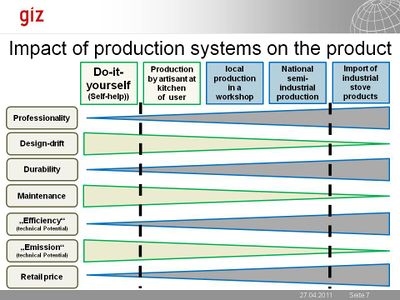 These differences can pose challenges for an ICS intervention: 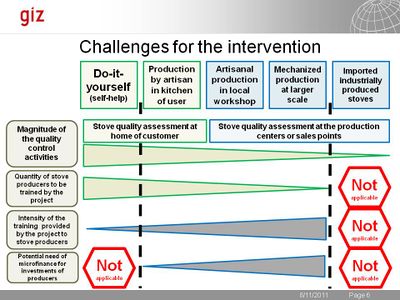 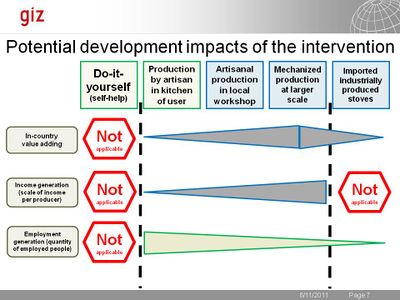 Questions for the inception study:

If a local production of stoves is to be considered in the planning process, the inception study has to provide information on the potentials for such a development path.

Often projects cooperate with partners such as NGOs, consultants, and public services for project implementation. In this case it is advisable to already collect information on potential partners during the inception study.

Who are the service providers in or near the region experienced in the following:

For each potential partner/service provider it is useful to know the following:

Retrieved from "https://energypedia.info/index.php?title=Content_of_Planning_Cookstove_Interventions&oldid=255068"
Categories:
Cookies help us deliver our services. By using our services, you agree to our use of cookies.