Over the last thirty years there have been many attempts to develop improved stoves. Such stoves have been accepted by communities only if they make cooking easier, cleaner, and more convenient. At the same time, stove producers have a duty to ensure that the stoves they supply do not only save fuel but also reduce harmful emissions. Any emission should be removed from the kitchen, either with a chimney and/or good ventilation in the kitchen. Many stoves have fulfilled these requirements, but some of them have failed. As stoves differ greatly in technical performance, stove testing is necessary to identify clean stoves and to compare different stove models.Thus, current developments focus on quality and performance control, for which standards for improved cookstoves have been developed. Stove testing is a way of evaluating whether these standards are being met .

The technical performance of stoves is tested according to internationally agreed test procedures related to energy efficiency, emission control, and safe use. Tests known as Stove Performance Tests focus on minimizing fuel consumption and the recently developed Emission Control Tests focus on minimizing harmful emissions. Emissions and fuel use have to be tested at the same time to avoid running a test to achieve good fuel economy at the expense of the emissions. And vice versa. For practical reasons, emissions are mostly measured in laboratory tests like the water boiling test described below.

This laboratory-based test is designed to explore the most basic aspects of stove performance in a controlled environment. A prescribed amount of water is brought to the boil and kept simmering for a given period of time, while the fuel consumption (and recently also the emissions) is measured. As it is a short test, and the results are not highly variable, relatively few tests can give informative and quick feedback. The WBT is a useful tool in the process of stove development or when comparing very different stoves. It allows to accurately spot the effect of small changes in stove design, fuel quality, or other physical variables. It can also be used in field tests to determine whether stoves have been built to match their design criteria on cooking time, fuel use, and emissions. It does not reflect field performance because the way typical local dishes are prepared can be very different from just boiling water.
Currently revisions of the test protocols are being discussed, but no new protocol has yet been accepted.

The Water Boiling Test Version 4.1.2,  Cookstove Emissions and Efficiency in a Controlled Laboratory Setting was discussed without reaching consent for a long time.

-> See documents and the discussion

The latest development was the Consensus reached in Lima during the 2011 Forum of the Partnership for Clean Indoor Air.

The consensus reached among major stakeholder in standards and testing during the PCIA meeting in Lima in February 2011 resolved to adopt a temporary rating system of stove technologies in tiers of performance in the areas of fuel efficiency, indoor air quality, emissions of PM and CO, and safety. Each area, to be ranked seperately, reflects a sequence of evolution from Tier 0 for ‘typical unimproved’ to Tier 3 ‘to achieve significant, measurable high goals’. The WBT 4.0 protocol with suggested modifications (for details see document) should be used in the interim, while developing a more comprehensive protocol, that also incorporates field operating conditions into the laboratory test and requires certain field validation. E.g. it is envisaged to test the performance of a stove with commonly observed variations in fuel moisture, feeding rate, fuel type, etc. to evaluate, how a stove can adapt to a range of 'unintended' uses by the in the field. The new protocol should also evaluate particulate composition including black carbon and address batch-feeding stoves that are not well captured by the current protocols. It also stresses that testing should be done closer to the users and the real fuels people commonly use. Thus, the establishment of qualified regional testing centres should be promoted.

-> More information and detailed description of the latest protocols on the Aprovecho homepage or on the partnership for clean indoor air homepage.

To overcome the shortfalls of the WBT two complementary tests have been developed with lesser degrees of control over the variables, but closer to reality in stove usage: the Controlled Cooking Test (CCT) and the Kitchen Performance Test (KPT).

Like the Water Boiling Test, the Controlled Cooking Test measures the fuel consumption of a stove for a specific standardised cooking task typical for a certain region. The CCT can be done either in a laboratory-environment or in the kitchen of a real user while the regular user operates the stove and the tester observes and records all the influencing parameters. The duration of the CCT is determined by the chosen typical cooking task. As well as being closer to day-to-day life, it allows the stove properties to be measured in a reproducible way by minimizing the influence of other factors. The CCT is increasingly important for projects that want to register for the CDM market with the Goldstandard. Discussions are under way with the UNFCCC to accept results of CCTs instead of the much more expensive KPTs.

The Kitchen Performance Test is an entirely field-based procedure that evaluates the effect of stove interventions in real-world conditions: the KPT is carried out over several days in the homes of users. Fewer parameters are controllable as the tester is not present all the time during the test. It includes quantitative surveys of fuel consumption of the participating household, and qualitative surveys of stove performance and acceptability. The KPT is more time-consuming, thus more expensive; however, it is the best way to monitor the stove’s real impact on fuel use and cooking behaviour in the participating households. The KPT is increasingly important for projects that want to register for the voluntary carbon market to prove the actual fuel savings realized by the users in their day-to-day cooking.

--> An example of a KPT performed in Kenya

Other references relating to the Water Boiling Test:

Wood is made up mostly of carbon, hydrogen and oxygen. The main products of complete combustion are carbon dioxide (CO2), water vapour and heat. In reality, it is difficult to achieve a complete combustion of biomass in stoves. Some stove designs have fewer emissions than others, but the fuel properties still have a big influence: even the best stove can hardly burn wet wood properly. Incomplete combustion results in emission of small particles, carbon monoxide (CO), oxides of nitrogen (NOX), formaldehyde, benzene and many other potentially harmful organic substances. In terms of health, particulate matter (PM) and CO emissions are most important. These two pollutants are mainly measured in Emission Control Tests. Due to the nature of the fuel, wood stoves cause higher PM emissions than CO emissions. In charcoal, the volatiles causing the small particulates in the emissions are already removed from the charcoal in the production process. So charcoal stoves have less PM emissions, but emit usually extremely high levels of CO, as the pot often sits very close on top of the charcoal bed and does not leave space for the CO to burn.
For more details on pollutants and how they affect the human body see: David Pennise (2005): Biomass Pollution Basics. Presentation.

Emissions can be measured either from the plume of smoke rising from the stove or at a designated point in the room that reflects the approximate position of the cook. There are a number of relatively cheap, reliable and easy to handle instruments for measuring the CO concentration from stove emissions. By contrast, measurement of the small respirable particles, also called particulate matter (PM), has been quite difficult until very recently. PM are aerosols comprising of solids (dust, soot) and liquid droplets of tars and other combustion products (excluding water vapour). They occur in a wide range of sizes (between 0,005µm and100 µm in diameter) and with very diverse chemical compositions. The small respirable particles have more adverse effects on health as they can penetrate the lungs more deeply. Hence modern analysis methods focus only on the ‘fine’ particles with diameters below 2.5 µm, called ‘PM2.5’ or below 1µm, called PM1.0.
There are two main methods for quantifying PM exposure:

It is agreed upon that fuel consumption and emissions of a stove must be monitored at the same time, so benchmarks for total PM- and CO- emissions of a stove during a standard performance test are being discussed: ‘improved’ stoves should possibly not produce more than 1,500 mg of particulate matter and 20 g of CO during a 5-l Water Boiling Test. However, this does not necessarily reflect the real exposure of the cook in the kitchen under day-to-day conditions.
Determining the actual exposure levels to which a person is subjected involves personal monitoring, e.g. attaching dosimeter tubes (glass tubes containing chemicals which stain when exposed to carbon monoxide) directly onto the clothing of either the cook or other member(s) of the household, or lightweight electronic carbon monoxide detectors that can be worn around the neck. Although monitoring household members is technically more challenging, it gives direct information about real exposure of people to hazardous smoke.
Aprovechohas recently developed portable in-field emissions testing equipment to monitor indoor air pollution. The Portable Emissions Monitoring System (PEMS) allows real-time monitoring of CO, CO2 and PM emissions. It is an invaluable tool for stove development and testing, and helps to understand how any change in the design or the operation of the stove affects emissions. The Indoor Air Pollution Meter (IAP meter) is a smaller and cheaper version that allows stationary or on-person monitoring of CO and PM, as it comes with a small back that can be worn by the cook. The equipment can be ordered here.

A short overview on IAP reduction and measuring options for the pollutants CO and PM has been developed by GIZ HERA as follows. 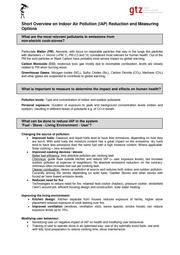