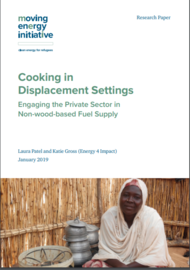 Almost invariably, refugees lack access to modern cooking appliances and clean fuels. Most use firewood to prepare their meals which is either provided by humanitarian agencies or collected by travelling increasingly longer distances as refugee situations become protracted. During these journeys, which can be time-consuming and dangerous, refugees face the risk of conflict with neighbouring communities equally starved of energy sources for cooking.

Providing clean and reliable cooking fuel and stoves is a major challenge for humanitarian agencies and host countries alike. Many countries, such as Tanzania and Bangladesh, are reaching a crisis point as firewood is decreasingly available near refugee camps and no alternatives exist. Countries hosting refugees are beginning to recognize the environmental impact of relying on firewood for cooking. For example, in 2017, the Ministry of Disaster Management and Refugees in Rwanda recommended a ban on firewood prompting the UNHCR to trial alternative fuels such as liquefied petroleum gas (LPG).

The Moving Energy Initiative (MEI) set out to design alternative solutions that could meet the cooking needs of refugees residing in camps while also being clean, affordable and sustainable.

The MEI started nu looking at the private sector. Our research, and on-the-ground work, showed that private energy providers could be a major part of the solution. Refugee camps and other displacement location can offer private cooking fuel companies the opportunities to expand their customer base with concentrated demand and the potential for economics of scale. Various studies show that refugees are already engaging in markets and using what little income they have to purchase traditional cooking fuels such as firewood and charcoal. However, private cooking fuel companies have remained largely overlooked by humanitarian agencies. Likewise, the private sector has not made major investments to supply alternative fuels to these markets with a few exceptions.

There are several reasons for this. In most cases, the legal status of refugees is uncertain and government policies regulating their economic integration are unclear. However, there is also doubt over whether refugees would be willing to pay for alternative fuel solutions and there are also difficulties with accessing refugee camps which can put private cooking fuel companies off from exploring this market. But bringing the private sector into the picture is worth exploring - not least because of the potential to improve health and safety in refugee households and to safeguard the environment. Fumes from fuels such as firewood, for example, cause chronic respiratory illness and there's always the risk of fire. As a result, we decided to try something different and invited private sector companies to work with us to design long-term solutions.

The results of a 2017 survey of households in Kakuma refugee camp in Kenya showed a gap between the preferences of refugees and their ability to pay for cleaner alternative fuels. Using that data, we designed a concession that would subsidize alternative fuels to the consumer capped at a price deemed affordable to a majority of Kakuma households.

The MEI launched a competition inviting local companies to propose their own creative solutions for integrating the concession into their long-term business plans. The gap between the true cost of the fuel and the subsidized price to the consumer would be paid upon proof of sales by the MEI or another donor. Bidders were also asked to include customers from neighbouring communities into their plans and to figure out ways to phase out subsidies over time.

The winning company -the National Oil Corporation of Kenya (NOCK)- proposed a concession to supply LPG to refugees in the Kakuma and Kalobeyei refugee camps and to serve the surrounding local community as well. Their proposal included income opportunities and training on entrepreneurial skills for women and young people -both camp residents and neighbouring communities- to distribute and exchange cylinders through local retail shops.

In addition to the income generation impacts, NOCK anticipates improvements in the health of LPG users and reduced forest degradation. They will receive $50,000 prize that will be used to establish a revolving fund for households to finance LPG kits, consisting of a stove, accessories and cylinder, which is a common barrier to market entry. NOCK's proposed concession is expected to support its existing large-scale 1.2 million-cylinder initiative, supported by the Kenyan government, to accelerate LPG use among poor households.

While NOCK's proposed concession has not yet been implemented, there have been some important lessons learnt while designing the concession and exploring how other engage private companies to improve refugees' access to cleaner cooking fuels:

Retrieved from "https://energypedia.info/index.php?title=Cooking_with_Clean_Fuels:_Designing_Solutions_in_Kakuma_Refugee_Camp&oldid=321369"
Categories:
Cookies help us deliver our services. By using our services, you agree to our use of cookies.