Solid fuels, including both biomass and fossil fuels, have often been considered as ‘the problem’ in discussions on improved cooking solutions, although most can be burnt very cleanly and efficiently. Despite this, when used in a traditional manner, solid fuels can result in measurable inefficient burning, and high concentrations of harmful emissions.

For many decades, the use of solid biomass fuels was considered a ‘transitional problem’, as it was assumed that societies would sooner or later move up the energy ladder as a result of increased purchasing power and overall economic development. However, due to population growth the total number of people still using solid fuels for cooking and heating has increased to around 2.9 billion[1]. Around 95% of these users live in Sub-Saharan Africa and Southeast Asia. In Southeast Asia over 1 billion people depend on solid fuels to cover their energy needs, mainly for cooking and heating. The diagram shows that the use of solid fuels for cooking is rising sharply in Africa, while it has nearly disappeared across Europe and the Americas in both relative and absolute terms. 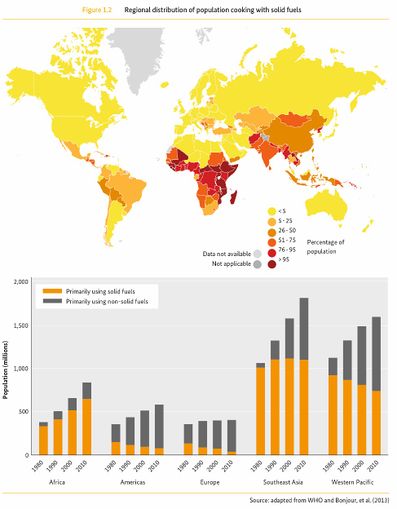 Solid and non-solid fuel use for cooking, Source: Roth (2014): Micro-gasification: Cooking with gas from dry biomass

Solid fuels can be categorised into renewable, biomass and fossil fuels, e.g. coal. Renewable solid biomass fuels include firewood, charcoal, dung and agricultural residues. Woodfuel, comprising of firewood and charcoal, is only a renewable energy source if the same amount of wood that was cut down is allowed to grow back. If woodfuel is to be sustainable it should furthermore be ensured that it burns cleanly, as its polluting products such as smoke particles and volatiles emitted by the wood are dependent on the combustion procedure of the wood. Except for harvesting, collecting and chopping, firewood is used in an unprocessed manner, whereas charcoal and agricultural residues and dung are often processed into briquettes, pellets, dung sticks or plates. Aside from considering the burning technology, the heat output of fuels depends on the carbon and moisture content of the fuel. In the case of all solid fuels, moisture reduces the net usable energy output of a fuel, because the evaporation of water requires heat and thus energy, which is therefore unavailable to increase the fire temperature and the cooking process. This principle is very well illustrated for firewood.

Retrieved from "https://energypedia.info/index.php?title=Cooking_with_Solid_Fuels&oldid=351709"
Categories:
Cookies help us deliver our services. By using our services, you agree to our use of cookies.