Introduction - What is Firewood? 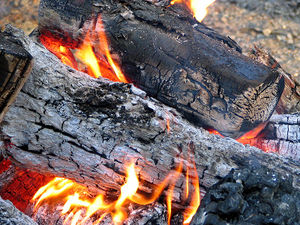 A key characteristic of humankind is the ability to control fire and utilize it to prepare food. The oldest cooking fuel is firewood[1] in the form of logs and branches from trees. Firewood (synonym: fuelwood) is defined by the Food and Agriculture Organization of the United Nations (FAO) as “wood in the rough (from trunks and branches of trees) to be used as fuel for purposes such as cooking, heating or power production."[2] Firewood can be categorized into hardwood and softwood: in comparison to hardwoods, softwoods burn more quickly and generate less heat owing to a lower energy (carbon) content per volume. However, energy content per weight is similar for all hardwood and softwood; the moisture content of a firewood primarily determines its energy content. The drier the firewood, the less energy is required to evaporate the water, thus the more energy is available for heating or cooking purposes.

How does Firewood Burn?

Firewood cannot ‘burn’ directly. Firstly it needs to be transformed into woodgas (pyrolysis), which can then be combusted when mixed with a certain amount of oxygen and ignited. A temperature of over 300° C is required to start the pyrolysis process and create combustible ‘wood-gas’. In most cases, this ‘external’ heat is initially provided by a lighting material, such as kerosene or a match. Once the temperature begins to increase, the following processes occur: 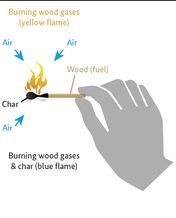 Drying and pyrolysis are both endothermic processes, meaning that they consume heat and do not create any useful surplus of heat. The speed of the process is determined by the amount of available heat input and the amount of heat required to first dry out the fuel before the temperature of the biomass can attain a level at which pyrolysis can start: using air-dried fuel (moisture content of 10% – 20%) is recommended in order to shorten the drying time and reduce the required heat input. 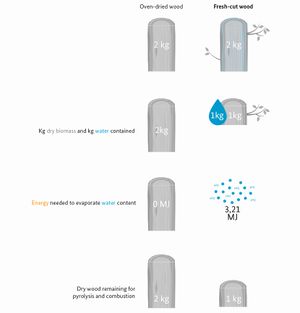 The efficient burning of firewood is determined by the availability of oxygen and the temperature. The Rocket-Stove-Principle optimises both factors. However, even the best-designed stove will perform inefficiently when used with wet firewood, because moisture reduces the net usable energy output of a fuel. The figure below illustrates how energy is wasted in firewood with high moisture content. It takes up to 3.21 MJ of energy to evaporate one kg of water in the process of heating the firewood up to the needed pyrolysis temperature of around 400° C from an ambient temperature. This takes into account the fact that water vapour is also heated to the same temperature as the wood-gas. The energy required to heat the water vapour is, in turn, not available for cooking. It is preferable to avoid using wet fuel and allow the sun to dry it rather than unnecessarily waste energy on evaporating water. Besides the lower energy output, firewood with high moisture content is more difficult to light. Moreover, the moisture from the fuel cools the flames and evaporated steam mixed with the combustible gases act as a fire-extinguisher leading to incomplete combustion as well as smoke.

The existing research on firewood is limited, mainly due to the fact that the definitions and conversion rates for firewood vary, and that firewood is primarily produced and traded in the informal sector. Statistics are often only available on “woodfuel”, which is firewood and wood transformed into charcoal. Worldwide wood fuel totals amounted to around 1.86 million m³ in 2010. Asia is the region with the highest production of woodfuels, accounting for 771 million m³ or nearly 45% of global production. This is strongly driven by China and India which together consume one quarter of global woodfuel consumption. Due to substitution for other fuels, the Asian consumption of woodfuel has decreased by 3.2% from 2005 -2010. Wood fuel  consumption in Africa and Latin America continue to grow.[3]

Presently, climate policies in Europe and North America are contributing to growing demand for wood fuel. Densified wood fuel (wood pellets, briquettes) and chips in particular are gaining in importance due to the increasing share of heating and electricity generation applications that utilise woodfuel. Consequently, Europe’s wood production increased from 125 million m³ in 2001 to nearly 160 million m³ in 2011[3].

How is Firewood Used for Cooking? 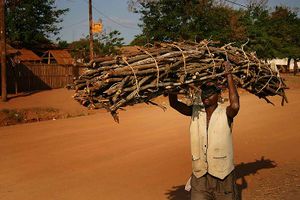 For households in developing countries, particularly in Sub-Saharan Africa, it is common for rural households to use firewood as their main source of cooking energy. The use of firewood in rural areas is still predominant since it is often the only available, accessible and affordable fuel in the region.

Accessibility of firewood is a crucial factor for households using firewood for cooking purpose, especially in rural areas where alternative fuels such as LPG are often not reliable available. Households can collect firewood close to their homesteads at all times due to the fact that it is available year-round and not susceptible to heavy seasonal fluctuations. Nonetheless, where firewood is decreasingly available, people are faced with ever-increasing distances and must therefore expend more labor and time to collect firewood, particularly in arid and semi-arid areas.

Affordability plays a decisive role in the use of firewood for cooking. Considering that many households can collect firewood for free, it will remain the cheapest energy source for cooking and heating. If firewood is purchased at the firewood market, households can chose to only acquire small amounts of wood, which allows for a degree of financial flexibility. The relative price for cooking with firewood remains substantially below that of potential substitute fuels (e.g.: Mozambique: firewood 100%, charcoal 176%, LPG 282%.[3] However, it must be recognised that firewood would be extremely expensive if the additional cost of labor done by women and children collecting firewood were considered as well as the negative impacts on health and the environment were internalized.

Acceptability of firewood is very high as it has been used since ancient times and has therefore shaped cooking habits accordingly.[1]

Health and Environmental Impacts of Firewood Burning for Cooking

Despite popular belief, all fuels can achieve relatively clean combustion granted that proper technologies and techniques are used, as the environmental and health benefits of a fuel are primarily dependent on its processing and usage techniques. However, since many people still use traditional stoves, the burning of firewood continues to have a negative impact on health due to high emissions, such as respiratory and heart diseases, lung cancer, and eye irritations. Households using wood in an open fire experience particulate matter (PM) concentrations of over 3000μg/m3 in the air compared to households using charcoal stoves, which are only exposed to PM concentrations of around 500μg/m3.[4] The WHO recommends that emission rates of PM 2.5 from household fuel combustion should not exceed 0.23 mg/min in unventilated and 0.80 mg/min in ventilated spaces[5], with health impacts of such particulate matter depending on a range of parameters such as human exposure, fuel moisture, burning rate, ventilation and cooking behavior.

Nowadays wood energy consumption is no longer the primary cause of global deforestation, but rather the clearing of land for farming. However, concentrated industrial and urban demand for firewood combined with weak regulation and control still contribute to forest degradation and deforestation. Compared to charcoal, the production of firewood contributes less to deforestation and degradation. The direct use of firewood requires smaller quantities of wood to satisfy the same energy needs as there are no conversion losses. Furthermore, firewood is less commercialized and a great portion of consumed firewood is covered by the collection of dead branches, trees outside of forests or fallow land. However, in many areas (especially around larger villages and cities), the amount of harvested firewood exceeds the annual growth rate of forest resources while inefficient harvesting and utilization practices are prominent. This counteracts the potential for firewood to be a renewable resource and calls for the establishment of a conducive policy framework that fosters sustainable forest production and management and the promotion of efficient conversion and consumption technologies.[1]

Retrieved from "https://energypedia.info/index.php?title=Cooking_with_Firewood&oldid=351694"
Categories:
Cookies help us deliver our services. By using our services, you agree to our use of cookies.