From the 'Energy Ladder' to 'Fuel Stacking'

This article investigates the origins of the ‘Energy Ladder’ concept, its applications, the factors affecting it, and its relation to other correlated concepts, such as: ‘Energy Transition’ & ‘Energy Stacking’. It also gives a critical examination of the energy ladder and explains the current concept of fuel stacking.

Origins of the 'Energy Ladder'

The idea of the energy ladder started to emerge in parallel to the fuel-wood crisis in the 1970s-1980s as Toole (2015) suggests. The energy ladder was designed as a hierarchical relationship between households’ rise in economic status and the fuel type(s) they use for cooking and heating[1].  According to consumer economic theory, when the income increases, the consumer usually chooses to purchase more “superior” goods and less “inferior” goods[1]. The energy researchers then linked the consumer economic theory with energy, showing that also households act as if they were consumers, who try to maximize their energy utilities accordingly to their economic status[1][2].

Hence, as the income of a household rises, the household starts consuming different types of fuel which are located in higher-ranked rungs of the ladder[1].

According to Paunio (2018), indoor air pollution (IAP) expert Kirk Smith introduced the energy ladder concept to the World Health Organization (WHO), during the early 1990s. The concept was introduced as a way of understanding how annual deaths caused by IAP could be prevented[3]. In that case, the energy ladder simulates the state of the development of a country[3]. As countries become wealthier, households start moving away from biomass into national electric grids or district heating systems[3]. This way, the economic development of a country is reflected in the households' energy-behaviour[3].

Constructing the Rungs of the Ladder

According to Toole (2015) & Nansairo et al. (2011), the association of the fuel types of the different rungs of the ladder is characterized in accordance to:

There exists a variation of how the rungs of the ladder were divided and constructed in different literatures and theories. For example, Hosier and Dowd presented a five-rung ladder, which is ordered ascendingly as follows[1]:

In another case, Reddy (1995) designed a six-rung ladder, representing the following ascending order[1]:

Furthermore –as shown in the following graph-, fuels can be also be divided into solids and non-solids. To each classification belong different fuels, which are allocated ascendingly along the ladder. 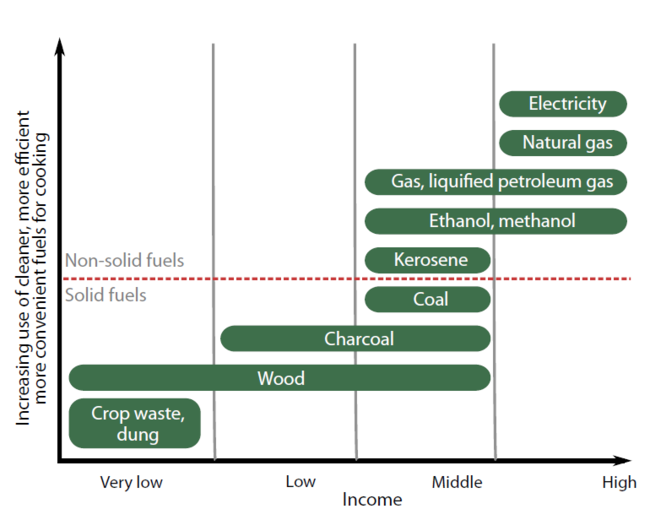 Another classification assumes that the rungs of the ladder differ regionally[4]. For example: in South Asia cow dung is at the bottom of the ladder, then crop residues, wood, kerosene, gas with electricity at the top of the ladder[4]. While in mainland Southeast Asia, wood represents the bottom rung, then charcoal, kerosene, LPG and electricity in ascending order[4].

Finally, a sort of generalization of the fuel types occupying the ladder can be applied as follows: biomass -> kerosene -> LPG -> electricity in ascending order[1].

The ‘Energy Ladder’ describes the change in energy-use and demand patterns in accordance to the variations in economic status of the household[5][2].

The lower the income of the households, the more they rely on biomass fuels, such as wood and dung[6]. When incomes start rising, a transition occurs where the households start shifting towards cleaner and more expensive fuels (LPG & electricity), hence, climbing the ladder[6][4]

Fully climbing the energy ladder can be presented as linear movement that is consistent of three different phases[2]. The 1st phase is when a household gains a socio-economic status, leading it to abandon inefficient cheap and polluting fuels, the 2nd is for the household to move away from reliance on traditional fuels into transition fuels such as: kerosene and coal, eventually, the 3rd phase is to fully switch into LGP and electricity[2]

Economic growth alone cannot be considered as the main and only driver for households to change their energy-use-behavior, as other important drivers participate in forming these decisions, such as: environmental pressure, technological advancement, resource availability, the choices people make, levels of urbanization and living standards[5][4]. 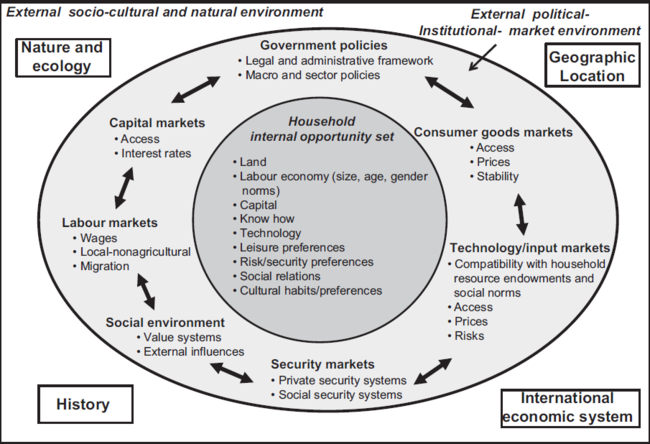 Even more factors that could affect the fuel-switching behavior of households: price changes, preferences, taste, reliability of supply, cooking and consumption habits, availability of technology, education, household composition and further cultural or habitual factors, which the energy ladder hypothesis has failed to include[6][1].

Hence, a complex and interactive web of factors influence households in taking decisions on any kind of fuel-switching. This process of switching does not happen as a series of simple disconnected steps, but it is an intertwined and connected[2]. Accordingly, the fuel-switching process is not unidirectional, and households can both use more advanced fuels for certain purposes, in combination with more traditional ones for other purposes of the household[2].

Taken these considerations into account, the new concept ‘Fuel Stacking’ or ‘Multiple Fuel Model’ has gained more relevance for explaining the household-energy-behaviour among researchers[2].According to the ‘Fuel-Stacking’ concept, with increasing income, households do not fully switch to different fuel types, they rather use an energy mix or as of a menu[6][2]. The households in that case, rely on multiple fuels in their energy-use, using higher proportions of superior fuels in mixture with inferiors ones[1][4].

As shown in the following figure, there exist two types of approaches to explain households’ energy-use-behavior and their economic development: the energy ladder & the concept of energy/fuel stacking. 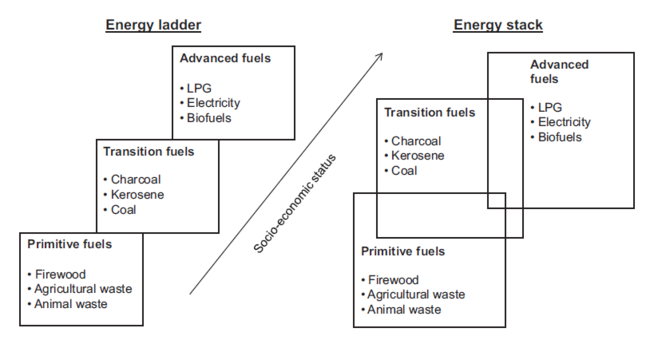 While the energy ladder suggests that households completely switch the fuels they use with increasing income, the energy stacking rejects that, and suggests an alternative behavior of using multiple fuels at the same time.

Though the two concepts resemble two different approaches, yet both construct a hierarchical relationship for fuel types, which can be generalized as follows: biomass -> kerosene -> LPG -> electricity. Notably, biomass can be considered a very clean and modern fuel in different cases, depending on the technology applied and the usage of the household.

Finally, despite the popularity of the energy ladder concept -for explaining the energy behaviour of the households- until the beginnings of the 21st century, the concept is becoming more outdated, being replaced by the fuel stacking one.

Retrieved from "https://energypedia.info/index.php?title=From_the_%27Energy_Ladder%27_to_%27Fuel_Stacking%27&oldid=317736"
Categories:
Cookies help us deliver our services. By using our services, you agree to our use of cookies.