Case Studies on How to Achieve Inclusive Energy Access

The Poor People's Energy Outlook (PPEO) 2018 Report - Achieving Inclusive Energy Access at Scale from the Practical Action looks at six case studies/lessons learned from clean cooking, decentralized electricity, and grid-extension programs to explore how energy access could be provided to the most marginalized population all over the world.

This article shortly summarizes each of the case studies.

The Government of Ghana promoted clean cookstoves already since 1989 but due to high unit cost of the stoves, the scheme failed as soon as governement funding stopped. EnterpriseWorks/VITA (EWV) then introduced the Kenyan jiko stoves as Gyapa. These stoves meet the tier 2 of the International Workshop Agreement (IWA) and targeted low-middle income households. These stoves were widely successful such that by the end of 2017 about 900,000 Gyapa stoves were sold, resulting in 800jobs and affecting 1.1 million Ghanaians.

Program's approach: The program  identified and trained local artisans for building the stoves,ceramic and the metal builders collaborated with the project and capacity-building training was provided to 200 retailers. Retailers were connected with manufacturers and received free transport as well as stoves on credit. The artisans also received upfront payment up to 50% to buy raw materials. The manufacturers also provided warranty to end-consumers for broken ceramic lining. EMV also carried out intensive marketing campaigns to boost the demand. 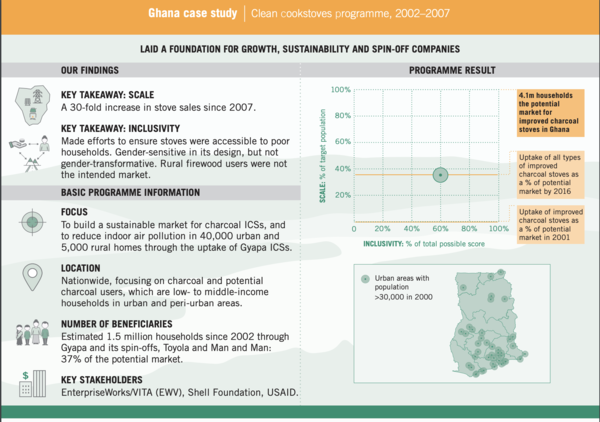 Since 1950, the Kenyan Government has promoted biogas programme in Kenya. The Kenyan biogas program (KBP) in 2009 actually became the driving force for promoting biogas projects in Kenya. By the end of 2017, 17,134 biogas were constructed benefiting some 103,000 people.

Program activities:The program before 2009 focused on end-user awareness raising and on building confidence in the technology through training in usage and maintenance. After 2009, it focused on 22 biogas marketing hubs which are associated with specific agricultural sectors such as dairy, coffee and tea farming (along with the farmer cooperatives). during the phase I, the biogas were subsidized but in the phase II, it offered result-based incentives to financial institution who could then provide loans to farmers. To incooperate more women, the program trained women masons, sought to reach women customers, and also encouraged participation in the national biogas users’ association.


Challenges: Building biogas plant as well as the appliances using biogas (burners, lights and even small generators) are still expensive. Affordability of biogas is therefore one of the biggest challenges. This is acute for women who have less access to credit and on average are poorer. The demand for biogas also partly slowed as some of the plants were of poorer quality. The farmers also requested for more trainings to learn how to use the bioslurry from the biogas. 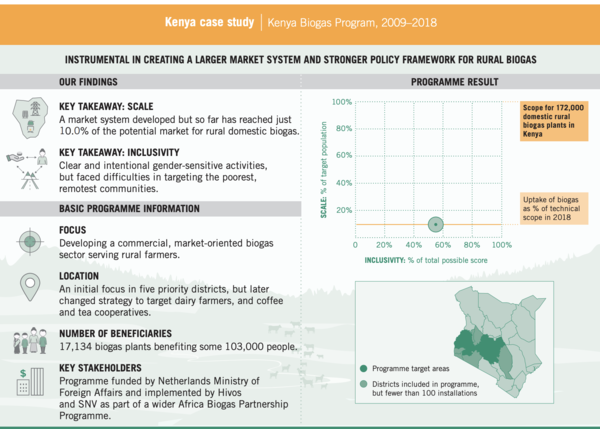 Nepal has a huge hydropower potential. Hydropower plants started in Nepal since 1980s and continued to 1990s through donor-funded programmes and government financial incentives. However, challenges such as system operation, maintenance and tariff recovery from hydropower plants remained. To address these problems, the Rural Energy Development Programme (REDP), was implemented from 1996 to 2011. This program installed 454 micro-hydro systems and reached nearly 58,000 households (600,000 people). These micro-hydro systems are all community-owned and managed.

Program activities: Community mobilizers were assigned six months prior to the program to raise awareness, provide training on productive uses of eelctricity, and ensure empowerment of vulnerable groups. Regarding the financing, 50% came from the central government, 10% from the local government, 20% from the target communities through in-kind labour, land and construction materials and the remaining 20% in the form of cash either upfront or via a bank loan.

Lessons learnt: Strong community mobilization, an innovative financing mechanism and decentralized program management has helped to deliver energy to the remote villages in Nepal. Focusing on female-driven community also helped to involve women into these projects. However, challengs such as lack of finance, grid interconnection of the micro-hydro and demand from the local community still remains. 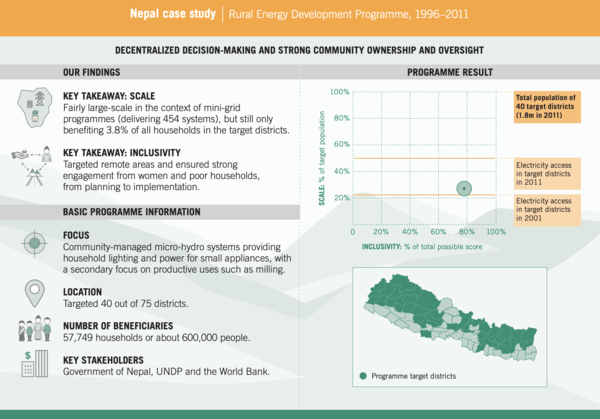 In 1990, only 35% of total South Africans had access to electricity. In 1999, the Government launched the Integrated National Electrification Programme (INEP) to promote solar home systems to tackle energy access. By early 2000s, around 40,000–60,000 SHSs were installed but demand fell after the Electricity for all campaign (as off-grid communities were expecting the grid). National energy access polices also did not prioritize off-grid solutions.


Program activities:The solar program was designed to provide energy access to the poor off-grid communities by subsidizing the SHSs and not to create a market for SHSs. The SHSs were also considered a interim solution till the grid arrived. 80% of the SHSs cost were covered by sudsidies and rest was financed by concessionaires who installed and maintained the systems for 20 years in exchange of revenue from the monthly users. The program had a static design outline that only a 50wp SHS could be sold to the customers. This did not meet the demand of all users and there were no clarity about also upgrading the systems. Eventually, grid arrived at many concessionaires areas and the customers then asked for their systems to be removed. Lack of clear rules about subsidies, delayed payment and static design of the program has prevented it from being successful.

Lessons learnt: The static design of the program failed to take advantage of the new development and price drop in solar products. The lack of market development was also a big drawback. The perception that solar home systems also was detrimental to the program. 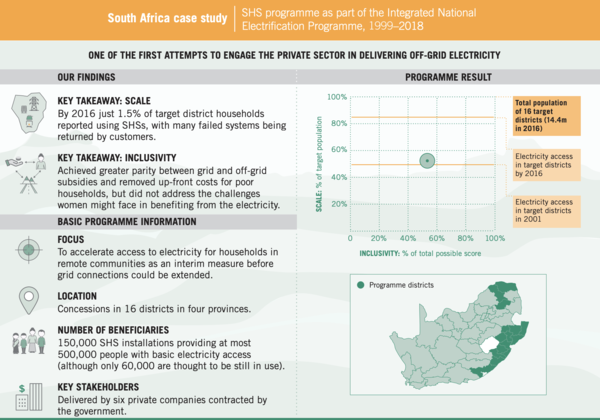 Grid based electrification started in India already in 1950s. Rajiv Gandhi Grameen Vidyutikaran Yojana (RGGVY) was the first household electrification program that prioritized household below the poverty line (BPL) and also connected them for free to the grid . It aimed to electrify villages over 100 households. The BPL household has be registered and also recommended by the village council

Program activities: RGGVY is state-owned initiative and to reach rural communities it planned to work via local companies, NGOs or individuals operating as franchisees. These franchisees managed meter reading, issuing bills, collecting payments and basic maintenance of the grid. This program had the most effect on study time for school children as the light enabled the children to study till late and it also had impacts on other productive uses such as growth of small villages, better access to mass media (TVs) and slightly improved health services. Other benefits included better transportation (built to transport equipment), reduced theft and reduced threat from wild animals and also reduced emigration. However, this program also faced many challenges. Transmission and distribution infrastructure were not capable of handling the new demand from new connections. There was not enough investments in new generation capacity and this resulted in frequent blackouts. Many BPL households were not registered and thus left out. Expanding the grid also was delayed due to errors in design, slow process of acquiring land and permits etc. 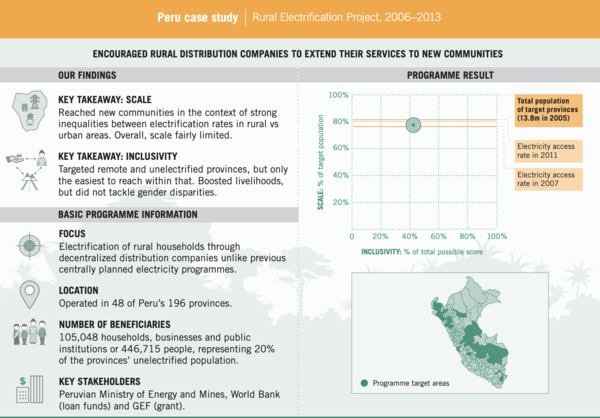 In 2006, Peru had a 80% electrification rate but in the rural areas it was only 40%. Rural Electrification Project (REP) was launched in 2006 and was a decentralized programs. REP companies designed their own program and then submitted to the ministry for approval and funding. The program closed down in 2017.

Program activities: This program focused on the supply-side support especially the distribution companies. Interested communities contacted the distribution companies withe their grid extension plan. Criteria included: more than 1,000 households and cost per connection within the USD 800 subsidy cap. For the off-grid, criteria included: at least 400 households and a 90% end-user price subsidy. Income of households under REP rose by 30%. About 21,111 enterprises and families also adopted electricity-powered equipment. Challenges included: no clear target on how to reach the indigenous population or women population was included.

This article is based on the publication:  Poor People's Energy Outlook (PPEO) 2018 Report - Achieving Inclusive Energy Access at Scale

Retrieved from "https://energypedia.info/index.php?title=Case_Studies_on_How_to_Achieve_Inclusive_Energy_Access&oldid=288334"
Categories:
Cookies help us deliver our services. By using our services, you agree to our use of cookies.