Cogeneration or combined heat and power (CHP) is the use of a heat engine to simultaneously generate both electricity and useful heat. When, additionally, cooling energy ist provided by this system, it is referred to as trigeneration. Information provided in this article is mainly based on the Cogeneration & Trigeneration Guide [1] published by GIZ.


Thermal power plants and heat engines in general, do not convert all of the available primary energy into electricity. In most heat engines, more than 50% of the primary energy is wasted as excess heat. By capturing the excess heat, CHP uses heat that would be wasted in a conventional power plant, potentially reaching an aggregate efficiency (electric and thermal) of 80% up to 95%, compared with at most 40% for the conventional plants. This means that less fuel needs to be consumed to produce the same amount of useful energy, or - as well - less pollution is produced for a given economic benefit. As there is such high potential in energy efficiency, cogeneration is considered to be an important contributor to climate change mitigation while offering economical as well as reliability benefits on energy supply. 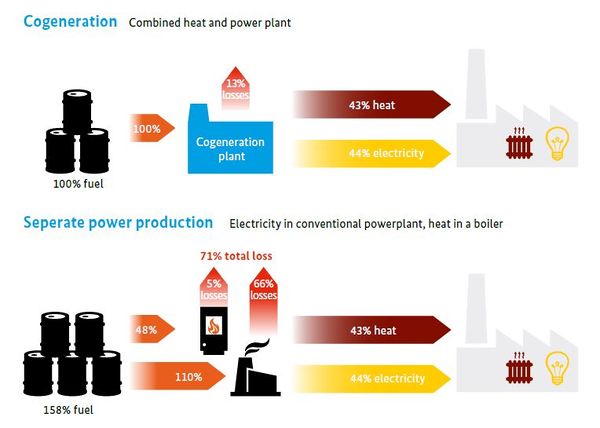 Cogeneration technology is applicable in a wide range of sector segments as shown in the figure below. For instance, cogeneration plants are commonly found in central heating systems for hospitals, hotels and industrial plants with large heating needs adding to their electricity demand.

Another field of application with high potential is the use within the powering agriculture context: By employing cogeneration technology, food processing plants can utilize biomass by-products to generate heat and power, which in return can be used for the production process..


Obviously, cogeneration plants are ideally suited for on-site generation and thus can be an important building block for the establishment of an energy system based on distributed generation. System capacities depend on the field of application, but usually range between a few kilowatts electric (kWel) up to 20 megawatts electric (MWel) when regarding projects related to international development cooperation.


A "best practice" example for possible applications is shown by the integration of cogeneration technology in palm oil industry in Honduras. 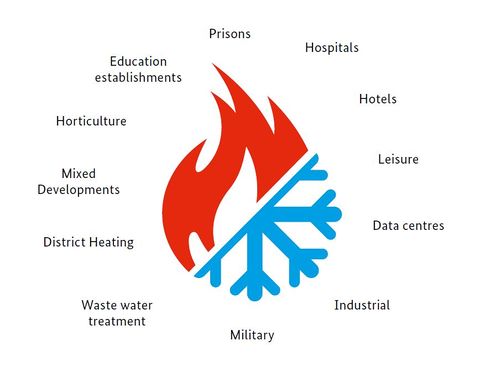 Cogen encompasses a wide range of proven technologies. Combined heat and power technologies can be divided into small scale applications, starting from some 1 kW el engines that are usually focused on thermal energy supply, up to large-scale power plants mainly focused on electric power production. These types of cogen plants can be differentiated by technology and feasible capacity, as illustrated below.

In general, one can differentiate between two basic principles:

As possible plant sizes vary depending on the technology, so does the choice of fuel. Waste heat recovery and thus cogeneration can be operated in all types of combustion processes and fuels. The choice of fuel is subject to fuel availability and costs as well as technological and economic optimisation. Common types of fuels are:

Coal is the dominant fuel for large-scale cogen (> 50 MW el) in the power sector, whereas natural gas and biomass are common in smaller-scale applications.

Not listed above for lack of a real fuel, cogeneration can also be applied to steam turbines being part of a concentrated solar power (CSP) plant.

The efficiency of cogeneration can vary with technology, dimensions, boundary conditions and fuels, but high efficiency gains of 30% and more compared to separate generation of heat and power are common. It is important to mention that this efficiency relates to the aggregate - electric an thermal - efficiency.

The influence of boundary conditions on system efficiency can be illustrated by a simple example: CHP is most efficient when the heat can be used on-site or very close to it. Overall efficiency is reduced when the heat must be transported over longer distances. This requires heavily insulated pipes, which are expensive and inefficient.

Cogeneration and trigeneration (also known as Combined (Cooling) Heat and Power (C(C)HP)) are key technologies to unlock energy efficiency potential in many sectors such as commerce and industry, buildings and other public infrastructure.

The convincing advantage of this technology are high efficiency gains of 30% and more resulting from one single generation process of power, heat and – for trigeneration – also cooling in comparison to separate electricity generation usually wasting vast amounts of heat. Additional strong benefits comprise CO2 and NOx emission reductions, GHG neutral cooling, as well as cost reductions based on better fuel efficiency and flexible, decentralized on-site plant operation, which helps to avoid energy losses and expensive grid upgrades over long distances.

Retrieved from "https://energypedia.info/index.php?title=Cogeneration&oldid=175696"
Categories:
Cookies help us deliver our services. By using our services, you agree to our use of cookies.