CSP Systems are replacing fossil fuels with CO2-emission free energy and therefore reduce the overall greenhouse gas emissions. According to Greenpeace the energy pay back time of an CSP plant can amount to just 5 months depending on its configuration and size.[1] CSP Plants can remain in operation for almost 40 years and thus demonstrate its durability and reliability. 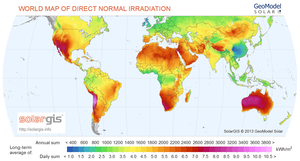 The favourable regions to apply CSP Technology are open for discussion. However, a good indicator to identify CSP potentials is the direct normal irradiation (DNI). Maps can show the distribution of DNI all over the world and thus give a first clue as to where CSP power plants should be built.

Generation costs are currently at reasonable levels and still dropping. They range from 150 US-$/ MWh to 200 US-$/ MWh.[2] The diagram below is taken from the report of the NREL. Hours of TES meaning the thermal storage capacity of the power plant: the time measured in hours that the given power plant can run at rated power output with the storage as its only energy source. The Solar Multiple describes the relation of the installed solar power to the power of the motor block. An over-sized power plant (SM > 1) produces more energy at full solar power intake than the motor can transform. It therefore needs storage facilities to divert the power surplus; otherwise the energy gets spilled. 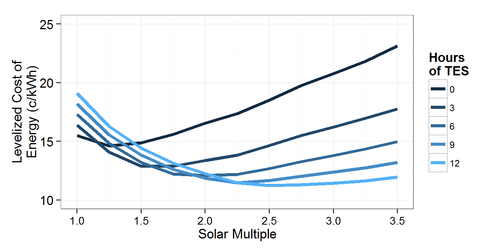 The SunShot Initiative Concentrating Solar Power Research and Development is trying to reach generation costs of 60 US-$/ MWh by addressing technical barriers for solar fields, receivers and power plants.[3] For more information on levelized cost of energy/ generation costs also see the Cost Analysis of the International Renewable Energy Agency.

According to investigations done by the European Academies Science Advisory Board Concentrating Solar Power plants potentially impact the environment in the following ways:

The environmental impact of CSP is greatly reduced compared to fossil-fuel-based sources, with the main reason being the reduced carbon dioxide emissions resulting from the substitution of fuel with sunlight as an energy source.

CSP systems typically use steam turbines to produce mechanical power which is then converted to electricity. As a result, there are similar issues around noise and visual amenity if they are located overly close to built-up areas.

In some cases, CSP systems are provided with fossil fuel backup, allowing electricity production for a larger number of hours per day. In such cases, the environmental impacts of normal fossil-fuel based electricity production apply, proportionally to the amount of time that the backup is used. However there are also numerous examples of large CSP systems which have no fossil fuel backup, such as the Crescent Dunes system in Tonopah, USA.


Water use in CSP systems depends heavily on whether or not dry cooling is used in the power block. If so, CSP water use is comparable with that of a coal power plant. If not, CSP water use is comparable with a photovoltaic power plant, where water is used primarily for mirror cleaning together with a small amount of steam blow-down. Increasingly, dry (air) cooling is being used in CSP systems due to the high cost of water in arid/desert areas.


Parabolic trough systems typically make use of a synthetic oil as the heat transfer fluid which circulates through the field. There is a risk that this oil can leak, and enter the soil, and is also flammable[6]. These risks can be minimised through standard inspection and maintenance activities.


CSP systems are large, and in particular, central tower systems can be visible from a long distance. The glint and glare of reflected light from CSP systems, as with PV systems, needs to be considered if locating CSP systems close to airports or flight paths.


Birds have been reported to have been killed when flying through the focussed beam of CSP systems, and this has been the topic of recent research. However it appears that suitable operating strategies (in particular, the way in which mirrors are pointed when they are not being used to produce heat) can greatly reduce this problem.


CSP systems occupy relatively large areas of usually arid/desert land. In some cases, rare flora and fauna exist in these locations and conservation action needs to be considered.


A recent meta-study of lifecycle analysis for CSP estimated that including building materials, the greenhouse gas emissions (carbon dioxide equivalent) from CSP electricity is 26 g/kWh of electricity[7]. This means that the overall environmental impact from CSP is very similar to that of other renewable energy sources.

Retrieved from "https://energypedia.info/index.php?title=Concentrating_Solar_Power_(CSP)_-_Basics_and_Introduction&oldid=296048"
Category:
Cookies help us deliver our services. By using our services, you agree to our use of cookies.