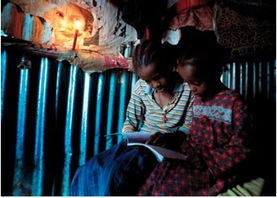 Energy poverty is a lack of access to modern energy services. These services are defined as household access to electricity and clean cooking facilities (e.g. fuels and stoves that do not cause air pollution in houses).[1]

Access to energy is a prerequisite of human development. Energy is needed for individual survival, it is important for the provision of social services such as education and health and a critical input into all economic sectors from household production or farming, to industry. The wealth and development status of a nation and its inhabitants is closely correlated to the type and extent of access to energy. The more ready usable energy and the more efficient energy converting technologies are available, the better are the conditions for development of individuals, households, communities, the society and its economy. Thus, improving access to energy is a continuous challenge for governments and development organisations.[2]


There are several different approaches to define energy poverty and they can be classified as follows and are explained below:

Each one of these approaches has strengths and weaknesses.

A person is in ‘energy poverty’ if they do not have access to at least:


(b) 120kWh electricity per capita per year for lighting, access to most basic services (drinking water, communication, improved health services, education improved services and others) plus some added value to local production

An improved energy source for cooking is one which requires less than 4 hours person per week per household to collect fuel, meets the recommendations WHO for air quality (maximum concentration of CO of 30mg/M3 for 24 hours periods and less than 10mg/ M3 for periods 8 hours of exposure), and the overall conversion efficiency in higher than 25%. [5]

Development of an Energy Poverty Line

Abstract: Access to energy, especially modern sources, is a key to any development initiative. Based on cross-section data from a 2004 survey of some 2,300 households in rural Bangladesh, this paper studies the welfare impacts of household energy use, including that of modern energy, and estimates the household minimum energy requirement that could be used as a basis for an energy poverty line. The paper finds that although the use of both traditional (biomass energy burned in conventional stoves) and modern(electricity and kerosene) sources improves household consumption and income, the return on modern sources is 20 to 25 times higher than that on traditional sources. In addition, after comparing alternate measures of the energy poverty line, the paper finds that some 58 percent of rural households in Bangladesh are energy poor, compared with 45 percent that are income poor. The findings suggest that growth in electrification and adoption of efficient cooking stoves for biomass use can lower energy poverty in a climate-friendly way by reducing carbon dioxide emissions. Reducing energy poverty helps reduce income poverty as well.

The provision of modern energy services is recognised as a critical foundation for sustainable development, and is central to the everyday lives of people. Effective policies to dramatically expand modern energy access need to be grounded in a robust information-base. Metrics that can be used for comparative purposes and to track progress towards targets therefore represent an essential support tool. This paper reviews the relevant literature, and discusses the adequacy and applicability of existing instruments to measure energy poverty. Drawing on those insights, it proposes a new composite index to measure energy poverty. Both the associated methodology and initial results for several African countries are discussed. Whereas most existing indicators and composite indices focus on assessing the access to energy, or the degree of development related to energy, our new index – the Multidimensional Energy Poverty Index (MEPI) – focuses on the deprivation of access to modern energy services. It captures both the incidence and intensity of energy poverty, and provides a new tool to support policymaking.

Retrieved from "https://energypedia.info/index.php?title=Energy_Poverty&oldid=305194"
Categories:
Cookies help us deliver our services. By using our services, you agree to our use of cookies.